Technical Study: What lies beneath

When construction of Nottingham Trent University’s new Confetti Digital Media Hub revealed medieval caves beneath the ground, the project team had to work quickly to protect the find and get the job done – before the students arrived 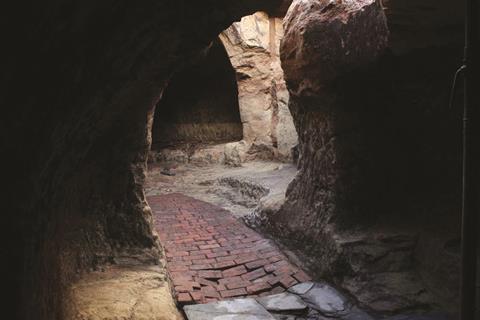 The discovery of two medieval manmade cave in the ground beneath added £212,000 to the cost of building the £9.12m education centre the Confetti Institute of Creative Technologies and Nottingham Trent University, designed by Allan Joyce Architects

The sudden discovery of medieval caves beneath a construction site would typically halt building work. The implications of such an important archaeological find could have a profound impact on both the build programme and costs, which are often borne by the contractor or client.

But in the construction of Nottingham’s new Confetti Digital Media Hub, the discovery of one of the city’s oldest caves thankfully occurred before building work had begun. The incredible find did, however, require a rapid rethink of the proposed piling methodology for the building’s foundations. 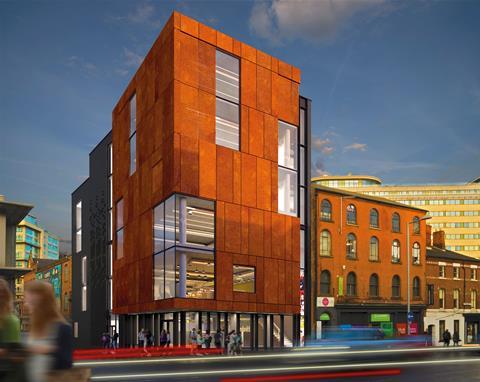 The discovery of two medieval manmade cave in the ground beneath added £212,000 to the cost of building the £9.12m education centre the Confetti Institute of Creative Technologies and Nottingham Trent University, designed by Allan Joyce Architects

The new £9.12m seven-storey education centre designed by Allan Joyce Architects will provide headquarters for the Confetti Institute of Creative Technologies, following its partnership with Nottingham Trent University. It became a design-and-build project at stage four of the contract after planning permission was granted and the procurement of the principal contractor was conducted via an OJEU-compliant, two-stage tender process and a JCT design-and-build 2011 contract with amendments.

There was a hard deadline of September 2018 for the project to complete, because the centre had to be ready for its first student intake. A decision was made to clear the site with a generous gap before construction started because of the high risk of discovering archaeological remains in the ground – which in retrospect was an enlightened move.

“There was always this window of a few months where the site was going to be left empty after demolition, waiting for the procurement and principal contractor to start,” says Marc Preite, project manager at Nottingham Trent University. “We had originally allowed for a watching brief [for an archaeologist] during demolition [of a former office building], but once the Victorian and Georgian foundations were uncovered, then medieval trenches and finally the caves, this turned into 16 weeks. We were very lucky as this didn’t impact on the programme, but there was an additional cost.” 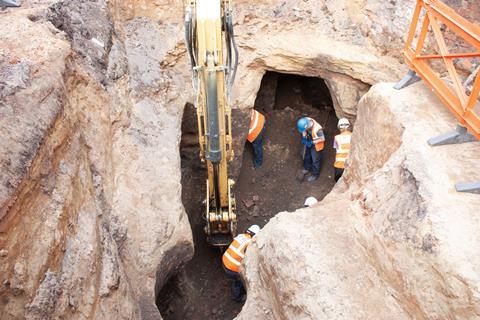 “From a risk mitigation point of view we always put in a large contingency budget against most of our projects, particularly when dealing with underground works,” says Preite. “In Nottingham you just don’t know what you’re going to find, especially as there are so many [manmade] caves in the area.”

Price & Myers structural engineer Sam Paterson had been appointed at stage two of the contract to collaborate with the architect in order to progress the project through planning – and unlike Preite, who describes the discovery of the caves as “the coolest 16 weeks” he has ever spent on site, the structural engineer had a rather more mixed reaction. 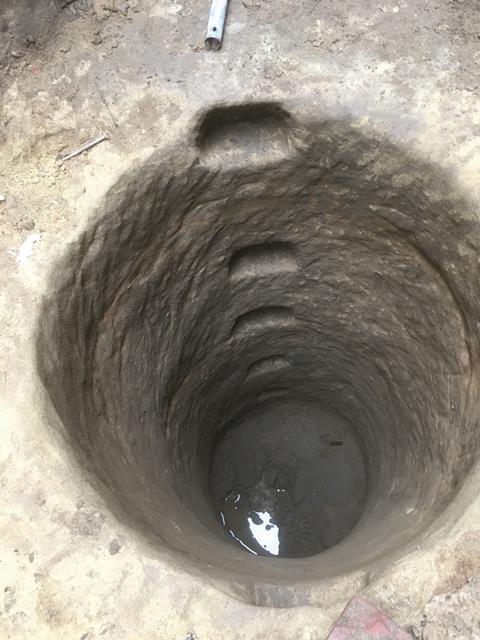 In the caves was found a 700-year-old well

“My initial reaction was one of frustration, but the timing of the cave discovery was quite fortuitous because it happened while we were out to tender,” says Paterson. “It did still mean that we had to work quickly to adapt the design so that it didn’t have a significant impact on the construction programme.”

As the foundation walls of the demolished existing building were grubbed out, the site began to reveal layers of history. These included various square brick pit structures, mostly believed to be Victorian and Georgian, an oven/kiln and a hand-carved spiral stair found to be in excellent condition. The steps of the staircase were capped with Victorian brickwork to provide a more even and durable set of treads and risers. 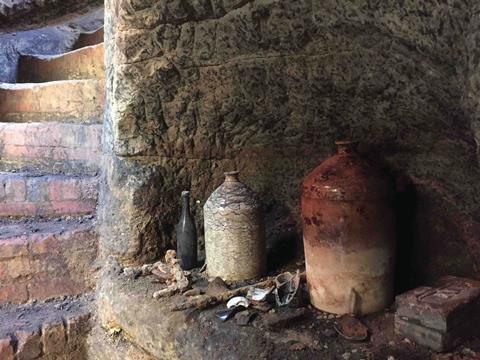 At the base of the stairs, the project team discovered two hand-dug sandstone caves, which were found to contain archaeologically significant medieval artefacts, including fragments of pottery that suggested the site was possibly once home to a medieval kiln and a 700-year-old well. A narrow passage located in the centre of the first, smaller cave opens out to a larger cave, considered to be one of Nottingham’s oldest, which features a sandstone pillar to support the cave’s roof.

The original use of the caves is still subject to research, but it is believed that the smaller cave went on to be used in the late 1830s as a beer cellar for a pub called the Woodlark, which then occupied the site. A sealed flagon full of beer over 100 years old was discovered here.

According to Scott Lomax, city archaeologist at Nottingham council, the discovery of a well containing 14th- and 15th-century pottery is highly significant, because it demonstrates that part of the cave fell out of use during that period.

“This area of the city centre has never been archaeologically excavated,” says Lomax. 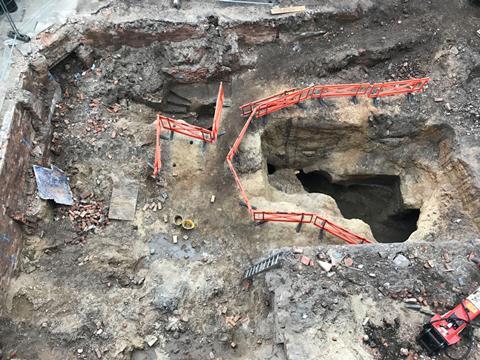 Given the great importance of the caves and their location beneath the new building, Price & Myers had to assess whether the proposed foundation design was sound and would not damage the cave complex. The structural engineer had always planned to adopt a piled solution because the site was covered with a very thick layer of rubble, which was not suitable for foundations to bear on to. But the discovery of the caves meant that the location of the reinforced concrete piles had to be adapted to be positioned away from the caves and embedded into solid sandstone that could sustain the loads.

“We adapted the layout of the piles to avoid the caves,” says Paterson. “What we didn’t want was to start building a pile that was half in the wall of a cave or half not in the cave. We then designed a suspended ground floor slab that rested on the piles and spanned over the caves.”

About 60 piles were drilled into the sandstone across the approximate 32m wide by 14m long site, using the continuous flight auger process, which is virtually silent and vibration free.

Each pile generally measured 450mm in diameter and varied in length from 4m up to 11.5m. At the top of each pile rests a pile cap or block of reinforced concrete. The suspended ground floor, which is composed of a grid of reinforced concrete beams standing on the pile caps and in-situ concrete slabs laid between the beams, spans over the caves. 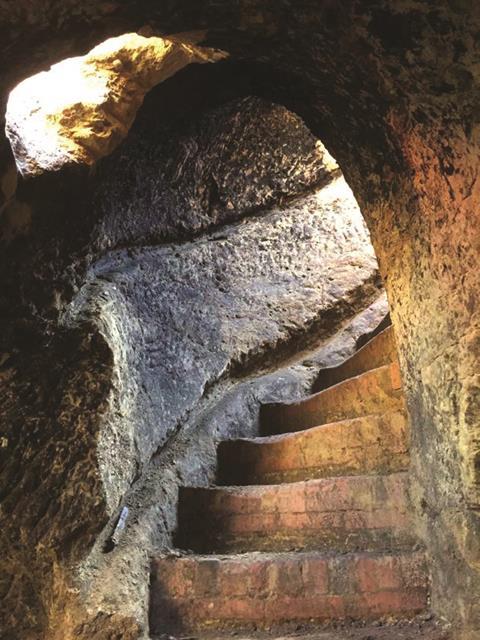 The building’s frame is also fully exposed concrete, with all the soffits and walls being of the same material. Specifying concrete for the building’s structure was a joint decision between the architect and engineer.

Surprisingly, it wasn’t rethinking the building’s foundations following the discovery of the caves that was the most challenging aspect of the project for Price & Myers. Paterson says it was a combination of the very tight time scale and resolving the first-floor 2.5m cantilever that supports the upper floors of the building. The caves’ existence did not impact on that tight deadline of September, because the schedule had time already built in for archaeological investigations.

The caves have been filled with sand left over from the excavations of the sandstone but could be accessed in the future if deemed necessary through a concrete floor panel featuring a special joint allowing it to be easily removed. Preite is pleased with the way what could have been a major problem has been managed. “The generous amount of time we set aside for the excavation enabled the archaeologists to work in a very timely, careful and controlled manner,” he says. “Usually, we’re under pressure from contractors and developers, but this project allowed us, as a city archaeologist said, to do one of the best processed archaeology digs in modern history.”