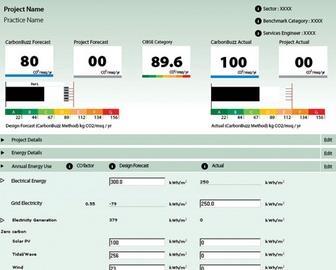 A new online database of buildings’ energy and emissions performance, before and after completion, will compare the predictions with reality – and give engineers the chance to teach architects a thing or two about sustainable development.

Engineers will be able to benchmark the energy consumption and emissions of their designs against similar schemes under a new CIBSE/RIBA initiative called CarbonBuzz. The online platform, due to launch on 5 November, will create a sector-by-sector monitor of UK buildings’ energy use and provide the two institutions with a framework for good practice.

CIBSE and RIBA are urging UK designers and engineers to contribute information to the platform, which can be done anonymously if preferred, to help raise awareness of emissions of building types – schools, offices, and so on.

CarbonBuzz emerged from a collaboration between XCO2 Energy, a low-carbon consultancy, and the architect Aedas on the Green Book, a carbon footprinting initiative by the practice. Ricardo Moreira, director of XCO2, says they discovered a “lack of understanding and available benchmarks” and saw the need to make architects more concerned with emissions.

CIBSE, RIBA and BRE came on board as main project partners. A funding bid was submitted to UrbanBuzz, a University College London initiative that promotes sustainable buildings. “With the funding we have a great opportunity to get architects to ask their engineers important questions earlier on in the process and at the same time get engineers to question themselves about the energy consumption of buildings early on.”

Bill Bordass of the Usable Buildings Trust, a charity which promotes greener buildings, was approached in the early stages of CarbonBuzz to be an adviser. “Aedas came to me with the idea about a year ago and I advised them to contextualise it with what was happening with energy certification and with CIBSE,” he says.

“There’s a big problem internationally in reporting the performance of buildings. Conventions are not transparent. So Carbon-Buzz is a brick in the wall. I don’t think it answers all the questions but it’s certainly a useful step forward. There needs to be clearer conventions for services engineers to report to architects. The main thing architects know these days is whether a building fits the regulations; that’s as far as their concern goes, and why CarbonBuzz was initiated. The second aspect of this project is to get engineers comparing their options.”

The database asks a series of questions about what’s going into the design of the building and generates a breakdown which tracks energy consumption, both predicted and post-construction, classifying it under different building types. It also provides the option of a breakdown for different energy types and sources of use in the building. Data will be handled confidentially unless the originators agree that the information can be released.

Hywel Davies, CIBSE technical director, says: “CarbonBuzz is all about trying to get architects to take carbon seriously. Some architects have been trying to do so for quite some time, personally and in their practices, but the difficulty they’ve had is that there’s a certain amount of engineering needed, plus sometimes the clients don’t want to talk to the engineer at that early stage.

“Many architects haven’t been so committed, perhaps because they haven’t seen it as important or they haven’t known where to go to get advice. CarbonBuzz is trying to say to architects, ‘How can we help you and what tools can we give you to reduce the emissions of your architecture?’ ”

The tool has been tested by a number of companies, including Mott MacDonald and BDP. Ahead of the launch next month, an open invitation was issued to engineering and architectural practices to attend pilot workshops at RIBA headquarters in London, on 1-3 October.

Davies was among those due to attend. “The crux of the workshops is sharing the concept and sharing our enthusiasm so that people go away feeling that this is something they want to get involved in. RIBA has a Carbon Conscious Practice scheme to recognise good practice, CIBSE has its low carbon consultants, and it’s a great opportunity to raise awareness of both and get people to join in.”

Discussions are continuing about the future funding of the project. This will be shaped by the success of the pilot scheme and the response from the industry. Davies says: “It can’t continue on a long-term basis with institutional funding. We have got some ideas and we think we can keep it running long term.”

Engineers and architects will help to build the database by submitting details of their schemes. Design forecast data relates to Part L or M&E report values. Ideally, details of services engineer and analysis software used would also be noted. Post-completion data can be obtained through energy bills, results of a post-occupancy evaluation, TM22 energy assessment or similar. For both forecast and completion, two main categories are required: