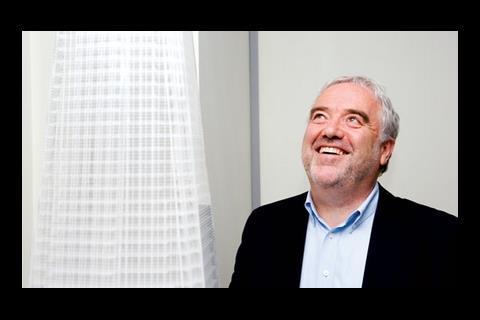 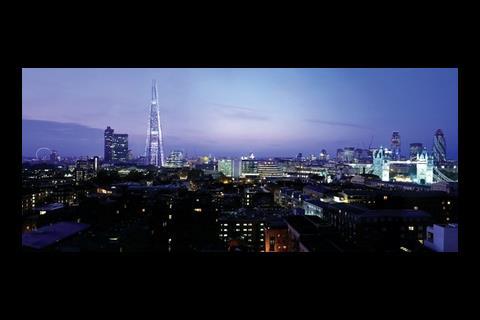 ‘Ultimate project manager’ Bernard Ainsworth is ready to perform his next miracle on the Shard at London Bridge, and he’ll rip up the plans and start from scratch if it gets the controversial scheme completed. Roxane McMeeken went to meet him

When Bernard Ainsworth was parachuted in to run the construction of the Shard at London Bridge last month his first act spoke volumes: he ordered all the walls inside the project’s headquarters to be ripped out.

Now, the office at 40 Bermondsey Street is open plan, which means teams from the firms on the job – from Mace, to Davis Langdon, to the newly appointed Turner & Townsend – can chat across the room.

“I don’t like walls and I don’t like emails,” explains Ainsworth. “It’s much harder to have a go at someone when you’re face to face.” In fact, it’s hard to imagine Ainsworth shouting at anyone, although he assures me it happens occasionally. When we meet at the project HQ, where his new bosses at developer Sellar Properties are also based, he is more like a kindly uncle than the killer project manager his reputation suggests.

Ainsworth patiently poses for a seemingly endless stream of photographs and keeps smiling when asked for the umpteenth time whether the project to build Europe’s tallest tower will actually happen.

The questions aren’t likely to stop any time soon, either – there is a lot of scepticism about the 72-storey building, most recently after the withdrawal last autumn of one of its financial backers, CLS Holdings. Although it was rapidly replaced by a consortium of Qatari investors in January this year, some still question the need to build the skyscraper at all, let alone on top of one London’s busiest train stations.

Ainsworth shrugs off the sceptics, and reveals he is poised to award two key contracts at the end of June – piling and facade – which will prove once and for all that the project is going ahead. “If people don’t think we’re serious, wait until we start placing orders,” he says.

Cladding firm Scheldebouw is the favourite to supply the facade, although not yet formally appointed, and Stent is tipped for the piling, which is scheduled to start on 5 January 2009. The project’s completion date has been set for the end of 2011.

Certainly it seems that if anyone can make the Shard happen, it’s Ainsworth. One industry insider describes him as “the ultimate project manager”. The 60 year old’s track record, which includes bringing in the Millennium Dome on time and £40m under budget as project director, reads like a hall of fame of construction projects.

Most of his career was at Laing, where he spent 34 years. He has spent the past three years at Atkins as major projects director, during which he was seconded to Metronet, the London Underground consortium. In 2002 he was also chief operating officer on the 2002 Commonwealth Games in Manchester, a project which, like the Dome, came under heavy fire in the press, but was finally hailed as a success.

So what’s his secret? Ainsworth’s overriding quality seems to be simply how incredibly nice he is. A source on the Shard team says: “He’s a really good guy. He talks to everyone and brings a real buzz to the project.” Even as we’re walking through his office Ainsworth introduces Angelica, the receptionist, and Monday, the security guard, and has little chats with both of them. Pretty impressive, considering he’s only been working here for five weeks.

“I think I relate to people well,” he says.

“I always walk around and talk to people on site. I went out and presented some safety certificates the other day here at London Bridge. You have to be very visible.”

You shouldn’t be scared to change teams. It might be difficult at the time but if that’s what’s best for the project you have to do it.

He also believes in trusting everyone on the team. “If you give them responsibility they will respect it and work for it. They’ll get personal satisfaction from it too.”

Don’t let all this niceness convince you that Ainsworth is a soft touch, however. He is scrutinising every element of the Shard plan and appears to be fully prepared to tear it up if necessary. “You shouldn’t be scared to change teams. It might be difficult at the time but if that’s what’s best for the project, you have to do it,” he says.

This is exactly what he did on the Commonwealth Games. “It was going so well that 12 weeks before the Games we were in danger of resting on our laurels,” he says. Instead of letting this happen Ainsworth called the project team to a meeting lasting the whole of a three-day weekend. “We threw every kind of scenario at them – the Games team, the local authority, the police and the fire services. At the end of it we found we had some holes and some failures in certain people, so we replaced them.” He’ll be doing the same on the Shard.

This demonstrates another principle of the Ainsworth school of project management: constantly thinking about what could go wrong. He’s applying this principle to the Shard, starting with the budget. He will be going through all its components, including every specialist contractor’s package. “We are starting to look ahead and asking what the challenges are, and whether we have the right teams, contractors and prices.” He is also planning to buy materials as far in advance as possible to control costs.

He stresses, however, that the appointment of project manager Turner & Townsend, announced two weeks ago, was not part of his new regime and planned before he was involved the scheme. But he did play a major part in the selection process. T&T was chosen from a shortlist of three because it put forward a particularly senior team. The team of six, led by Tim Coleman, the firm’s UK director, is due to increase to 15 as the project picks up.

But once Ainsworth does get to grips with the Shard, the fine-toothed comb approach that enabled him to knock £40m off the price of the Dome bodes well for the project, which has had questions raised about its reported £350m budget. Mace started the scheme on a construction management basis, but that then switched to a fixed-price contract. Now the firm has been given until autumn to produce the final quote.

So, how much will it cost? Ainsworth responds with a good-natured laugh. “Look, I don’t know where this £350m figure came from – £350m for what? The tower, the whole scheme, for London Bridge Place? I have got a budget, but I’m afraid I am not prepared to tell you what it is. When we have finished taking the budget apart I believe we will start to get value for money.”

Either way, under Ainsworth the Shard finally appears to be speeding along. His mastery of project management leaves you wondering why he isn’t running the Olympics. “I was never asked,” he says, though he admits that the role of 2012 construction director was mentioned to him before his friend, Howard Shiplee, got the job.

In any case, it sounds like the role would not have been hands-on enough for Ainsworth. “I am not a consultant,” he says, firmly. “I like to be hands-on, be responsible and dictate the end result.”

What should be at the top of the tower?

Shard architect Renzo Piano has been talking to the bishop of Southwark about the possibility of putting a church on the building’s top floor, but it seems unlikely the project’s Qatari backers will be massively keen on the idea. So what else could occupy such a prime spot? A Starbucks perhaps? The old classic, a revolving restaurant? Or a Russian oligarch’s penthouse?

… about to return to the Dome to see Kylie in concert. “It’s honestly not my thing – my wife is a fan!” he says.

… project managing the construction of his own house on the island of Hoy in Orkney. “I was planning a traditional design until the architect [local practice Pentarq] persuaded me to go for something daring, involving lots of glass.”

… a fan of Leonard Cohen. His favourite album is Songs from a Room (1969). “It’s a dirge but I like his melancholy voice – it’s relaxing.”

… married. He has been with his wife Rosemary for 32 years. “I couldn’t do this kind of work without a soulmate to go home to.”

… living in a pad in Primrose Hill, but his home is in Huddersfield, Yorkshire.

… an OBE. He was awarded the title in 2001 for services to construction

Send your suggestions to building@cmpi.biz