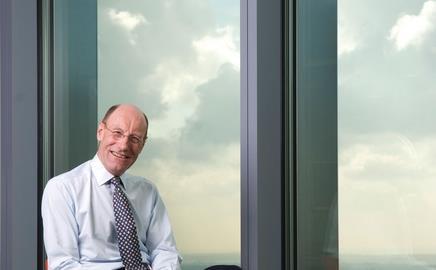 As chairman of the ODA, John Armitt is charged with the unenviable task of delivering the Olympic project on time and (ahem …) on budget. And while he doesn’t shirk his own responsibility, he has a clear message for contractors: united we stand, divided we’re lumbered …

W hat do people not know about John Armitt? The Olympic Delivery Authority (ODA) chairman pauses for maybe 15 seconds. Slowly, cautiously, he says: “I’m not sure there are many things that people don’t know about me.”

This response is in character. This is a man who is all about the job. Getting him to talk, comfortably at least, about anything else is almost impossible; all attempts to divert the conversation are switched expertly back to the Olympics and the construction industry.

Time clearly weighs heavily on the chairman’s mind. His corner office has two clocks in it, one digital and one analogue, alongside photos and editorial cartoons dating back to when he was chief executive of Network Rail. “We must finish by 9.30,” he says, tapping his watch. “I have another appointment to get to.”

Armitt was brought in to the ODA eight months ago and since then things have begun to stabilise after a turbulent two years. Not only has the authority had to weather the storm over the Olympics’ ever-increasing budget – from £3.7bn in 2005 to its current £9.3bn – but it has also seen the departure of its first chairman, Jack Lemley, amid talk of political squabbling and friction with ODA chief executive David Higgins.

Armitt admits that the board has had a little settling down to do since he took up the post, but he is quick to praise the work of interim chairman Sir Roy McNulty. “Roy undoubtedly brought some stability and structure to the situation,” he says, “and therefore from my point of view it’s been a relatively straightforward process.”

Lemley’s departure even had an upside, he says. “Going through a difficult period with Jack has helped the board cement its own internal relations and has also helped us to think about what we should do if things are not working as perhaps we had hoped.”

Fortunately, things appear to be going more or less to plan. Armitt says the year’s targets, or “milestones” in ODA parlance, are being hit, the stadium is due to start construction three months ahead of schedule and the building of the other venues and the park (the “big build”) will be in full swing by the time the Beijing Olympics start in August.

When it comes to how much of this success is due to the man himself, his past achievements have to be taken into consideration. Armitt has repeatedly won plaudits for his strong, no-nonsense leadership. A former colleague at Costain, where Armitt was chief executive from 1997 to 2001, says of him: “When he came to Costain, we needed leadership and we needed a figurehead. He brings authority, he employs detachment where it is needed, and he gave the company tremendous confidence.” Not only that, he turned the group’s fortunes around. Costain was £62m in the red when he arrived, and £6m in the black when he left.

The ODA did not need such correction. Armitt’s first major job there was to ensure contractors were found for the “big four” venues – the stadium, aquatics centre, media centre and velodrome – and eight months on the process is on the verge of completion, with Sir Robert McAlpine, Carillion and Balfour Beatty due to take on the work.

As Bovis Lend Lease is expected to build the bulk of the Olympic village, it looks like the Games will be British-built. But Armitt insists that that was not the board’s intention. “That’s just the way it turned out,” he says. “But think about it. If Paris had won the Games, how many British contractors would have decided they’d go and build the stadium in Paris? Very few, I suspect.”

He does add that if the work had gone to a non-UK group there may have been the danger of another Wembley stadium. “I think if you were coming into the UK market for the first time on a job as high profile as this, as an ex-contractor I would say that is pretty high risk.”

I’m a pretty infrequent churchgoer these days, but being brought up in a Methodist household, going to church two or three times every Sunday has got to have some sort of influence on your attitude to life

With finding the contractors ticked off his to-do list, Armitt’s next task is the unenviable one of ensuring that a high-quality Olympics gets built on time and budget. He is in no doubt which is the most pressing. “Time is the fundamental issue. We cannot be a day late. Many jobs have been described as being completed on time, but more often than not, it has not actually been finished on the day that was specified five years previously. We don’t have that luxury.

“Can we achieve that completion and keep the cost down and provide something we and the UK construction industry and everybody else involved can be proud of? That is what we are aiming for.”

He adds that the other problem of having such a strict deadline is that there is a risk of contractors asking for any amount of money to meet it. “Very often the way that contractors get the client over a barrel is when the client keeps changing its mind,” he says. “That means there is a strong discipline on us that when we have specified something, we don’t come along and say, oh, can you incorporate this or change this.”

The buck stops with the ODA, he says, but it is also in the interests of the contractors to work to an agreed budget. “If you were a contractor, what would you want to do?” he says. “You’d want to get in, and get out, build a great building, make some money along the way, and repair some of the damage in people’s minds as to whether the UK construction industry can perform or not. This will be one of the most public projects that contractors are likely to do for a long time, in a glare of publicity, for as long as they are on site. The contractors are going to be right there in the spotlight with us.”

In spite of this stern warning, Armitt clearly has a great fondness for the industry. The bulk of his career was spent at John Laing. He spent 21 years there, becoming chairman of its civil engineering and international divisions, before leaving in 1987. He knows as much an anyone about how construction works. “The way you overcome these things and where you maximise the likelihood of success is in the personal relationships – between architect and contractor, contractor and subcontractor. In any of those relationships, if one person is constantly trying to get one over on somebody else, then sooner or later it will turn into a hostile relationship. The best thing to do is to say: you’ve got some skills, I’ve got some skills, let’s respect each other and use them to our mutual benefit.”

He may talk about personal relationships, but it’s difficult to get a feeling for Armitt’s personal side. As the former chair of health and safety for the Major Contractors Group and the man in charge of Railtrack at the time of the Potters Bar disaster, you would expect him to reveal a highly personal response to health and safety. But while it’s clearly something he believes in fervently, the talk is all about “demarcating pedestrian and vehicle access” and “line management responsibility”. Important of course; but hardly evidence of a personal crusade.

It’s fair to say he’ll never be mistaken for one of construction’s big personalities; not for him the showmanship of a Ray O’Rourke or the charm of a Bennie Kelly. But for Armitt, that doesn’t matter: “People often say of someone, they’re a big personality, but more often that not what gets things done is people working together, having mutual respect. If the ODA can foster that, then the teams will deliver. There’s no doubt about it.”

Finally, however, Armitt reveals a glimpse into his life away from the Olympics – although only after the longest pause of the interview: “I’m a pretty infrequent churchgoer these days, but being brought up in a Methodist household, going to church two or three times every Sunday has got to have some sort of influence on your attitude to life. That certainly shaped my view of the world.”

How? Frustratingly, the shutters come down again. “On the other hand, the thing about the construction industry is it has a very strong team approach to it …” he begins. And so we are back to business. Although he won’t be drawn on it, it’s not hard to see the dogged Protestantism in Armitt. The hardworking disciplinarian with a strong sense of right and wrong doesn’t need to open up. All he needs to do is get the job done.

… architects
If I hadn’t been an engineer, I would have been an architect. As a contractor I’ve done my fair share of tearing my hair out over architects, but I think good architecture plays such an enormously important part in the fabric of society.

… golden rabbits
When I was at Network Rail, all of the regions would compete to see who could get their delay times the lowest each month. The best performer would get the golden rabbit. The chief engineer went and bought it from a garden centre, and spray-painted it gold. It was worth about £2. I wouldn’t be surprised if it pops up again at the Olympics.

… sports
I played rugby when I was at school, but I was never that good because I seemed to move from position to position, from forward to wing to full-back. I was tall as a child but I wasn’t that heavy. In the end I couldn’t stand the eight pints a night thing. These days I tend to go fishing.