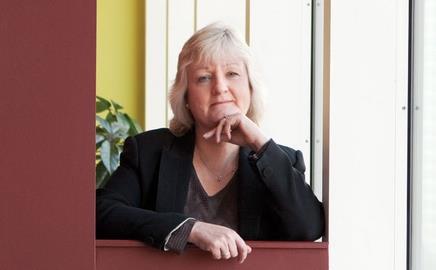 What do you mean, ‘who is Diane Rampling?’ Didn’t your mothers teach you nothing? She’s only in charge of Defence Estates’ new procurement strategy, and she’s only got £20bn worth of bleedin’ work to dish out. Now then you miserable creatures, on the double, Major Emily Wright has a briefing

If the name Diane Rampling doesn’t ring any bells, you may need to improve your reconnaissance effort. She is the civil servant who is overseeing the Ministry of Defence’s reorganisation of the way it procures construction services. She has the task of developing its strategic direction, and will have a big role to play in deciding who gets what in the new regime. And as the ministry owns about 1% of the UK’s land mass, has a construction portfolio worth something like £20bn and is about to take £2.5bn of new work to market, this makes her a person worth getting to know.

Rampling, who has been the commercial procurement and programme director of the MoD’s Defence Estates department since November 2008, is fully aware of the effect the recession has had on the balance of power between clients and suppliers. During the boom, big clients saw frameworks as a way of making sure that they would be able to find suppliers, and do so at a predictable price. Now that the recession has set contractors and consultants scrambling for work at ever decreasing margins, the commercial rationale for frameworks has gone. This, in effect, became official when Steven Morgan, BAA’s capital projects director, scrapped its major projects framework: it was the airport operator that had come up with the idea in the first place. The general expectation was that other clients would follow its lead, and many duly did – the latest being Defence Estates.

Like Morgan, Rampling argues that this departure from what used to be regarded as best practice will give many firms a chance to win work that used to be divided among 14 preferred contractors. But the main reason she is instituting these changes is because she “wants to get more for less … We’re looking to adapt the current suite of contracts to provide the most cost-effective mix of procurement vehicles for future contracts … and achieve best value for the taxpayer”.

Another purpose of frameworks was to promote partnering between client and supplier. It was this idea that Morgan rejected in favour of what some call simple commercial logic, and others exploiting the buyer’s market. Rampling is guarded about Defence Estates’ position on partnering.

She denies that the ministry will get tougher as a client, but she does believe that its relationships need a more commercial context: “We want to promote partnering. But partnering and partnership are not the same thing. We have to think about how we can be a better client and how we can make a profit.”

How the new system will work (probably)

Since 2001, Defence Estates has used a prime contracting system. This divides the UK into five regions, each run by a single contractor with the job of organising between £400m and £750m of work over a seven-year period. Alongside this is a £700m project to build the Defence Technical College in St Athan in the Vale of Glamorgan and the multibillion-pound SLAM programme for the renovation of forces housing, much of which is procured using the PFI.

The Next Generation Estates Contracts programme (NGEC), which is expected to be up and running by the end of the year, looks likely to transform this system. The complete details have yet to be finalised, but Rampling says she is “seriously considering” a system similar to BAA’s, whereby contracts worth more than £25m are let using competitive tendering, those less than £10m go to a framework and projects in between are competed for by three of four framework contractors.

Rampling says: “Introducing framework arrangements for projects up to a certain value is one option. It’s not confirmed, but one plan could be that projects up to £15m are injected into regional primes, providing you can prove value for money. Projects between £15m and £50m could go through a framework and then anything over £50m would go out for competitive tender. It will be broadly along those lines.”

The MoD intends to make its new system as transparent as possible, which will come as a relief to those who have struggled to understand the prime system. Rampling admits that it has had problems with coherence. For one thing, the prime contracts were let over a long period of time, which meant that lessons learned from the creation of one contract were carried over to the next. Therefore, no two contracts were the same. “One of the things that didn’t happen last time is that we didn’t get complete coherence,” says Rampling. “We hope that this time around they will all be the same contract so there is more coherence.” She adds that one way of achieving this would be to begin the new contracts on the same day.

It will set up a central body to oversee its entire collection of contracts, and it will advertise places on frameworks as well as tenders through the Official Journal. Prequalification questionnaires will have to be returned by the autumn, tendering will happen in 2011 and the programme will kick off in 2012.

But how will they be affected by the evolving crisis in Britain’s public finances? Rampling stresses that the upkeep of the estate will not be neglected. Jobs, though, have had to be prioritised. Top of the list will be those programmes required by law. These will be followed by mandatory MoD requirements – such as tackling safety problems – then routine maintenance and, finally, improvements to the existing stock. Rampling says this programme of work will provide plenty of opportunities for all. “Because of the size of some of the jobs, we are initially going to be looking at a group of large contractors,” she says. “But we want to ensure that our new principles flow down the supply chain so that smaller and regional firms can benefit, too.

“For those who want to get involved, our industry days are a great way for companies to network [see below]. SMEs could come along and start talking to larger companies about becoming part of a potential supply chain.

“We are looking for companies across the board but expertise in maintenance is particularly useful, as is housebuilding. Clearly if contractors have experience of modular construction or housing then it’s entirely relevant.

“We can’t judge applications on what we know about a company or its reputation,” she says. “We can only judge on the answers to our questions in the prequalification questionnaire. It would be good not to get a standard sales pack but to see evidence of companies who have read the questions and given us the information we’ve asked for.

Rampling reassures anyone wanting to get involved as a new member of the supply chain that all parties will be given equal information: “We have around 14 contractors in a supply association and we will continue to meet with them about current contracts. But we will be very careful that they are not given an unfair advantage over members who are not yet part of the supply chain.”

It is clear that Rampling knows what she is looking for: the best team for the best value for money. Now, any volunteers?

Diane Rampling has more than 30 years of experience in commercial procurement for public and private sector companies, and has been a civil servant for the past six. Her previous roles include commercial director of the Passport Service and most recently the Home Office’s director of major programmes. She joined Defence Estates in November 2008 as commercial procurement director and so it is her responsibility to oversee its Next Generation Estates Contract programme.

Defence Estates is open to suggestions on what the programme should look like. Mike Pearson, the NGEC’s programme manager, explains that two industry days have already been held and more are to come. They are attended by current and potential supply chain members, from SMEs to large contractors. “We want to engage the industry. What we’re saying is, ‘we have this knotty problem, how can we sort it out?’ We’re very interested in what the industry thinks a good contract would look like. So far we get the impression it should have a degree of definition and should be flexible to allow innovation. But when we’re developing this programme it can’t just be a case of us saying to the Ministry of Defence board, ‘well, we just think this is a jolly good idea’. It has to be based on evidence and that’s where the industry comes in.”