Glasgow terrorist attack: The day I tackled a terrorist 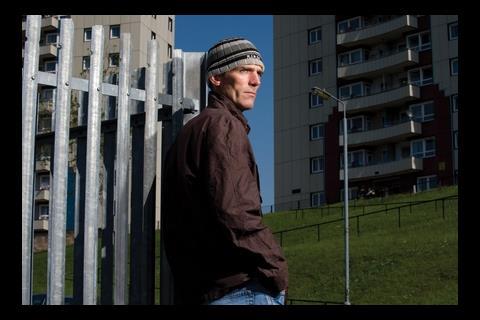 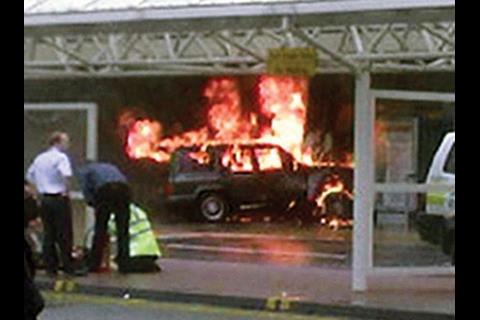 Construction worker Stephen Clarkson was caught in the middle of a terrorist attack on Scotland. One year on, he just wants to get back to normality, and playing a part in Glasgow’s urban regeneration may be the answer. Matthew Baker meets a reluctant hero

On 30 June last year Stephen Clarkson was waiting to pick up his brother outside Glasgow airport when he heard screeching tyres. Then came the explosion. A thick pall of smoke began to rise from a burning Cherokee Jeep loaded with gas canisters that had just been rammed through the terminal building and the stench of petrol filled the air.

Police were on the scene within minutes as panic-stricken passengers ran from the burning wreckage. Clarkson, a 42-year-old construction worker, watched in horror as one of the men who had been thrown from the jeep picked himself up off the ground and began to walk towards him – engulfed in flames.

“He was very strong and trying his best to evade capture, throwing punches at the police as they pursued him,” recalls Clarkson. “The police sprayed CS gas and it got to me because he was coming in my direction. As he got closer, I just reacted instinctively and ran at him, knocking him down with a forearm smash.”

The man was disorientated and shouting gibberish, says Clarkson. “His hair was on fire, his clothes had virtually burned away and I could smell his skin smouldering. All I remember was the rage I felt wash over me. I had got some pepper spray in my eyes and that made me mad too. I knew they were terrorists and all I could think of was the fact that they were trying to take away people’s lives for stupid reasons. I had just watched my partner fight hard for five years to stay alive before she died of cancer. What right had they to try and take away anyone’s life? After that the adrenaline took over and I just lunged at him. The next thing I knew, the police got on top of him and restrained him.”

Almost a year later, Clarkson seems awkward as he talks about his response to the first terrorist attack to target Scotland. Despite receiving bravery awards from Gordon Brown and Alex Salmond, the first minister of Scotland, he does not see himself as a hero. “I was glad I acted in the way I did but I don’t see what else I was supposed to do,” he shrugs. “Loads of people here would have done exactly the same. Glasgow is that kind of place. We’re not going to let terrorists get away with stuff like that. I realise hundreds of people could have died. But for me I was simply dealing with a lunatic who had to be stopped. I just want to get on with my life now.”

For most people, being involved in the Glasgow airport incident would have overshadowed everything else that year. But Clarkson also had to deal with losing his girlfriend of 20 years to cancer and a health scare of his own after collapsing on new year’s eve 2007 with a brain aneurysm.

But now, five months on from his illness and almost exactly a year after the terrorist attack, he is ready to return to work.

“It’s been a difficult year,” he says. “I lost my girlfriend, found myself in the middle of a terrorist plot and then thought I was going to die. But I want to go back to work now and get some normality back.”

With 1,000 homes set to be built in Glasgow as part of the city’s regeneration as it prepares to host the 2014 Commonwealth Games, Clarkson wants to get back to working on site.

“I’ve been in this trade for a long time and I like seeing new builds progress,” he says.

“I can do slabbing, site clearance, monoblocking, drainage work, laying the foundations, excavation, turfing, you name it. I like the sense of renewal and change. Glasgow is going to see a lot of regeneration in the lead-up to the Commonwealth Games and people in construction are really excited. The building industry is booming and there’s a real buzz about the place.”

He says getting back into a familiar routine of hard landscaping will help draw a line under the past 12 months. And the chance to play a part in helping build a Commonwealth Games legacy has focused his attention on his work.

“I’m a proud Glaswegian and it gives me great pleasure seeing the city develop,” he says. “I’ve always been interested in architecture and I’m a big fan of Charles Rennie Mackintosh. I love the Mackintosh style; he left Glasgow with a great legacy – the Glasgow School of Art, the Hill House, these are great buildings.”

So what next for Clarkson? “I’ve been grieving for my partner for some time now and I just want to get back to doing something useful. I’ve always had a strong work ethic and I want to get back to some normality. I see getting back into the trade as a way to aid my recovery and make me feel sane again after the ordeal of the past year.”

The Glasgow International Airport attack occurred on Saturday 30 June 2007, just after 3pm. A Jeep Cherokee loaded with propane canisters was driven into the glass doors of the main airport terminal and set ablaze.

Security bollards outside the entrance stopped the car from entering the terminal, although the doors were damaged. The car’s driver was severely burned in the fire and five members of the public were also injured, none seriously, including some who helped the police to hold the terrorists.

Both of the car’s occupants were caught at the scene, and all those injured were taken to the Royal Alexandra Hospital in nearby Paisley. Three days later, Scotland Yard confirmed that eight people had been taken into custody in connection with this incident and the unsuccessful car bomb attacks in London the previous day.

Police identified the two men as Bilal Abdullah, a British-born, Muslim doctor of Iraqi descent working at the Royal Alexandra Hospital, and Kafeel Ahmed, also known as Khalid Ahmed, the driver, who was treated for severe burns at the same hospital. A suicide note indicated that the two had intended to die in the attack. Ahmed did eventually die of his injuries, on 2 August.

It was the first terrorist attack in Scotland since the Lockerbie bombing in 1988.