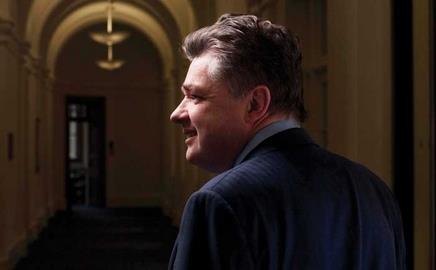 Buried in the supporting documents of last December’s pre-Budget statement was an announcement that could turn out to be the single most important policy change of the year. The creation of Infrastructure UK – the merging of a number of different bodies with the Treasury’s PFI team – could herald a radically different approach to the financing and planning of infrastructure in the years ahead. Instead of looking at piecemeal ways to fund individual PFI and PPP projects, the new organisation has been charged with plotting a 40-year course for the country’s infrastructure.

The man at the Treasury ultimately responsible for it all is Ian Pearson, the economic secretary. We meet a few short weeks before a Budget which, as well as presumably kickstarting an election campaign, will also contain some serious policy. Included in the chancellor’s speech will be Infrastructure UK’s diagnosis of where the country is at in terms of infrastructure – road, rail, energy, utilities – and what needs to be done to get it on track. Most speculation has focused on the potential setting up of a government-backed “infrastructure bank”, but there is also the possibility that moves will be made to bring institutional money – mainly pension funds – into the sector. So how does Pearson see these changes coming about?

The amount needed to fill the gaps in UK infrastructure is estimated at anything up to £500bn over the next 10 years. Despite Pearson’s claim that Labour has marshalled a public and private investment of £1.25trillion (£1,250bn) in infrastructure in the UK over the past 13 years, the holes aren’t hard to spot. Predictions that the country’s energy network will struggle to meet demand from 2016 onwards are the most obvious signs of a crisis in this area, but equally pressing is the need to update existing infrastructure to meet the government’s incredibly ambitious carbon emissions target. Add to that the expressed desire of all political parties to bring the UK in line with continental Europe with a new high-speed rail network, and the scale of the challenge is clear.

Pearson is frank about it. “We all know that much more needs to be done,” he admits. “I’ve always believed that to compete successfully in the long term we have to have a world-class infrastructure.” So far, so much motherhood and apple pie. But at least Pearson can fairly claim to have a governmental track record that speaks of an understanding of these issues. His first major assignment was as Northern Ireland minister (2002-2005), where he pushed through the province’s infrastructure strategy. As trade minister he did a large amount to sell the PFI model internationally, and, possibly most significantly, he signed off construction of the £2.2bn Thames Tideway tunnel as environment minister in 2007.

But that was then. We’re in a different world now, with a ballooning public debt and private financing markets that have lost all appetite for risk. Surely talk of building £500bn of infrastructure is exactly that – just talk? Pearson disagrees: “Over the next 10 years,” he says, “we can actually do even better in what’s going to be a tight fiscal environment. That’s got to mean using government capital resources as efficiently as possible. It’s going to require ensuring we’ve got the right environment for private sector investment in infrastructure, and it’s going to need innovative funding mechanisms.”

The most widely speculated upon innovation, following a story in Building in January, has been the idea of an “investment bank”. “I can safely tell you we’re looking at a number of options,” he says, “including some form of state investment bank. I’m very clear there is a need to ensure the right financing mechanisms are in place to deliver the infrastructure we need.”

What this means, in non-politico speak, is that we are likely to see some form of financial institution announced to support infrastructure, but it probably won’t take the exact form of a bank – in part because of the regulatory implications that would have, and in part because of a sense that banks aren’t the most popular institutions with the electorate right now. Pearson admits that Sunday newspaper speculation that the government has been studying the model of KFW in Germany – a bank set up under the Marshall plan to reconstruct the country after the Second World War – is correct, but cautions against reading too much into it. “We need something directly appropriate to the UK’s circumstances,” he says. So for the moment, exactly how the institution will work is being kept under wraps.

However, government sources suggest Infrastructure UK’s Budget report will include five key recommendations. As well as the bank that isn’t a bank, there will be recommendations about how to get pension funds in particular to invest in infrastructure. Before the credit crunch, pension funds used financial instruments called monolines to control the risk of investing in infrastructure schemes. Monolines were effectively wiped out by the crash, so pension funds, which will only generally invest in triple-A rated schemes, have largely exited the market. Officials are clear that the setting up of some other kinds of intermediaries that allow pension funds to reduce their risk, particularly during the construction phase of infrastructure projects, is high on the agenda.

The obvious concern though, about all these plans, is what happens under an alternative government. Tory shadow chancellor George Osborne has been making noises about restricting the PFI model, saying schemes haven’t ended up transferring enough risk to the private sector, but Infrastructure UK seems to take the continuance of public-private partnership vehicles as a given.

Pearson isn’t so worried about this – he thinks Tory noises on PFI are just electioneering, and that PPPs will continue under one name or another with any government. But he is concerned about the Tories’ proposals for the planning system, particularly the possibility of giving neighbours of a development the ability to appeal decisions. He says: “I have some strong concerns about whether it would produce gridlock when it comes to major infrastructure projects.

I’m just not convinced they’ve thought this through properly.” It’s a fear shared by many in the construction industry.

The exact details of the infrastructure package in the Budget will not be known for a couple of weeks, and the extent to which they will be supported by an incoming Tory administration is likewise unknown. But it is surely rather heartening that, through Pearson, an administration as long in the tooth as this one is at least willing to look at trying things differently.