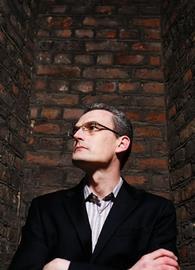 Ché Wall, Sustainability Champion of the Year at the Building Services Awards, is a man of the world but he believes keeping it local is the key weapon of the green movement. Will Jones talks to the Brit, living in Australia, who’s named after an Argentine Marxist

“I didn’t exactly thank my parents for my name while I was at school; I took some stick for it.” Growing up in the UK in the 1970s, as Wolfie Smith proclaimed “power to the people” on television, Ché Wall had to contend with gibes from classmates. His hippy parents chose the names of left-wing reactionaries for their offspring. Wall’s brother was named after the psychologist and LSD guru Timothy Leary. “Oddly enough, Tim didn’t attract as much attention as that of a certain freedom fighter,” he smiles.

At 37, Wall is managing director of the Australian building services and environmental engineer Lincolne Scott and has been named one of Australia’s True Leaders by Australian Business Review Weekly. Did the childhood ridicule spur him on to achieve great things fast? No, but his parents’ environmental beliefs played a big part in shaping Wall’s psyche.

“My dad had a house with a wind turbine and solar panels, way ahead of its time in the 1970s, and my parents taught me never to live beyond my means. I suppose sustainability is in my blood.” Wall doesn’t drive a car and is a vegetarian. His carbon footprint is lower than most simply because he doesn’t eat meat. However, in 2004, when Wall was presented with the Prime Minister’s Environmentalist of the Year award by the Australian premier John Howard, newspapers screamed “turncoat”. One journalist described accepting an honour from a man who had refused to sign the Kyoto Protocol as “like taking a humanitarian award from Pol Pot”.

“I did have my misgivings,” says Wall, “but, after talking it through with close friends, I saw the award as a way of publicising and furthering the environmental cause.”

Like all great revolutionaries, Wall sees beyond the immediate furore to the greater goal. However, as is the wont of those in power, he has a single-minded streak. In 2002, he co-founded the Green Building Council of Australia (GBCA). Wall readily admits that his tireless work for the council, and later as founding chairman of the World Green Building Council, has been “about getting around government inaction and forwarding my own sustainable agenda to create a market for people who wanted to do the right thing”.

The GBCA introduced Green Star, an environmental building accreditation scheme that is a hybrid of BREEAM and LEED (Leadership in Energy and Environmental Design). It has had a massive influence, penetrating 70% of the commercial property market in Australia in just four years. Wall believes there are two reasons for its success. First, Green Star was developed to work for industry: it has the technical rigour of BREEAM in the UK enhanced with an element of commercial astuteness from the US scheme, LEED. “Sustainability and commerce must work together,” Wall says. “If they don’t, sustainability will lose out.”

Green Star has developed further than its UK and US forebears, morphing from a design tool into an accreditation that offers ratings not only for architectural designs but also built projects, existing buildings and management efficiency. “It can get a little confusing at times,” Wall says, “but the market is maturing fast and clamouring to have buildings judged on their environmental performance.”

The second important factor that is driving green accreditation in Australia is the competitive nature that seems to be built into every citizen. Wall bemoans the UK’s legislative big stick approach and likens Green Star’s success to that of the country’s sports teams. “Aussies aren’t just competitive when it comes to beating the Brits,” he laughs. “It starts at local and state level. So, if Victoria announces a new green initiative, New South Wales wants to go one better, and the idea snowballs. Both the states and developers are driving forward the initiative in an effort to outdo their rivals.”

This thirst for success also courses through Wall’s veins, although his self-deprecating nature doesn’t give it away. He began as a mechanical engineer at YRM after being educated to ONC level on day release at Vauxhall and Croydon colleges in south London. He describes himself as a “failed engineer who admires the linear thinking required to excel at the discipline”, and mocks the “open-minded attitude” that has brought him so far.

Wall moved to Australia in 1993, where he first specialised in energy modelling and conceptual design with Lincolne Scott. That same year Sydney won the bid to host the 2000 Olympics, making him well positioned to promote environmental design. In 1999 Lincolne Scott gave him managerial and financial control of his own division, Advanced Environmental Concepts (AEC), telling him to prove that there was a real market for sustainable building design.

Work soon poured in and Lincolne Scott realised that the ethics of this “boutique” division had to be at the core of its activities if the company was to grow. In 2001, Wall was appointed group director, giving him the chance to develop green skills across the business and take the company carbon neutral. “Over five years we promoted the green ethic throughout our offices; recycling, using less water, encouraging cycling to work, all the usual things. Then, when I looked into offsetting our remaining emissions, I was surprised at the relative low cost.”

Lincolne Scott spends the equivalent of only £18,000 a year to offset emissions from offices in five countries. It pioneered Australia’s first voluntary salary sacrifice scheme, allowing staff to offset personal emissions via payments from their pre-tax wage packets. “People don’t realise that carbon is cheap. When they do become involved, most are very willing to give a little back,” he says.

And what is the payback for the firm? “Two of the biggest challenges in our industry are sustainability and skills shortages. Get the first right and you solve the second. The greening of our business has attracted staff and retained them: people like working for something they believe in.”

Lincolne Scott was acquired by WSP last summer, bringing benefits for both sides. Lincolne Scott wanted to spread its wings in the US and Europe while WSP gained some of the world’s best environmental engineers. A team from AEC has already moved into the San Francisco office of another WSP subsidiary, Flack & Kurtz, and London is possibly the next port of call.

Spreading the green revolution worldwide must be on Wall’s mind. But his primary concerns are more with keeping sustainability on a local level. While global leaders meet to discuss international solutions and the new Australian prime minister, Kevin Rudd, gets the Kyoto message, Wall sees difficulties in looking for the big answer. “Every country has its own problems and challenges when it comes to the environment, and each must put in place measures to tackle them.

“Global companies would favour a single method of accrediting their property portfolios but we can’t impose LEED, Green Star or any other method worldwide. Maybe there will have to be a global brand or heading under which schemes operate eventually, but the key to global green design is localisation. I’ve worked with the Chinese ministry of construction, the Mexican and Indian green building councils, and each area requires different solutions tailored to specific needs.”

Since starting his career, Wall has pursued the environmental goals his parents instilled in him but inevitably has been drawn into the heart of the capitalist beast. “I don’t think my parents envisaged me in a suit, working for a big firm; more standing on the outside throwing rocks. But I’m doing things in a different way and I’m comfortable with my role. I’m very lucky that my work sits nicely with my personal aspirations and beliefs. And I’ve started to get used to the name now, too.”

Ché Wall will be speaking at the Think08 event. For more information go to the Think website