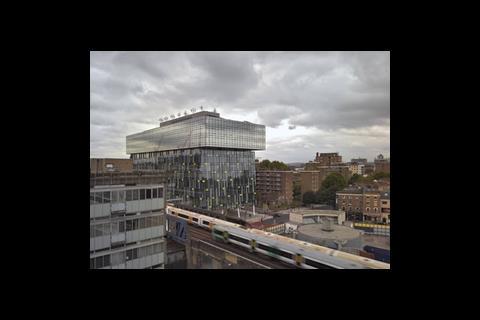 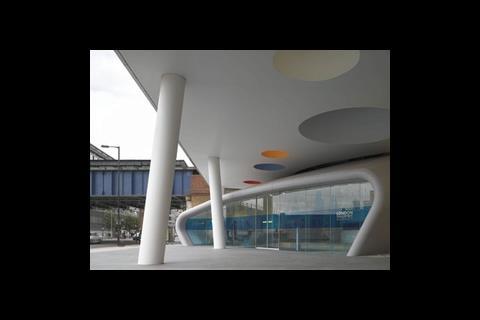 The London Development Agency has its own distinctive “pod” entrance. 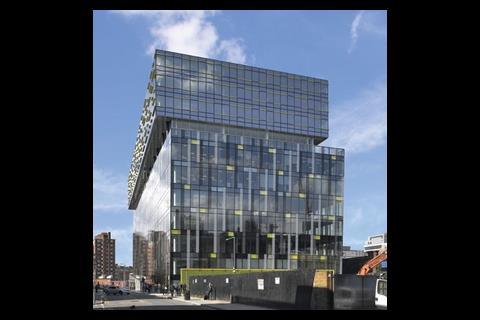 The facade of the Alsop-designed building incorporates vivid colour panels and a mix of frits on the glazing. Yellow fins decorate the three-storey top box 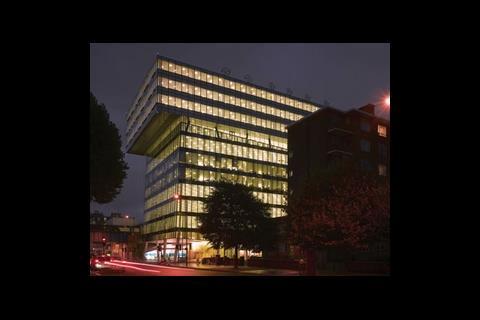 With its surreal leaning walls and speckled façade, the latest addition to the London skyline is surprisingly offbeat for a piece of speculative development. Stephen Kennett goes through the keyhole of the Palestra building

Grey metal and glass might be the stock-in-trade for most speculative developers of office space, but south of the Thames along Blackfriars Road one set of developers is bucking the trend. Unlike the sombre structures found closer to the City, the Palestra building makes itself known with raking columns, leaning walls, dramatically cantilevered upper floors and a façade that is speckled with colour.

It’s the work of SMC Alsop but, despite its outward appearance, this is every inch the speculative development. It boasts a 37,000 m² gross floor area, (28,000 m² net) spread over 12 occupied floors, with the second through to sixth storeys offering identical, large floor plates of about 3000 m². On the seventh floor, the building changes shape with the introduction of a terrace around two sides, offering views toward the Thames and St Paul’s. Finally, there is the building’s distinctive, shiny three-storey “top box” that cantilevers dramatically out over Blackfriars Road.

The finished façade, with its rectangles of bright yellow, silver and grey, is a toned-down version of Alsop’s original vision, admits Peter Thompson, associate director of Buro Happold’s façade division. “The initial concept was to use a lot of vivid colour but it was reigned in visually to make it slightly less outlandish; a bit more acceptable for the speculative office market,” he says.

He describes the façade’s development as a mix of art project and technical exercise. “We were given the architectural graphic images and then tried to match that to materials before going back to Alsop to see if it suited what they had in mind. It was a very iterative process, drawn out over many months,” he explains.

At the same time as getting the aesthetics right, Thompson had to ensure that the façade would perform to the acoustic and Part L requirements. Although planning permission was given in 1999, the project didn’t get going in earnest for a number of years as financial backing was sought. This meant the design was assessed under the 2002 Part L.

The first problem was to decide how to reconcile the need for a reasonable number of solid panels with high insulation, necessary to meet Part L2, with the complex arrangement of colours desired by the architects.

Dozens of solutions were explored for achieving this, says Thompson (see above "considered options for the facade").

One involved body-tinted glass in front of coloured aluminium mesh for the glazed areas, combined with a similar mesh in front of insulated spandrel panels for non-vision areas. This was rejected for making the glass too difficult to access for cleaning. Another solution used full-height body-tinted glass for the vision glazing, with separate glazed lookalike insulated spandrel panels. This required an external joint between the panels at the junction of the colours, which aesthetically wasn’t acceptable.

Eventually, it was proposed to incorporate a double glazed flush wall with spandrel panels and vision panels. This might sound conventional but it was made far more complex by the use of four types of frit on the vision panels and four kinds of shadow boxes – these provide the appearance of depth and colour and comprise clear glass in the front of an air gap backed by a coloured metal panel – dark grey, silver, yellow and mirror-finished stainless steel.

“When we had figured out the overall concept, the whole thing went back to Alsop to work on the pattern he wanted artistically of colours and frits and spandrel panels,” says Thompson. “Only when this was finalised could we move into the manufacturing stage.”

The façade system was custom made by Permasteelisa, based on one of its standard products. The base glass used has a 54% solar transmittance and 27% solar gain, while additional control of solar gain and glare relies on the fritting and coatings on the glass.

Getting the fritting right required some experimentation. Alsop wanted different colours visible on each side of the glass. The frit is a fired-on ceramic, so it meant the two different coloured solutions, one over the other, had to be applied to the same surface and exactly aligned using the silk-screen printing process. “Normally, a dotted pattern is used, but it was very difficult to align the two colour screens, so the pattern was changed to a linear one,” says Thompson.

The other consideration was colour. The frit is not opaque, which means one colour can influence the appearance of another, and various trials were carried out to find combinations that worked well together.

The only exception to the type of glass used for the main facades was the top box where Alsop wanted to contrast with the rest of the building by creating a highly reflective, mirror finish. Here, the glass has a 43% solar transmittance, while waist-high spandrel panels wrap around the elevations in bands, which only become visible when the office lighting comes on at night.

The other problem facing the design team was acoustics. Flanking the site on its northern edge is the railway line running into Charing Cross, while on its eastern side is the route into Blackfriars. In the main, the acoustics are tackled using a special laminate film on the inner leaf. This was the most cost-effective solution but, on the north and east elevations this was still not enough. Here, a thicker, laminated inner leaf is used to provide additional mass. This has the added benefit that, with two panes of dissimilar thickness, there is a further gain in performance because the resonance that occurs with similar pane thicknesses is avoided.

Façade units were delivered to site on a just-in-time basis to compensate for the restricted access created by the site being hemmed in by the railway and Blackfriars Road. With the high combination of glass options, frit patterns, colours and shadow boxes, each unit was tagged with a barcode as it ran off the production line so it could be identified on site and craned into the correct position on the building.

Behind the building’s intricate skin, Palestra adopts a more conventional design for the services, in keeping with the speculative market.

The brief from project manager CB Richard Ellis set the small power load target at 30 W/m2 with a lighting load of 15 W/m2. After some debate, four pipe fan coils won out over chilled beams. “One of our drivers was the client’s views of what the market wanted, says Pirooz Kani, associate with Buro Happold. “The other was the integration of the structure and services zone, which suited the fan coil solution.”

These zones are shared to rationalise on space. Services are threaded through holes in the 750 mm-deep structural beams to feed the fan coil units mounted between them with a false ceiling sitting just clear of the base of the beam.

The fan coil units are set out to enable the floors to be sensibly zoned. “The client was quite appreciative of the market, and wanted the most flexible approach to dividing up the floor plates,” says Kani. “It’s been designed for up to four tenants per floor, and each can have their own metered chilled water and LTHW, and their own distribution board.”

Tenancy lines are clearly defined and the FCUs are set out to comply with this. In addition, around the perimeter the units are offset from the building’s grid to provide room for additional fan coils to be installed if tenants want to create cellular offices, allowing the original units to remain in place.

The building follows a top-down servicing strategy for the air, chilled water and LTHW services. Rooftop plant rooms house two AHUs, each supplying up to 19 m3/s, along with seven 535 kW air-cooled chillers and a packaged boiler plant room containing four gas-fired boilers. These feed down into the building’s three main cores for distribution out onto each floor. Much of this was carried out using prefabricated multiservice units from M&E contractor Skanska Rashleigh Weatherfoil’s base in Slough.

Constant volume boxes deal with supply and extract air for the four quarters of each floor plate, with air delivered to the back of the FCUs at 18ºC for a room design temperature of 22ºC.

Despite any reservations the agents might have had about the marketability of the original design, the finished building proved itself by being fully pre-let before completion. Transport for London is taking more than 20,000 m2 of space, with the London Development Agency and the London Climate Change Agency taking the remainder of the floors.

Although the bespoke design, with its combination of glazing systems and fritted glass panels in several colours interspersed with various coloured shadow boxes, is more decorative than the cladding seen on many other speculative developments, the desired effect has been achieved, via a design and build route.

“It’s a distinctive building despite being a speculative development,” says Kani. “And yet it has already been let, so it was clearly attractive to the marketplace.”

Since its completion, the roof of the Palestra building has sprouted 14 micro wind turbines, along with an expanse of photovoltaic panels.

This wasn’t part of the original design brief. Their appearance coincided with the arrival of the London Climate Change Agency, responsible for tackling London’s CO2 emissions. Along with the London Development Agency, it has taken up residence in the building.

The LCCA claims this is the first combined photovoltaic and wind turbine system on an office building in central London and commissioned it as part of the fit out of its floors as a “living example” of how organisations can become more sustainable in their energy use.

Planning permission for the £436,000 project, which is supported by an Energy Saving Trust grant of £155,276 under the DTI Major Photovoltaic Demonstration Programme, was given in August this year and included the installation of 63 kW of photovoltaic panels and 21 kW of wind turbines. The LCCA claims the combined system will supply 4% of the electrical demand of the floors it occupies with the LDA.

The photovoltaics have a predicted lifespan of 60 years, the wind turbines 25 years, and over their lifetimes the combined generation is expected to average out at 3,397 MWh of renewable electricity. This represents a reduction in CO2 emissions of 3,300 tonnes.

According to Allan Jones, chief executive of the LCCA, “A feasibility study for a fuel cell trigeneration system is also underway which, with the renewable energy, would supply all the electricity, heating and cooling needs of these floors.”

The Palestra building is one of a series of such projects that the LCCA is undertaking; the first was the installation of photovoltaic panels at the London Transport museum. A planning application has also been submitted to Southwark Council to install a photovoltaic roof and solar shading at City Hall.