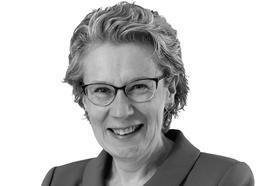 The end of the year is always the time we look back at what we have achieved and make resolutions about what we want to achieve for the year ahead. Taking a stock-take of 2018, a few figures stood out for me.

January gave us Building’s survey on women in construction – with the alarming statistics that 56% of female respondents had experienced sexual harassment and 33% been discriminated against on the grounds of sex in the previous 12 months. The gender pay gap report in April confirmed what we already knew: that most women in the industry work in low-paid roles, and the number of women working in most parts of the industry (architecture being the notable exception) has barely changed in the 40 years since the Sex Discrimination Act was passed.

May brought Dame Judith Hackitt’s independent review of building regulations and fire safety – shining a light on practices “which discourage ownership and accountability for decisions”. And in August, we learned that low-skilled male construction workers are almost four times more likely to take their own lives than the national average, with the number of suicides in construction now six times higher than deaths caused by falls from height.

And in this final month of the year, we hear main contractors saying it is difficult to even make 2% profit.

This is a brutal, dog-eat-dog culture where people are rewarded for ‘beating down’ suppliers and where offensive behaviour is tolerated

I can’t be the only one who sees these not as a series of problems for our industry to solve but as different manifestations of the same issue: this is a brutal, dog-eat-dog culture where people are rewarded for “beating down” suppliers, where displaying initiative or responsibility outside narrowly defined silos is actively discouraged – “because of the liability risk” – and where offensive, sometimes illegal behaviour is tolerated daily, so as not to “rock the boat”.

Given that almost one in five men in the UK workforce are in the construction or construction products industry it seems unlikely young girls or other under-represented groups really don’t know anything about it. Perhaps they know too much – and are exercising choices to work in other industries. Why is it a surprise that someone would rather work as a beautician with customers who know their name and appreciate their skills rather than as a tier-four supplier on a building site? Or would rather work as a computer games designer – pushing the boundaries of digital technology – rather than as a building professional?

Of course, there are some shining examples where clients and individual businesses are making a real difference: Building’s recent Good Employer Guide showed how seriously equality, diversion and inclusion, mental health, skills development and behaviour are being taken by many companies – including my own, Rider Levett Bucknall. Sadly, this is not mainstream and is often not valued by paymasters or the wider public. Even game-changing projects are easily tarnished: Heathrow Terminal 5 will be remembered by many as the one where the baggage handling system didn’t work for a couple of weeks, and Crossrail’s best practice in training, innovation and procurement risks being lost amid recriminations in the final project stages.

So, what’s to be done? The 1870s saw the end of children being sent up chimneys, in the 1920s (all) women got the vote, and by 1970 it was becoming unacceptable to drink and drive. All these changes were driven by a combination of public outrage and political impetus. Surely in the 2020s we can evoke something similar to change our industry? We have just seen government put £172m behind the joint industry/government Transforming Construction Challenge Fund, as a first stage in delivering the construction sector deal – which will encourage industry and government to work in partnership. Gender pay and payment performance reporting give us the tools to track real trends in the industry – and take action accordingly, while the implementation of the Hackitt review recommendations will reinforce accountability across the industry. Beyond this government action there is a sound body of initiatives that are providing a toolkit for change, including the Infrastructure and Projects Authority’s Transforming Infrastructure Performance, Build UK’s PQ reform, the Infrastructure Client Group’s Project 13, trial projects using integrated project insurance, the CLC’s Procuring for Value, and a new generation of collaborative framework and alliance contracts.

And it’s not all bad news. Profits and pay are rising in many areas, including housebuilders, infrastructure contractors and consultants. We have close to zero unemployment in the construction sector and apprenticeship numbers are finally beginning to rise.

I look to the new year with optimism for construction: we are flexible and resilient and are on the cusp of change. Of course, a lot depends on the delayed parliamentary Brexit-deal vote, whenever that happens – here’s hoping that my optimism isn’t too short-lived.