Half-term hols will come as a relief after the excitement of Tim Byles leaving, the education secretary displaying an appalling lack of handwriting skill and a sports day-style event that ended in tears …

“Bye bye, Byles”. That headline alone will please one of my contacts at Bam Construct, who had a small bet (proceeds to charity, of course) with a colleague that, following Tim Byles’ exit from Partnerships for Schools, someone, somewhere, would use the phrase to announce his departure. The news has certainly set gossip running across the sector, with Ty Goddard, director of the BCSE, contemplating, in an article in the Times, whether the departure was “an undignified exit.” This has been angrily refuted by supporters of the outgoing chief executive, one of whom questioned whether making such comments was itself “the most dignified behaviour.” Play nicely now, lads …

Chris Huhne’s mind may not have been entirely focused on the launch of RIBA’s competition to find a new design for Britain’s electricity pylons this week. We can only assume that the secretary of state, who is currently battling allegations from his ex-wife that he asked her to take his speeding points, was not contemplating a power cut as he sat next to a model of one of the ubiquitous structures. Still, he managed to summon a remarkable amount of interest in pylons, as the panel considered whether they should be shaped like people, as is the case in Finland. What about replicas of Anish Kapoor’s Orbit criss-crossing our landscape? You could make a few mistakes and nobody would notice …

The locals of Mawsley Village in Kettering are not happy with Taylor Wimpey and the town it built. According to them, the roads are in a shocking state. Even back in 2009 local MP Philip Hollobone blasted in parliament “the main developer, Taylor Wimpey, [who] has been slow and reluctant in dealing with basic maintenance issues such as street lighting, road potholes and unfinished pavement surfaces.” They now have a petition demanding Taylor Wimpey fix the roads. The perils of localism.

How not to get a promotion

Pete Redfern, meanwhile, has been walking along even tougher terrain than the roads in Mawsley - his Taylor Wimpey team managed to finish sixth out
of 42 in the annual Three Peaks Challenge, where hikers race each other up and down the heights of Ben Nevis, Snowdon, and Scafell Pike. A good result, but rather embarrassingly for the chief exec, he was beaten by Taylor Wimpey’s South-west Thames office by just three minutes. Do they not understand about letting the boss win?

As Lord Sugar pushes this year’s hapless Apprentice contenders through various chaotic tasks it’s easy to see why he didn’t fancy taking this year’s winner on to his payroll - he will instead stump up £250k start-up cash. Some of the previous winners found their way into his real estate business, Amsprop, putting them into direct contact with construction firms. So what do they make of them? One supplier told one of my hacks: “I’ve worked with a couple of them but I can’t remembertheir names.” Hardly a ringing endorsement of a contest that supposedly finds business greats.

One person who was keen to assure the sector that Byles’ departure was not the result of any ill-will was education secretary Michael Gove, who released an effusive letter praising the PfS chief’s “longstanding and passionate commitment” and “excellent” work at PfS. The missive even had a handwritten note attached to the bottom, in which Gove said he “looked forward very much to staying in touch, professionally and personally.” At least, that’s what I think he said. Rather worryingly, the education secretary appears to have missed the lessons on handwriting, with no attempt made to join up his letters or, indeed, shape many of them. He also looks to have initially misspelled “venture” as “wenture”. Could definitely do better …. 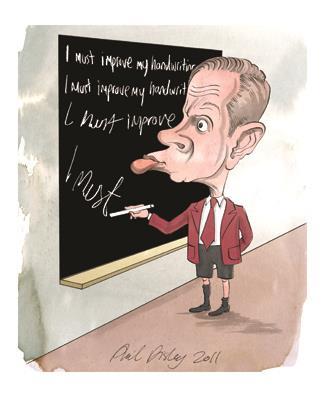