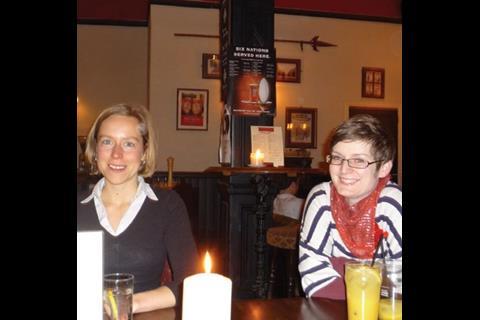 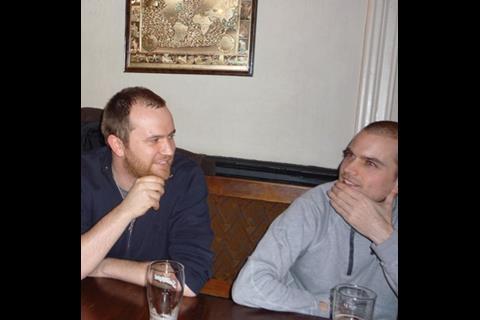 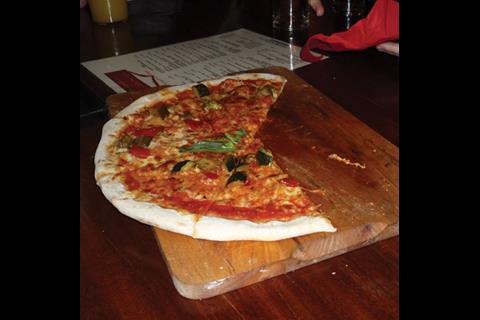 When I arrive at the curiously named George and Vulture off Old Street, the team from Davy Smith Architects are clustered around a baby grand piano

Is this to be an evening of faux-East-End community singing? Thankfully, no. My fears are allayed when it turns out nobody from the firm can play anything more than Chopsticks – well not when sober, and it’s still only 6.30pm.

It turns out getting everyone out at short notice wasn’t too hard as Hugh has just got news that he’s passed his part III. He’s now a fully fledged architect. Does that mean a pay rise is on the cards? Peter looks a bit shifty at this suggestion. “It means I can charge a higher rate for him at least,” he says, without actually answering the question.

'Did you ever use that as a chat-up line?' asks Kornelia in disbelief

Hugh consoles himself, however, that it’ll make a much better chat up line than calling himself an architectural assistant. “Did you ever use that as a chat-up line?” asks Kornelia in disbelief. After briefly comparing the pulling power of occupations we get onto the subject of what films have had architects as the main characters. I imagine the topic won’t last long.

Peter comes up with Charles Bronson in Death Wish and Paul Newman in The Towering Inferno. Rebecca chips in with Woody Harrelson’s Indecent Proposal and Intersection with Sharon Stone and Richard Gere, which everyone agrees is terrible and should not be discussed further. Guin, it turns out, is something of a film buff and comes up with River Wild, The Fountainhead, My Architect and Breaking and Entering, although Jude Law plays a landscape architect in that one.

We get onto the real cultural delights, though, when Anni suggests Tom Selleck in Three Men and a Baby. “And Three Men and a Little Lady,” adds Mark. Hugh suggests There’s Something About Mary although strictly speaking Ben Stiller was only pretending to be an architect to get a date with Cameron Diaz. Are there any films about QSs, wonders Mark? We’re all stumped.

Apparently, Peter has seen some of his designs appear on television. There was one where someone was being chased into the flat, he recalls. “I recognised the inside of the flat but then they crawled out of the bathroom window onto a flat roof. There definitely wasn’t a flat roof on the building we designed,” he says. Another featured in the background of a Cup-a-Soup advert.

At this point the pub quiz begins and we get thoroughly distracted. Which country is flanked by 16 others? None of us knows, despite flicking through the tiny maps in Anni’s diary, nor do we have any idea which species only gives birth to twins. But our combined knowledge of obscure seventies’ music, artists and other fascinating trivia helps us to victory. Oh, and in case you’re wondering it’s China. And the animal? Answers on a postcard...