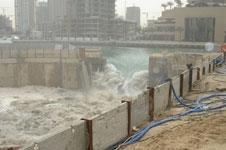 Resolving construction disputes in Dubai can be complex, but dispute resolution boards can help prevent such wrangles arising in the first place

Most construction contracts used in Dubai are based on the FIDIC standard form. They invariably include an obligation to seek to settle disputes amicably before the commencement of arbitration. Although no definitive procedure is prescribed, “amicable settlement” will often include meetings between senior representatives of the parties in a final attempt to settle.

Other methods could conceivably include mediation, neutral evaluation, conciliation or expert determination. Although some of the more sophisticated dispute clauses introduced into bespoke construction contracts have tried to incorporate such formalised ADR processes, these techniques are not as familiar as in other jurisdictions and are not generally embraced by the Dubai construction industry. Furthermore, as with even the recognised forums in Dubai, the ability to enforce the resulting decision or recommendation is not specifically catered for within the legal framework.

Unlike the UK, there is no statutory adjudication process. However, although the “engineer’s decision” was once the norm, recent FIDIC contracts have adopted the use of dispute adjudication boards (DABs) .

The FIDIC 1999 contracts offer two ways of using DABs: either by appointing a “full-term” board that is established from the outset of the project or by appointing an “ad hoc DAB” if a dispute arises.

The aim of the DAB is to use the experience and acquired knowledge of the panel members, who are appointed from the start of the project, to help to prevent full blown disputes ever arising. The panel visits the site at intervals of not more than 140 days, including times of critical construction events, or at the request of either party. At the conclusion of each visit, and before leaving the site, the DAB must prepare a report on its activities and the issues encountered. In this way, contentious issues are considered as and when they arise. That, in turn, should allow work to continue, and the often frenetic pace of Dubai’s projects to be maintained.

The early involvement of the DAB is the real strength of a full-term board and makes it less likely that a formal dispute will develop. If a resolution cannot be found then either party may refer the matter in writing to the DAB for its decision. Importantly, the parties must comply with that decision unless and until it is revised by arbitration.

Unfortunately, the adoption of DABs (particularly the full-term ones) is the exception rather than the rule. Parties are often reluctant to incur the additional costs that are required to fund a full-term DAB in the mistaken belief that their project will be the one that remains trouble free.

In many instances, this is not the case and large costs are incurred in seeking to resolve formal disputes after the event when they could have been resolved at site level when they first arose.

Prospects for the future

Arbitration remains the most commonly used forum for dispute resolution. The local courts are neither specialist enough, nor sophisticated enough, to deal with high-value, technical construction disputes.

If adjudication (or any other alternative dispute resolution technique such as mediation) is to provide an effective alternative to this, then the DAB process must be adopted and embraced by Dubai’s government and its construction industry. This is already the case in Abu Dhabi’s government contracts.

The DAB process requires respected adjudicators to issue decisions that gain the confidence of the industry, thus meaning that costly and time-consuming arbitration proceedings are avoided. An end to the reluctance to appoint full-term DABs is also required.

Most importantly, the local courts must be seen to enforce the decisions of adjudicators and arbitrators. For those international and local companies involved in Dubai’s tremendous construction boom, the processes of resolving their disputes in the way that the construction industry prefers to resolve them must be fully available and supported by the legal system and laws of this rapidly developing emirate.

Paul Taylor is a partner, and Anthony Page, is a solicitor, in the Dubai Office of HBJ Gateley Wareing