Fair payment: Get some ZZZs

Fair payment. It’s what we all want, isn’t it? The government is backing payment promises, coming soon to a contract near you

Some say the “Z” clause in the NEC3 contract document has an awful reputation. It is an invitation for mischief. It’s where extra laughs and giggles get weaved into the so-called “agreed” contract. Without the “Z” bits, the document is fairly even-handed. But when one party - invariably the payer - wants to lump greater risk onto the outfit who does the work, he dreams up all sorts of clever wheezes; he dreams up “Z” clauses.

It’s all very well to mutter about the guide. Aspirations come cheap, thick and fast from these types of departments. Well, blow me down, they have put their money where their mouth is

But, wait, one of the government folk has suddenly seen the light. The Cabinet Office has on its website, next to a picture of Mr Clegg, a headline claiming it wants NEC “Z” clauses to be fair. Or rather, it insists that the “Z” clause in NEC3 will shout “fair payment” for main contractors. Oh, I nearly overlooked it - it whispers: “Fair payment for subbies too.” Not to put too fine a point on it, you will do something special with the “Z” clause.

Just go back in time a short while. In September 2009, an arm of government called the Construction Clients Board decided to make a contractual requirement to adopt the fair payment provisions published in the guide to best fair payment practices. Well, it’s all very well to mutter about the guide. Aspirations come cheap, thick and fast from these types of departments. Well, blow me down, they have put their money where their mouth is. Here is what you public procurement folk shall write:

No, no this is not pay when paid. It is a promise to pay whether or not there is a hiccup or dispute upstream 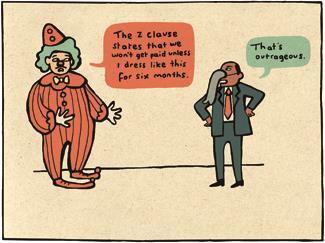