The lure of celebrity proves too much to resist as industry members rub shoulders with Strictly contestants, reveal their own love of performing and start morphing into famous figures themselves

The crowd at the launch of Candy & Candy’s new interior design book, The Art of Design, was more celebrity than property last week. Held at Mayfair’s Halcyon Gallery, the event was swarming with the Strictly Come Dancing contingent. Nick Candy’s girlfriend and Strictly contestant Holly Valance was busy holding court alongside her man, posing for photos - not only promoting the book but dispelling rumours of a romance with her dance partner Artem, who also attended. Other celebs spotted included Lulu, Nancy Dell’Olio, David Walliams and a clutch of professional Strictly dancers. Also at the event was Zaha Hadid, one of the few high profile names there who was not also appearing on Strictly. This time, that is. Hadid told Building earlier this year that she missed dancing. You never know what 2012 might hold …

At the same event, there was a strange phenomenon to behold - trays and trays full of canapes. This may sound pretty standard. But at a construction event, the trays are, more often than not, pretty much empty as soon as the waiters have walked through the door. Not at this party. While the champagne servers were mobbed all night, trays of mozzarella and aubergine mousse and lamb kofta bites were circulating continually - often doing two or three laps of the venue. In a gallery full of dancers, models and socialites, in seemed that no matter how small the pieces of food on offer, nobody wanted to risk any additional calorie intake. On the plus side, it made it easier to spot the construction guests - they were the ones trying to rectify the canape surplus situation by eating as much as they could within the time restraints of the event and looking as though all their Christmases had come at once.

Star of the show

Blane Judd, chief executive of the Heating and Ventilating Contractors’ Association (HVCA), may have spent the bulk of his career in electrical engineering and various management positions - but it could have been so different. Between the ages of four and 11, Judd appeared in no fewer than 32 television commercials as his parents attempted to set him on a path towards an acting career. Judd recalls he also appeared on the front of the Space Hopper box. Very different to his current role, you might think? Not entirely. He says heading up the HVCA still goes some way to sating his love of performing.

Visiting the Olympic park to view the tangle of guts known as the ArcelorMittal Orbit sculpture, Hansom became concerned about the issue of paint. Given that the twisting steel tube 2,000-tonne structure is (almost) completely painted red, is there a danger that it could become the modern day equivalent of the Forth Bridge by requiring almost constant new coats? Reassuringly, that shouldn’t become an issue until 2040 at the earliest, given that the paint boasts a 30-year guarantee. I’m also told that designer Anish Kapoor was so determined
to get the right shade he changed his mind at the last minute - opting for a slightly darker hue. Asked why it is red at all, Kapoor is said to reply enigmatically “because it is red”.

Building’s front cover in the wake of the Arcadis/EC Harris merger raised a few eyebrows around Building Towers. Since when, my colleagues asked, had Hollywood actor Donald Sutherland been in charge of the £1.3bn-turnover Dutch consultant? It looked like the Don’t Look Now and Invasion of the Body Snatchers star had been sitting in for Arcadis chief executive Harrie Noy. Is there something spooky afoot with this deal? Building would like to know. 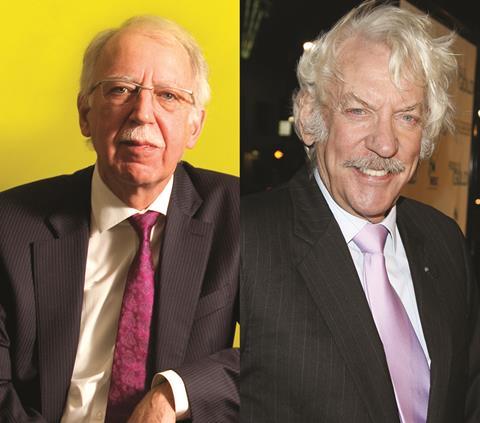