Hansom: is it safe?

You might as well stay indoors this week – it’s a dangerous world out there: London cyclists are doomed, pirates on jet-skis are moving in and international conspiracies abound

Ellie Reed, director of recruitment firm A&E construction and the industry’s representative on The Apprentice, has so far managed to fly below the radar and avoid Sir Alan’s finger on the first two episodes of the new series. But perhaps Sugar should do a little delving at Companies House. Reed’s firm has undergone some dramatic “downsizing” in the past year, reporting net assets of £130,527 in the year to 31 March 2009, but just £57,577 last year. Clearly A&E is such an “managable” size Reed is able to devote time to other matters. Where are Nick and Margaret when you need them?

I would never deign to cycle the streets of London, as, apart from the dirt and sweat that tends to accumulate, the risk of getting hurt is undeniable. Others appear to agree with me - but not quite who you’d think. When Capita decided whether or not to take on a contract for Transport for London, which included supporting the Boris Bike scheme, I hear that the decision went all the way up to the firm’s main board, because cycling in London was seen as a health and safety risk. Given how many keen cyclists there are in the Capita Symonds offices, it would have been a little odd if their parent company hadn’t given them the green light.

The folk at Proctor Street are also grappling with an even more extreme form of transport in Nigeria as they attempt to design a shorefront “pirate proof” residence for a certain client of Capita Symonds, operating along the coast near Lagos. Apparently the buckaneers can arrive not only in boats, but jet-skis as well, so high walls might be essential. Can I suggest they remove any ramps in the immediate vicinity as well? We have all seen enough action films to predict how these might be used.

Anticipating how many people are going to attend your bash is a tricky business, if the event hosted last week by Galliford Try is anything to go by. Celebrating the completion of the Renaissance St Pancras hotel, the queue to get into the reception, which was held in the superbly named Hansom Hall, soon snaked back through the reception to the entrance. A second queue was quickly established but again this was back towards the entrance within minutes. The perils of popularity.

Plans by the UK Contractors’ Group to celebrate the career and achievements of Bovis’ John Spanswick were thrown into last minute disarray when the hotel booked for the event rang to say they could not accommodate them. The reason? Apparently they’d had the builders in and they had badly overrun. While an alternative was found a stone’s throw from the venue, several CEOs apparently found time to slip round the corner in the dark just to check they were not the company at fault. Happily for UKCG, nobody was embarrassed.

What does Costain boss Andrew Wyllie have in common with Peter Mandelson, Jeremy Paxman, and James Naughtie? They are all members of the British American Project (BAP), the transatlantic group of business people, politicians and journalists who attend an annual conference - strictly closed to outside hacks - which aims to foster the “special relationship”. Described as “casual freemasonry” by journalist John Pilger, it strikes me that if Wyllie is actually part of some sort of global neo-conservative conspiracy (he joined BAP in 2003), then he’s certainly not capitalising on it - Costain announced a £300m fall in its order book at the start of the month. 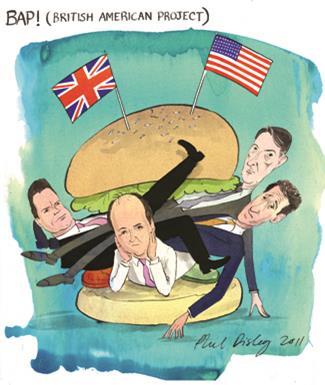