Hansom: Look over there!

Distractions abound in the industry this week, from executive toys in Rok’s offices, elusive bosses, misplacing a wind farm and a handy suggestion for the Irish government’s PR team

Show who the money?
Just who lost out when architects DEGW failed last year has so far remained a mystery. But several high-profile creditors have now emerged from the administrators’ reports. Paul Morrell, a non-executive director at the practice, was owed £26,390, and Penoyre & Prasad were also significant creditors to the tune of £38,167. There’s no suggestion they were the creditors in last week’s news story (page 12) who lobbied liquidators to look into the actions of the executive directors at the helm when the company failed, but nonetheless - ouch.

All play …
Remember Garvis Snook’s email to staff at collapsed contractor Rok (19 November, page 10)? The one where he told them to “keep on Roking”? Well, further evidence of the bizarre side of day-to-day life at the firm continues to emerge. One industry manager tells me that on a visit to one of the company’s northern offices, he had a bout of momentary confusion when he entered the reception area. “It was full of PlayStations, pool tables, football tables … and a clear fridge of Bud,” he recalls. “It may be alright if you’re Google or someone, but not a contractor.” Perhaps it was just Snook’s way of preparing employees at the doomed company for an alternative career in hustling.

… and no work
“Yes this is Rok - or what remains of it” was the black-humoured remark when Building phoned the skeleton staff at the Inverness office last week to check that Garvis’s astonishing final email wasn’t a fake. They knew of what we spoke. In fact, the offending missive had been printed out and pinned to the wall by soon-to-be-redundant staff - and not as a morale booster.

Quite the opposite. As soon as Rok staff saw the email, they knew it was real. How? According to one of the last remaining Rokers it was “delusional enough not to
be a hoax”. 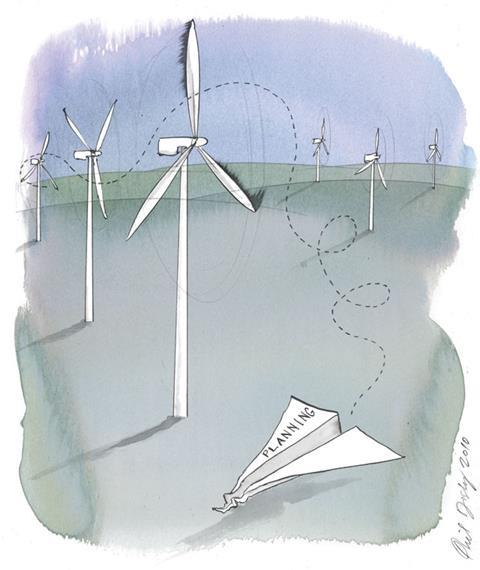 It’s hard – even at the best of times – to get local communities to let you build wind farms in their line of sight. But the planning process threw an entirely unfair obstacle in the path of David Hodkinson, head of development at Vattenfall Wind Power – by getting the coordinates of a proposed farm wrong. “They thought it was on the opposite side of the Pennines, in Cumbria,” he quite reasonably moaned. Once the correct location was revealed, the application sailed through. An even bigger worry to wind farmers than the localism agenda?

I McK’s busy week
Beleaguered fit-out firm Styles & Wood was curiously reluctant to shout about its rebranding as S&W last week. The company, which issued a turnover warning at the end of October despite boasting of a rush of orders to the City in August, seemed unable to summon its chief executive Ivan McKeever to talk about its “dynamic new website” and “new promotional literature”. Perhaps it takes several all-day meetings to take eight letters out of the company name …

Tweaking the figures
Did you hear the one about the Irish phone number? The country may have overextended itself, even when it comes to the phone book. Last week I called a contractor based in Dublin only to discover that rather than having a standard 11-digit number, this firm had not only managed to squeeze another digit in, but had somehow made sure it still worked.

If only the Irish government could work some similar magic - in reverse of course - on the country’s debt figure.