For once I get the chance to use the phrase ‘health and safety gone mad’ justly, gender pay gap figures bring up unsaid questions, Interserve’s chief exec races against time and Lego is once again the king of toys

Southwark council recently approved Dexter Moren’s 274-room hotel on The Cut, home to the thesp destinations the Old and Young Vic theatres. You’d think, given the building is seven storeys tall, that there would be little fear of flooding in the event that the Thames, which flows more than a quarter of a mile away, were to burst its banks. But the legally required health and safety regulation is firmly in place if the guests need to evacuate the premises. There’s just one snag. The hotel’s muster point is a 1.5 mile-long schlep to some street corner in not-so-neighbouring Walworth.

Not even time to say ‘cheese’

Interserve has ringed the last week of March for releasing its 2017 results. The firm normally releases its year-end totals in February but chief executive Debbie White had to delay these while she shored up the company’s finances. I wonder if it will be updating its press pics of White. “I don’t think she’s had time to do a photo shoot,” I’m told. “She’s been stuck with the banks every day.” No wonder she’s off on a two-week break.

Businesses of a certain size are all too aware of their new duties to report on gender pay differences, and my hacks tell me there is keen interest in not being seen to be worst-in-class. But despite publishing “disappointing” figures outlining a 23.4% average discrepancy between hourly rates for men and women, multidisciplinary firm Stride Treglown has insisted that its mix of engineers, planners, architects and surveyors are a tolerant and forgiving bunch. Company chairman David Hunter claimed staff had reacted positively to a prepublication consultation on the data, with the most common response being a “request for ongoing feedback”. Wouldn’t it be simpler and quicker to ask the firm’s female staff: “Would you like to be paid more money?”

A public petition to parliament calling for “an urgent public inquiry” into why Carillion continued to be awarded contracts by the government after last summer’s £845m profit warning is not gathering the head of steam its organisers must have hoped for. It is “vital any potential criminal activity is investigated and acted on”, the petition, which was launched on the day the firm went bust, thunders. The government will respond if there are 10,000 signatures within six months. But at the time of writing fewer than 400 have signed. I would have thought the firm’s 20,000 former UK employees might have been tempted to put pen to paper, not to mention all those owed money as a result of the debacle.

Has Zaha Hadid Architects’ press office been taking tips from politicians on how not to answer questions? Its building at Shad Thames has “unique planning conditions”, which the firm said “reduces the potential pool of tenants for the building [meaning] the site could remain empty for some time”. When my hack asked what the conditions were, he was told that the former Design Museum site holds the practice’s archive and late architect’s collection of works. An answer to an entirely different and unasked question! If companies are going to start acting like Boris Johnson on a particularly evasive day, I have instructed my journalist to use some Jeremy Paxman-style tactics and ask the same question again dozens of times. 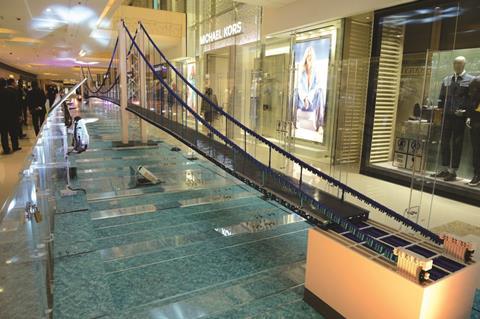 Aecom has shown its quirky side by helping to build the world’s longest span bridge made from Lego. It worked with the Institution of Civil Engineers in Hong Kong, developer MTR Corporation and Bright Bricks, a UK firm that specialises in building structures out of the toy brick. Displayed in a Hong Kong shopping centre, the impressive bridge is 33m long, its longest span stretches 16 metres and it weighs more than half a tonne – 250,000-plus bricks were used. Designer Robin Sham, Aecom’s global long span and specialty bridges director, said he hoped it would inspire Hong Kong youth “to positively impact the built environment”. That’s assuming said kids aren’t already preoccupied, like Hansom Jnr, with building a Lego Death Star …