Nul points all round this week as contractors fail to integrate as instructed, a government minister offends his audience and the McLaren racing team boss takes a pop at the Olympic venues

Contractors of a certain age were rather pleased by the NFB’s choice of former BBC news anchor Selina Scott as presenter of its annual conference. Scott managed to endear herself further to her audience by revealing - to the surprise of the assembled builders - that she was given a cement mixer for her birthday. “It’s bright orange, beautiful and I love it,” she enthused. The only downside, she said, was being pestered by “unwelcome gentleman callers” who had taken a liking to her beloved machine. Builders take note - however nicely you ask, Scott will not part with her mixer.

Is the strain of cajoling the UK’s notoriously fractious construction industry into working more closely together taking its toll on Paul Morrell? Two years into his role as the government’s chief construction adviser, Morrell has thrown any pretence at sweet-talking out of the window. Speaking at the NFB’s conference, he was unapologetic that the government would not police bad tendering practices by all local councils. He also raised a few laughs when he joked that he thought of subtitling his presentation: “Integrate you bastards”. I suggest: “Don’t mess with Morrell”.

How does a UK consultant go about navigating the headache-inducing complexity of the Middle Eastern market, with its various sheikhs, dynasties and minor royals? Nicholas Thompson, chief executive of architect Aukett Fitzroy Robinson, thinks he may have the answer. Rolled up in his desk is a poster detailing the entire Abu Dhabi royal family and what assets each member owns. When rolled out end to end the poster covers the entire width of Thompson’s office. It makes the Windsor royal family tree look positively modest.

Housing minister Grant Shapps was all abuzz on Twitter this week as he listed in 14 separate tweets his appearances on radio and TV to outline what the housing strategy meant to the wider public. However, the government’s willingness to expose itself to the scrutiny of the specialist press was somewhat less impressive. The launch of the housing strategy was not accompanied by any press conference at all, although assorted trade bodies got a Monday morning briefing by the civil servant in charge. While a brief phone conversation with junior minister Andrew Stunell was eventually offered, it seemed like those without a TV camera were very much in the second row. It’s almost as if they have something to hide?

As the Olympic park nears completion, I was surprised to learn that not everyone considers it to be a showpiece of UK creativity and design. Ron Dennis, executive chairman of Formula One racing team McLaren, has roundly lambasted the site for lacking “harmony and balance.” Might this be thinly-veiled revenge for the IOC’s refusal to accept F1 as an Olympic sport?

These last few weeks have not been easy for Tory energy minister Greg Barker, who has been operating under a cloud since he unveiled government plans to halve the subsidy for energy from solar panels on people’s homes. Things reached a new low earlier this month, it has emerged, when Barker was booed and jeered by an audience at a Friends of the Earth event, at which he was speaking. Barker chose the event to make the point that it was “not morally right” for people to make back huge sums from green energy in the age of austerity. Unsurprisingly, it didn’t go down too well with the audience of community groups, who aren’t exactly famous for their greedy pocket-lining antics. 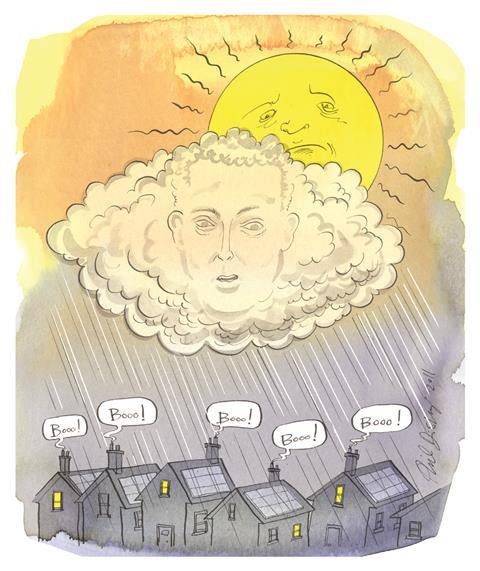