There are some unlikely combinations this week - a surveyor turns model, a virtual brick app, a car that runs on wine and construction managers with a penchant for ponies. Takes all sorts, you know

From surveyor to surveyed

Is there a life after consulting? Where can you go once you’ve turned your back on the loving embrace of the Royal Institute of Chartered Surveyors? One former senior partner at consultant Gardiner & Theobald has shelved his calculator to try his hand at … modelling. Former industry associates were startled to see retired G&T equity partner Norman Cannell on the Post Office’s website in an advertisement selling a home phone package earlier this year. Our informant also tells us a large photo of Cannell is on display at his local Post Office. I’m told his daughter-in-law works in advertising…

Taking us for a ride

It must be stressful working on the Shard - Europe’s tallest construction project. So how best to unwind? Well, if a press release from Mace Group is anything to go by, its construction managers down tools and saddle up at the nearest pony club. Mace has renewed its sponsorship for the annual “display event” at the Horse of the Year show. The display includes the Household Cavalry Musical Ride. What could explain Mace’s equestrian enthusiasm? Well, Mace’s business unit director Terry Spraggett has a daughter competing in one of the categories, it seems.

What every modern brickie needs

It had to happen one day. An enterprising architect from Bristol has come up with the ultimate in iPhone apps - the virtual brick app. Sadly it is this columnist’s view that an iPhone app of a brick is unlikely to be a match for an actual brick due to its inferior dimensions. Anyone who has cracked an Apple product will also know they lack the necessary tensile strength to make it as a building material. But if you’re an architect who needs to know the different types of bricks available, BrickitPro could well be for you …

A rally nice day out

Think of a rally car pit stop and you are unlikely to conjure up images of a neo-Georgian family house. But as we know, Prince Charles is a man who thinks differently and he has helped ensure that this month’s Bridgestone Eco Rally, sponsored by his sustainability charity START, stops off at another of his pet projects - the low-carbon Natural House.

Why, you may ask? Well, to provide the low emission vehicles taking part - which range from a hybrid double-decker bus to a Lotus sports car that runs on surplus wine or whey from cheese - with what PRs describe as a “high-tech eco-residential backdrop”.

And so it is that as well as visiting Oxford and the Mall in central London, the rally will take in the glorious sights of Watford en route to the nearby home of the Natural House, the BRE Innovation Park.

In a pickle up North

The first rule of public speaking is knowing your audience - a lesson communities minister Eric Pickles should know only too well. But sadly Pickles was found wanting in this regard at an event last week to launch south Yorkshire’s enterprise zone. The event on the outskirts of Rotherham was to celebrate the new zone, which will also incorporate the neighbouring city of Sheffield. But a source tells me Pickles spent much of the speech praising Rotherham’s bitter rival Sheffield, calling for a return of the marque Made in Sheffield. My source told me the Rotherham contingent were “seething”. 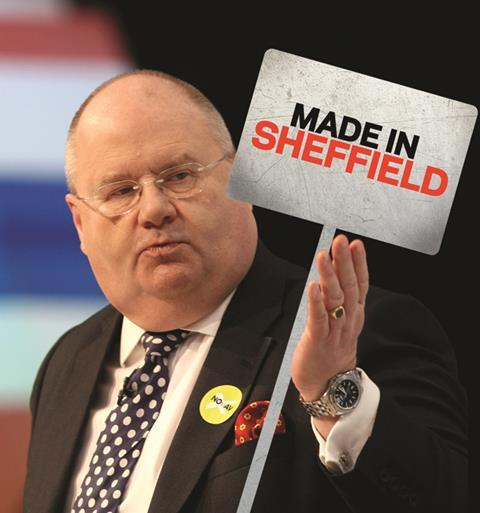