Whether you’re playing on your phone during a conference, making the best of a political crisis, stalking a stranger to their home or cycling to Manchester, this is a week for throwing caution to the wind

Presenting the prizes at the Considerate Constructors’ National Site Awards last week, the government’s chief construction adviser Paul Morrell was once again making quips about his well-insulated frame. Morrell is clearly a man comfortable in his own skin, so one wonders how he is getting on with his plan to practise what he preaches by losing 15-20% of his body weight over the life of this parliament. As a good QS, Morrell is no doubt using a robust calculation system to monitor the results of his efforts, such as the body mass index (BMI). Hansom’s current observation, however, is that he is more focused on BIM than BMI.

Get a (whole) life

I don’t know about you, but I for one cannot imagine tearing my attention away from a presentation on how to calculate whole-life carbon in buildings. It might be a bit techie, but it is consistently enthralling. So, I felt a twinge of disappointment when I glanced over the shoulder of one senior construction figure and saw he was playing solitaire on his phone at such an event. To make matters worse, it was while his own colleague gave an impassioned speech unveiling the results of their report.

Every cloud has a green lining

You can say a lot about the solar industry bods, but one thing’s for sure - they’re on the ball when it comes to social media marketing. While the rest of the country was furiously descending on petrol pumps in preparation for the fuel-ocolypse, a number in the solar and environmental lobby were seizing the spirit of the moment to retweet this little gem: “FRANCIS MAUDE. Do your bit for the environment by encouraging people to panic-buy solar panels.” Sadly, at the time of writing it looked more likely that Maude would be banned from speaking in public by prime minister David Cameron than a rush on Homebase would take place.

Running the London marathon is a tough challenge. So to do it wearing 6ft costumes that resemble the Big Ben, St Paul’s Cathedral and the Gherkin is a truly brave feat. Three cheers then to Trevor Dowd and Matt Clare of Trident Building Consultancy and Sam Sananes of UBS-CLOVA, who are planning to do just that on 22 April. The three are raising money for the charity KIDS, which helps disabled children and young people fulfil their potential while supporting their families. Sponsor Matt, Trevor and Sam at www.justgiving.com/ landmarks.

Why cycle to Cannes when you can peddle on home turf? It’s that time of year again - the British Council for Offices (BCO) conference. Sadly, UK delegates won’t bag an overseas trip out for the event this year, as it is being held in Manchester, but the up side is the revival of the BCO bike ride. James Pellatt, head of projects at Great Portland Estates, is leading the three-day ride on 21-23 May. Who wouldn’t welcome the chance to get some exercise in before the BCO onslaught? There are about 50 places left on the ride. Email bco@sasevents.co.uk. 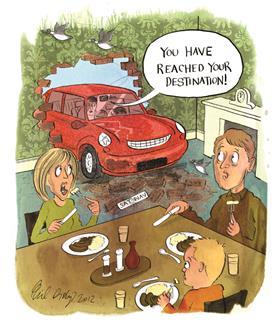 Navigation is tough at the best of times - particularly the morning after the night before, as one of my hacks recently discovered. I heard that a gallant contact offered to pick our journalist up en route to a conference. Unfortunately that was pretty much the last time “en route” was a fair definition of the journey, as they found themselves lost for the next two hours. The problem was, apparently, an inefficient sat-nav. Mind you, searching for a postal code as opposed to a “coastal pode” might have thrown up more useful directions. And following “that car” in case it is going to the same place only works when you are within a five-mile radius of the venue. If not, you might just end up tailing some poor soul back to their house, as our dynamic duo soon discovered.