The world at large is finally giving the construction industry the respect it deserves: Gleeds the musical, QSs making it onto the high street and the Sunday Telegraph basically trying to be Building

Isn’t it funny how little things change in the fast-moving world of architect Will Alsop? Little more than a month ago, Alsop and RMJM colleague Marcus Noble were busy setting up conference calls with the media to squash reports that he was about to jump ship. “I don’t have any plans to leave at all,” Alsop said then. “I am aware of these rumours - it is like rumours on rumours.” This week, RMJM announced he was leaving, after talks that chief executive Peter Morrison said had been going on for “some time”. The episode gives one a feeling of deja vu given the “new career in painting” Alsop announced two years ago when explaining his departure from Archial - before swiftly joining RMJM with no paintbrush in sight.

A bit of background

Any readers who have the pleasure of following government housing minister Grant Shapps on Twitter will know he tends to speak in soundbites. So it was last week, when he held forth on the government’s new policy to make it easier to evict difficult neighbours or as he termed it “Neighbours From Hell”. One can feel the ire expressed in those furious capitals. Did this reflect a bad personal experience, I asked? Sadly the minister is yet to respond to my tweet.

Speaking of confusion, I’m told WH Smith is soon to launch a “QS” service in its fleet of high-street stores. Is the ubiquitous newsagent going to start offering punters a paperback novel and the cost specifications for a curtain wall? Sadly for surveyors they will have to continue waiting to see their profession recognised on the high street. “QS” stands for ’”Quality Solicitors”, as the newsagent begins to offer in-store legal advice. So that’ll be a divorce with your stationery, then.

The latest firm to go down the tried-and tested-route of using female models to sell to blokes is C.K Magma. The manufacturer of “designer” construction gear is sending out a couple of “lovely ladies” to help flog its range of bags and protective site gear. A press release from C.K says: “The UK wide tour kicks off on 6 September in the North-west, followed by the Midlands on the 7th, the South-east on the 8th, the North-east on 13 September and other regional visits soon to be added before the girls head to Europe”. Sounds to me like they could make a construction gear calendar out of the trip …

The national media finally woke up to the significance of the government’s proposed changes to the planning system, with blanket coverage of the new national framework in the Sunday papers, including a front page and three inside pages in the Sunday Telegraph. I understand some anti-development campaigners have been irked by a snippet on the website of planning consultant Nathaniel Lichfield & Partners. “All Systems Go: Positive planning and the new presumption in favour of sustainable development” calls on developers to contact them to “explore new opportunities arising out of the reform” - feeding fear that the changes will lead to a development free-for-all. Might be an opportunity to put something a little more politic up instead?

It was with some alarm that Gleeds’ Yorkshire employees noticed in their local paper that “Gleeds: The Musical” would soon be opening in a Leeds nightclub. Had their limelight-loving chief executive Richard Steer signed his employees up to an all-singing, all-dancing performance? The listing promised an “open air production set to dazzle you with a classic Shakespeare play set in a funky Leeds nightclub”. Sadly for anyone hoping to see the QSs strutting their stuff on stage, the listing proved to be nothing to do with the consultants - it’s a play on words Glee (the US hit TV show) and Leeds. Shame; I was hoping for a press pass. 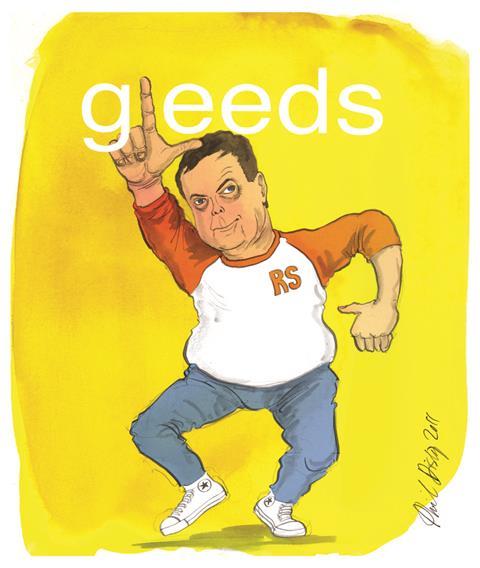 Send any juicy industry gossip to hansom@ubm.com and you can now follow him on
Twitter at twitter.com/#!/JosephHansom