As top brass at the NHBC glides across the dancefloor, Davis Langdon and Aecom’s romance is in decline and one QS can give you a little too much information about the dangers of wet boat decks

To Farookhi, with love
The NHBC is fond of describing its annual competition for the best site manager in the country as the Oscars of the housebuilding industry. Last week’s supreme final was, indeed, a glittering affair, at the new Park Plaza hotel just across the river from the Houses of Parliament. This year’s official entertainment was the 62-year-old Lulu (yes 62, though the audience might have found it hard to believe), singing a selection of R&B classics. Unofficial amusement was provided by the evening’s host BBC TV presenter Kate Silverton, who dragged up a rather reluctant NHBC chief executive, Imtiaz Farookhi, and made him dance in front of the crowd. That sight alone was worth the cost of the ticket.

When the honeymoon is over …
Davis Langdon has been wed to Aecom for nearly six months now, but it seems the honeymoon is well and truly over. The original plan was for the pair to move into the same London office, but that has been scotched. Aecom is staying put at Hatton Garden and DL at MidCity Place on High Holborn. Around 20 ex-Savant (one of Aecom’s earlier acquisitions) people are moving in with DL, I understand, but otherwise it looks like there will be a certain distance in the relationship for a while yet.

… we think of what might have been
Had things turned out otherwise in 2008, it might have been a very different partner walking down the aisle with Aecom last summer. Before wooing Davis Langdon, I understand the American engineering giant gave Turner & Townsend the once over, but it clearly can’t have liked what it saw. With T&T shelving plans to float in the same year, it was a year of stormy relationships for the company. 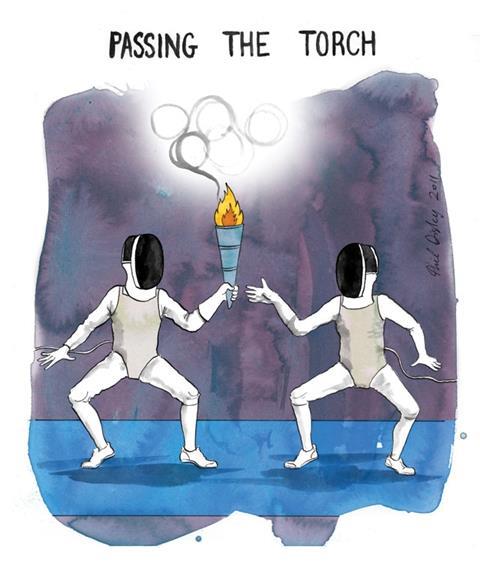 Many industry folk are counting down to the Olympics, but Graham Watts, chief executive of the CIC, will be watching from a slightly different seat than he expected. After 10 years as the performance director of GB’s fencing team, Watts’ term is over after the squad failed to win any medals at the World Championships. British Fencing said its directors had “voted unanimously to bring substantial changes to our elite fencing programme in preparation for the London 2012 Olympic Games”. Construction’s very own Zorro will still be leading the team in 2012, however, according to the CIC. Let’s hope the ODA doesn’t have a similar change of heart regarding contractors.

Man, bucket and dignity overboard
If your office is considering an entry for Little Britain, the industry’s annual sailing regatta, here’s a cautionary tale. Imagine the most embarrassing thing that could happen to you there.

Whatever you come up with is unlikely to be as bad as what befell one senior QS (who shall remain anonymous) a few years ago. His secret has finally been outed by former colleagues, who revealed the consultant was helping sail a pared-down racing yacht with no facilities, when he desperately needed a toilet and was offered a bucket. As if having to pull down your trousers and relieve yourself in front of your shipmates wasn’t bad enough, he then slipped while trying to empty the bucket, and the mess ended up on deck. When he lowered the bucket overboard to get water to sluice the deck, the waves gave it an almighty yank which plunged him into the sea. He left the company not long after.

Professor Plank, we salute you
Building welcomes the wonderfully named Professor Roger Plank as the new President of the Institution of Structural Engineers. But we do wonder how a man with such a moniker can be an impartial judge when it comes to building materials. Could the professor possibly be a cuckoo in the nest of the Steel in Fire Forum, of which he is also a member? And can we trust his views on timber frame construction?