Hansom: So off message

This week protestors fail to spread the word to their comrades, a construction boss is embroiled in the DSK scandal and a press contact for the ODA knows nothing about the Olympics

Protesting is making a comeback - and it’s not just the Che Guevara-lookalike students and moonlighting anti-capitalists joining in. As Building readers will know, electricians have been demonstrating against proposed changes to their pay and conditions for three months now, but last week they held the biggest demonstration yet, with about 1,000 angry sparks marching on the Shard and Blackfriars station in London. What did workers on the Shard make of all this? A couple of bewildered Mace employees told my hack they had “no idea” what was going on. Hardly the impact the protesters were aiming for …

Journalists calling the Olympic Delivery Authority’s out-of-office press number last week were rather surprised to be answered by a woman who had no connection with London 2012 whatsoever. “You are the ninth journalist who has called me this morning asking about something to do with a game,” she said, bemused. “Who are you calling for?” When my reporter explained that her phone number was being broadcast out to anyone with queries regarding one of the most famous projects in the world, her confusion evaporated, quickly replaced with over-excitement. “Oh My God! The Olympics? Really? That’s so exciting.” Clearly an effective way to stir up interest and get the Great British public in the mood and firmly behind team GB …

DSK has another bad day

I was shocked to see the building industry linked this week with the prostitution scandal engulfing the man once seen as France’s next president. Former IMF boss Dominique Strauss-Kahn - against whom rape claims were made and then dropped in August - is once again dominating newspapers’ front pages in his homeland after being linked with a police investigation into an alleged prostitution ring. The Hotel Carlton affair - named after the luxury lodging in Lille - centres on allegations of pimping at top hotels in the city and involves figures such as a senior police officer and businessmen including the head of a Lille-based construction firm. Sacré bleu!

What are the odds?

After a barren six years John Doyle chief executive Stef Stefanou’s stable has finally come good after his horse Decoy won at Cheltenham last Friday. Decoy, a 14/1 shot in the morning, was backed all the way down to around 6/1 before winning the 23-runner Cheltenham Collection Hurdle. Stefanou - who has lately taken to calling his horses “donkeys” during the poor run - said he “nearly had a heart attack” as his horse was almost pipped in the final furlong.

As parents will know, children are like magpies when it comes to the latest gadgets. So Hansom was amused to note the contents of a time capsule buried on the site of the £200m mixed-use Armadale station scheme in West Lothian, Scotland. The capsule - put together by schoolchildren and unveiled by Scottish infrastructure minister Alex Neil on Monday - contains school memorabilia … and a smartphone. Is it wise that the children know where this capsule is buried?

Jeremy Clarkson may not be able to find any electric car charging points in London - a point he made to hilarious effect on Top Gear earlier this year - but he clearly wasn’t looking hard enough. In the basement of Arup’s London HQ are two charging points for electric vehicles.

The consultant, which has been running a £25m electric car pilot scheme in the West Midlands for almost two years, is clearly determined to practice what it preaches. No word on whether Arup’s green-keen employees fight over the limited spaces, though. 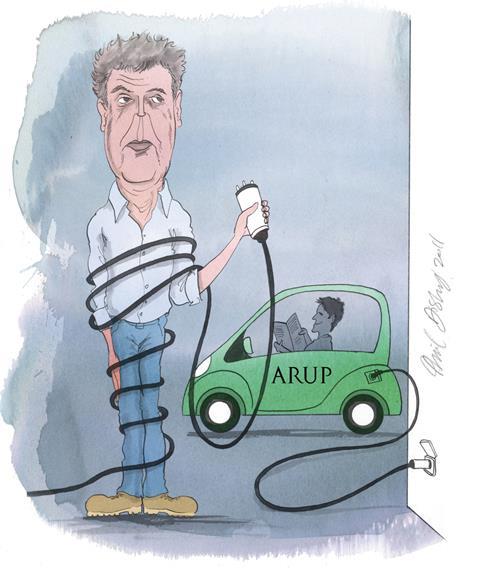