Laing O’Rourke treats its subbies to Mayfair’s haute cuisine, the concrete sector invents a word for the digital age and main contractors take a not-so-subtle verbal bashing – never a dull moment round here

Rather conveniently the large construction site over the road from Davis Langdon’s High Holborn headquarters is a DL project - DL is cost consultant on the eight-storey mixed-use scheme its offices overlook. This is handy for any QS who wants to inspect a site from the comfort of his or her desk. But the proximity also provides other firms working on this project prime advertising space to target one of the largest consultants in the country. It so happens that Mace has a supersize banner wrapped round the core of the under-construction building. I’m told Keltbray, who came before Mace to knock down the previous building, coincidently had its sizeable banner directly in line with the fourth floor reception at DL …

When the press is describing your scheme as a “crisis” (Scotland TV), a “debacle” (Scotsman) and a “fiasco” (Scottish Daily Herald), it’s clear not all is well on your project, from the PR point of view at least. So pity Turner & Townsend, which is set to take control of Edinburgh’s tram scheme from Transport Initiatives Edinburgh in the next couple of weeks. The scheme’s projected costs have soared from £545m to £1bn. In the same week T&T’s appointment was announced, councillors voted to cut the tram scheme in half so that it terminates a mile short of the town centre. But perhaps it’s a good time for T&T to get on board. After all, it can hardly get any worse.

A tale of two Gregs

When two of the industry’s few ministers share the same first name, it’s bound to cause confusion. So I can just about forgive one of my hacks for asking the Green Deal minister Greg Barker’s press officer what Greg Clark’s plans were for the eco-retrofitting scheme (Clark is decentralisation minister at the communities department). The press officer corrected my hack, before admitting: “Don’t worry, it happens all the time.” What does this say about the distinctiveness of two of our industry’s most esteemed ministers?

We’re glad to hear Laing O’Rourke treats its subcontractors to a similar level of gastronomic excellence as it does its clients. The contractor is known to take senior subbies to Wiltons restaurant in London’s Mayfair. According to the Wilton’s website, the set menu is £80 a head, or £150 each with wine. It would seem, given O’Rourke’s reputation for driving a hard bargain, the upside for subbies is that at least you get a slap-up meal.

The clue’s in the name

As expected, last week’s story on main contractors deploying slightly unsavoury tactics to force payments out of their supply chain partners prompted a lively debate on the Building website. Good to see so many reasoned and clear arguments from our readers. One of the contributors, I feel, may have already made his mind up about the subject before he read the article, contributing the comments “scum” and, later, “The fact is these companies cash in on the desperation of many smaller businesses who are taking work on at silly prices to survive.” His cyber handle may give you a further clue to his point of view, if you needed one. It was, simply: “I hate main contractors.”

As a recent Twitter convert there are still many things about this new-fangled social networking that I haven’t been able to get my head around. One of which is tweeters’ propensity to collide the word “twitter” with another to create a compound word, or “tword” (that was my attempt). So we have “twitterati”, “twypo”, “twittilate” and even “twitsomnia”. But by far the most cringeworthy effort I’ve seen is in the bio description on the British Precast Concrete’s twitter page. It reads: “This is the Twittercrete site for the national federation for the UK concrete products industry.” Twittercrete?! I despair. 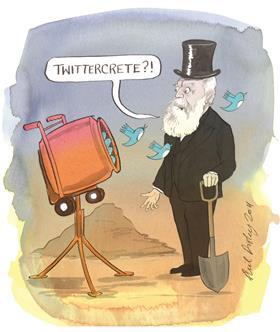