Hansom: The end is nigh

This week, we contemplate our mortality in the form of moribund school programmes, vanishing staff, and Brits making their final exit from the Middle East … meanwhile, death stalks the Euston Road

The press officer at Bam Construct seemed a little flustered last week when one of my colleagues phoned. The company had just lost its place on the Procure 21+ health framework and he was no doubt tired of fielding calls asking why. But I gather there was more to it than that: one of its school sites had just been invaded by travellers. He told my colleague they wait for the summer holidays and then make their move. On the bright side, there will be fewer sites on offer once Michael Gove has had his way with the school building programme.

My colleagues at Building have received some strange tips over the years but a recent hint, if that’s what it was, was bizarre indeed. It came in an envelope postmarked Croydon, and within were six photocopies of envelopes, each addressed to a member of staff at Atkins Rail. Written by hand on each were the chilling words “GONE AWAY”. What could it mean? A veiled threat to do away with these people? A mole inside Atkins seeking to inform us of strange disappearances? Or was it the office manager’s way of telling my pals in the subs department to stop sending copies of Building to staff who’ve moved on?

O brother, where art thou?

At a recent hearing ahead of a tribunal on the blacklisting of construction workers, my colleague got chatting to a man who had been on the list. Asked whether some union leaders’ enthusiasm for calling strikes damages the union movement, he argued that strikes were less common than people believe, even on such notorious projects as the Jubilee line extension in the 1990s. He turned to his half-listening colleague for support: “I mean, how many strikes did you take part in on the Jubilee?” The reply: “Hundreds.”

A matter of life and death

What does it take to get a new pedestrian crossing installed in central London? More than you might think. Traffic-clogged Euston Road has recently had a new one built, the first in a decade. This followed several years of hard lobbying by an architect and local developer, which the council was initially resistant to. How was the opposition overcome? It appears that the chances of having a new crossing approved are enhanced by a pedestrian fatality on the stretch of road in question. On average, there are 15 casualties a year on Euston Road. Sadly, it was not long before the conditions for a new crossing were met.

Pity expats in the Gulf. Already grappling with the disappearance of Dubai, they’re now facing the threat of a ban on their BlackBerries in the UAE and Saudi (as if Saudi weren’t a tough enough gig already) as governments clamp down on electronic communications they are unable to intercept. But coming home to the UK could be even more problematic for those in the UAE at least, as a Equifax, a consumer credit reporting agency, warned that because there was no exchange of credit data between the UAE and UK, Brits could have trouble getting a loan or credit card in Blighty. Ouch … Although, with personal debt in the Gulf rocketing to £88bn, perhaps it’s better to keep those credit records under wraps … 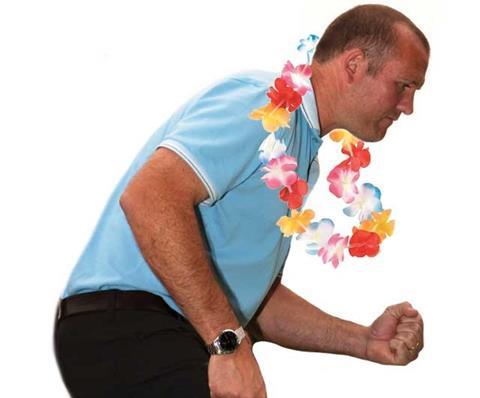 Following Building’s crazy golf event (see page 34) my colleagues checked in this week with one of the players, Trevor Mills, who partnered the former All Black Zinzan Brooke, who is also his boss at Number 8 Construction and Consulting Services. On the day Mills, whom I think I can safely say is a man’s man, with stature to match, took a liking to a Hawaiian-style garland of plastic flowers handed out at the end of the game. Asked 10 days later whether he had finally removed it, he replied: “It’s still in the car. I can’t bring myself to throw it away … too many memories.”