David Beckham, Annie Lennox and Jay-Z hotfoot it to the Metropole, Mr Bill Ding has an appointment at the magistrates’ court and the communities department invites charges of hypocrisy

Regeneration at its best

Like most clients these days, the government is seeking to rationalise space and sell off buildings it can live without.

For example, the communities department reduced its four buildings to one, Eland House, last October. This laudable move has reduced the department’s property budget by an average of 18% a year (by £4.5m in 2009 and £3.5m in 2008), according to a letter the ministry published this week. According to the department, the letter was its response to a freedom of information request from Jake Sumner, a former adviser to a former secretary of state. However, the department spent a whopping £2.78m on the refurbishment of Eland House itself. The bill included £287,850 for the atrium, £83,506 for glass meeting pods and £134,503 for red sofas (we suspect they weren’t from DSF). Austerity, it seems, does not begin at home.

The troubles besetting the £100m refit of the Savoy hotel by contractor Chorus, which is currently scheduled to open this autumn, about a year late, may be taking the limelight from another major London hotel refurb. I refer to the old Metropole hotel, just down the road from the Savoy, which is being revamped by contractor Ardmore for Corinthia Hotels for a price thought to be in the region of £90m, and is due to open next year. A mole tells me the new operator is determined to surpass the Savoy as the place to kip for celebs passing through the capital. Apparently David Beckham, Jay-Z and Annie Lennox are among the stars who have been tempted to the site in recent months to look at show suites. Which, if true, begs the question: don’t they have better things to do with their time? 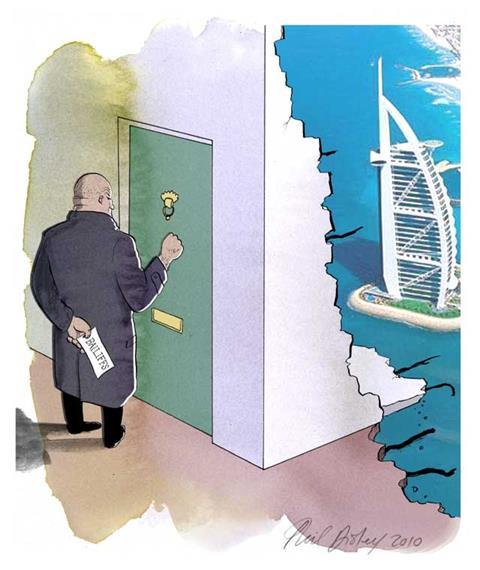 Why keep an office open in Dubai these days? That’s the question we address overleaf, largely by asking firms if they are still interested in the emirate as a market, seeing as construction has all but ground to a halt and legal disputes are the closest thing the city has to a boom industry. Whereas last year this might have elicited veiled and diplomatic responses, it seems that WSP, at least, has changed tack. The consulting engineer is among the creditors of Nakheel, the developer that last November asked for a “standstill” on its debt repayments. Tom Smith, WSP’s head of international, told us: “Yes, we’re interested in staying in Dubai, in as much as we’re interested in collecting the money owed to us there.” The gloves appear to be off …

The boss of one consultant I spoke to last week was more honest than many when talking about the generous £223m paid by URS to take over Scott Wilson. Rather than sniping about how the British consulting engineer would now be a tiny cog in a big American machine, or insisting that remaining small and niche was the way forward, he shook his head from side to side and said: “I thought, the lucky, lucky bastards. I wish someone would come along and pay that much for us.”

I watched a Health and Safety Executive mock trial in Northampton last week, along with a few dozen builders. There was a tortured chuckle as the characters were introduced - these included Justin Case and Bill Ding. However, one builder raised his hand at the end of the trial and asked, “Was this a real case then?” The chair of the bench, Shoosmiths’ Ron Reid, made a withering reply: “No. Nor is there a company called Wendy Houses.”

Not interested in Toy Story 3 or the return of the A-Team? Then check out the Wood Windows Alliance’s latest blockbuster - the catchily titled Wood Windows CO2t Less - starring the affable Dr Murphy from Imperial College. It made for an enlightening eight minutes of viewing - almost exactly the time it took to polish off the large bag of popcorn they thoughtfully included with it.