According to the PRs it’s been another brilliant week for the construction industry - so please ignore the hints of commercial bias, the whiffs of pub quiz favouritism and accusations of slanted journalism

Steering in the right direction

“Managing property effectively can reduce the space needed by 30%, with potential savings in running costs [to local government] of up to £7bn a year,” trumpeted a report last week by think tank, the Westminster Sustainable Business forum. Eric Pickles was a big fan. But what’s this? The report was sponsored by three companies all with remarkably similar lines of business in estate and property management: Interserve, Colliers International and Consensus Business Group. All three companies had representatives on the report’s nine man steering group. But fret not; a spokesperson for the report said that the sponsorship in no way affected the outcome of the study.

Building has already reported how the dramatic cut in funding for social housing announced in the October spending review could have been so much worse - until just a few days before the announcement, no money at all was in the pot. Recent rumours suggest the nuclear option of cutting funding entirely was considered after the government realised it wasn’t going to get out of the notorious £4bn contract for two aircraft carriers (for which there will be no planes). Some in the housing sector are wondering if there can’t be a quid pro-quo between social housing and the navy. The Tories once promised us prison ships - why not social housing vessels?

The launch of Costain’s new iPad app at the Tate Modern began with an assertive presentation from the management team followed by the pub quiz to end all pub quizzes. Each audience member was given an interactive handset, with the winner destined to keep their new toy. As the top 10 brainboxes were unveiled, it was Building’s very own deputy editor, Sarah Richardson, who came joint top. But Richardson was to be cruelly denied the prize as her fingers had not been as quick on the keypad as her rival - who we understand to have been an ex-employee of … Costain.

Thank you for the music

Colleagues of the director of the UK Contractors Group, Stephen Ratcliffe, probably already know of his regular piano lessons. Now he’s signed up to appear on Radio 4’s musical quiz, Counterpoint. To get on the show he had to answer questions over the phone. After scoring just 11 out of 25, including failing to name three songs by Abba, he’d assumed he wouldn’t get on, but he has. So how he will acquit himself when the day comes? Tune your dials - 12 April. No pressure, now.

I’m not paranoid; they’re following me

We all know that, thanks to the recession, construction has changed. But some believe things are now rather more sinister than ever before. Consultancy Roscoe
and Scott Wilson have organised a series of talks called, “Construction - the need for change in the new world order”. Presumably they know that the “New World Order” is a conspiracy theory where a cabal of freemasons/Illuminati/shapeshifting 12ft lizards secretly control the world?

The London Assembly’s transport committee last week held back-to-back public sessions on the capital’s two most important transport projects: Crossrail and the tube upgrades. MPs were keen to hear from London Underground chief executive, Mike Brown, about “what progress has been made on improvements to the tube that will mean Londoners see an end to regular disruption and delays?” It was perhaps unfortunate, then, that the meeting opened with apologies for latecomers who, chair Val Shawcross admitted with a smile, had been held up by, yes you’ve guessed it, tube delays. 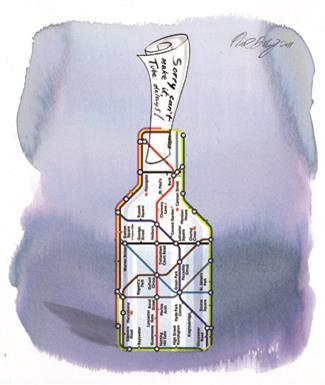