You’ve got to innovate to stay ahead of the game, as demonstrated by this week’s super-size canapes, rowing on the roof of Selfridges and the fact I can now be found on Twitter …

The news last week that Delancey and Qatari Diar have succeeded in their high-profile bid to take on the 2,800-home athletes’ village after the Olympic Games, instead of the Wellcome Trust, will not come as a surprise to seasoned Olympic watchers. My spies tell me that the story - reported in Property Week - is correct, and that the Wellcome Trust’s failure torpedoes its £1bn bid to redevelop the park in legacy mode. The well-connected Trust is - so I’ve been told - thought to have annoyed those leading the process by attempting to go above the heads of decision-makers the ODA, by lobbying ministers and refusing to accept the bid criteria. However, rumours suggest the ODA’s decision was not an agonising one - gossips say the Trust’s bid price was about half of that tabled by Delancey and QD.

Fancy going rowing on the roof of Selfridges, London’s famed department store? Well for one weekend only, you can. Food artists Bompas & Parr are erecting a pool filled with 60 tonnes of water this weekend on the shop’s roof. To ensure the structure doesn’t plummet through the building, the roof will be reinforced by 190m of steel. The stunt is to celebrate the launch of a new sweetener, reportedly 200 times sweeter than sugar. I hope it doesn’t also have 200 times the laxative effect of a normal sweetener or you may have to cut your boating trip short.

My journalists are never ones to turn down a tipple and a canape, so Building turned out in force at last week’s Davis Langdon (an Aecom company) annual summer reception. It was interesting to note the event’s return to Temple Gardens after last year’s departure to the Tate Modern. Could this be a desire for
closer continuity with its independent Davis Langdon past? In any case, kudos to our hosts for the substantial canapes, some of which were served in brick-sized cardboard containers. Perhaps they have absorbed some of the customs of their parent company’s nation.

To the autobahn, Robin!

It is often said that construction is a testosterone-fuelled industry. Which goes some way to explaining why 22 staff from Weston Homes got behind the wheels of a fleet of Robin Reliants to race across Europe. The “Numball Rally” saw staff speed from their office in Takeley, Essex through Denmark, Holland and Germany to raise money for charity. Although “speed” may not be the word - the 40bhp three-wheeled cars have a top speed of 85mph, hardly the fastest thing on an autobahn.

While I may be Building’s longest-running columnist, I like to think of myself as a pioneer first, columnist second. In 1834, a decade before I founded this publication, I invented the Hansom cab, which transported the gentry of London, Paris and Berlin from their parlours to the music hall. In fact, I have always been keen to try out the latest gadgets - that iPhone isn’t just for show you know. So this week I joined Twitter. If you can’t wait until Friday for the latest industry gossip, come and have a follow @JosephHansom.

Anyone who tells you lobbying is an easy business should speak to Rudi Klein, head of the Specialist Engineering Contractors group. Klein claims that during 1995-96 he spent up to 70 days in Shepherd’s restaurant near Westminster, to try to persuade MPs to vote through the Construction Act. He describes it as “the most concentrated period of drinking” in his lifetime. While his liver may not have approved, we can now raise a glass to Klein’s efforts. The Construction Act passed with many of the SEC Group’s recommendations incorporated. 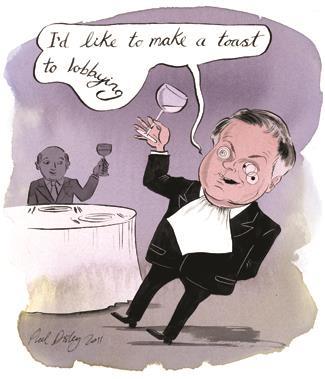