This week effort is rewarded with slimmer waistlines, a praiseworthy ranking in the Green List, and a spotless building site – there’s even hope for those HS2 opponents now they have a new ally …

Swim to save the planet

Congratulations to Willmott Dixon for placing 17th on The Sunday Times Green List 2011. The awards acknowledge businesses that are making fundamental changes to the way they operate for the benefit of the environment. One wonders if the judging panel overlooked a quibble in St Albans between the green-friendly contractor and local residents. Willmott Dixon came under fire from Holyhill Well residents for felling trees to make way for a leisure centre development. Perhaps the judges felt an indoor swimming pool in St Albans was indeed the best thing for the planet.

What is it with education at the moment? It seems that, hot on the heels of the announcement of Tim Byles’ departure from Partnerships for Schools, it is understood that the board of charity the British Council for School Environments will announce “high level change” in its leadership to members next week. It is rumoured that this will include the departure of Ty Goddard, founding director of the body, whose diatribes against the running of the school building programme seem to have become something of a personal crusade over the past few years. Goddard is understood to be planning to remain in the education sector - but a glance at the recent history will assure you that one place he won’t be turning up is Byles’ new schools development venture, Cornerstone.

Paul Morrell’s pledge at Building’s annual Terrace Reception to practice what he preaches and cut 15-20% of his own body weight “over the life of the parliament”, was met with enthusiastic endorsement by other members of the industry, including director of SEC group Rudi Klein, who promised to follow suit. This is fast becoming a fashion among (middle-aged, male) construction professionals, it appears. My spies were lucky enough to receive an email from UK Contractors Group director Stephen Ratcliffe on the subject: “I want to record I have already lost two stone in the past 12 months,” he says. “So I am ahead of Messrs Morrell and Klein!” Some people are so competitive.

Good to see national newspapers running with the “news” of Sir David Higgins’
re-organisation of Network Rail last weekend. According to the FT and Sunday Times, the rail infrastructure giant is to compete for work overseas and to turn its major projects division into an independent business competing for UK work. Sound familiar? Well, this would be interesting new information were it not a direct repetition of stories reported by us months ago, which included an in-depth profile with Higgins, the former ODA boss. Do try to keep up now.

Last week I mentioned seeing, from my lofty perch here at Building Towers, some Balfour Beatty subbies dumping rubbish on the Blackfriars station overspill site. Well, it would seem my admonishing citation had an effect. The once-sullied site is now spick and span. Oh, what it is to be so powerful and so revered. I’ll have to get someone else to write this column for me soon.

Britain may have invented the steam train but when it comes to operating a modern rail system the country is still languishing in the sidings. HS2 has met many obstacles, from the inhabitants of picturesque villages in the Chilterns concerned for the value of their homes, to pragmatists who ask if the charms of Birmingham are so abundant that we can’t wait an extra half hour to get there. Now it seems that the Queen also disapproves. An article in a Sunday paper claims Prince Andrew has raised his mother’s concern with the Treasury that the noise might perturb horses she owns on a Warwickshire estate close to the proposed route. Expect to see “not in my backyard” banners unfurled from Buckingham Palace sometime soon. 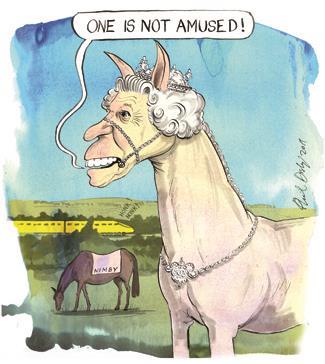