How ECO cuts could leave the sector with under 1,000 jobs

At the Association for the Conservation of Energy we’ve done the maths on what a cut to ECO would mean to jobs, it’s not pretty 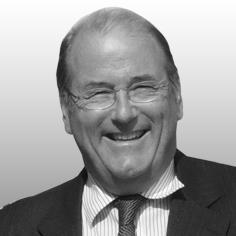 I was going to write this week’s blog on the implications of propossed cuts to the Energy Companies Obligation on jobs in the sector. However, my colleagues at the Association for the Conservation of Energy and I, have already put together a detailed analysis as part of a report to government on the issue.

I couldn’t say it any better than that. So here, in full, is the analysis of the impact on jobs from ECO cuts taken from our report.

In July 2012 we projected and today still estimate that 33,000 people are employed this year in delivering insulation under the Energy Companies Obligation. Many more are employed in delivering heating systems, boilers and heating controls. We do not currently hold the necessary data to make robust estimates of the number of jobs supported by heating improvement activity under the ECO (which takes place principally under the Affordable Warmth and Carbon Saving Communities Obligations).

Our employment estimates are made by looking at projections from the government’s own Impact Assessment on ECO and Green Deal: of how many insulation measures need to be delivered by the ECO, and using government assumptions, also from the Impact Assessment, of how many people are needed to deliver them. These assumptions relate to the number of installers required (direct jobs), and the number of people employed as a result across the supply chain (indirect jobs). The supply chain encompasses manufacturing, supply, distribution and development. All jobs estimates are expressed as full-time equivalents (FTEs) – one FTE is one person employed full-time for one year.

We have modelled a number of new scenarios based on watering down or removing the ECO. These are:

·         Extending the ECO by two years to March 2017, without increasing the size of the obligation

As a reminder prior to presenting the employment implications of weakening the ECO, we present in Figure 1 the original estimates from our earlier July 2012 study. The 2012 estimate has been updated as we now know the actual number of measures delivered by the CERT and CESP programmes over the course of 2012. In that year, we estimate nearly 57,000 people to have been employed to deliver insulation under CERT and CESP. We estimated that 33,000 would be employed full time to deliver insulation under the ECO in 2013, based on the final impact assessment’s projection of the number of insulation measures required. As the ECO has been expected to ramp up gradually, the number of FTEs increases in our estimates to 2015: 40,500 in 2014, and 46,000 in 2015. DECC say that up to 60,000 could be employed in the industry by then.

The insulation industry has already been through a very tough time adjusting to the abrupt transition from CERT and CESP to the ECO.As can be seen in Figure 1, there are approximately 24,000 fewer FTEs in 2013 compared to 2014 as is. According to the National Insulation Association, this has resulted in 5,500 mostly direct job losses by June alone. It is hard to track wider supply chain job losses, but these are likely number many more than 5,500. 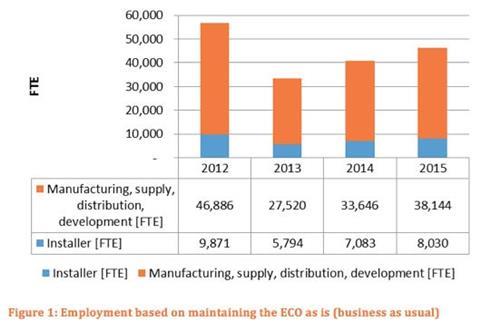 Assuming that the ECO is watered down by halving the size of one of its obligations from 2014 (the Carbon Emissions Reduction Obligation, CERO), and that half the number of measures get delivered under CERO as a result, then 23,000 people would be employed in delivering ECO and the Green Deal next year: 10,000 fewer than in 2013. If the ECO were to continue as originally planned, then ACE estimates 40,500 people would be employed in delivery in 2014. So, 10,000 jobs would be lost compared to 2013, and an additional 7,500 new jobs in delivering ECO and Green Deal would be foregone. Indeed, these 7,500 jobs foregone in 2014 apply to each of the scenarios presented in this section. 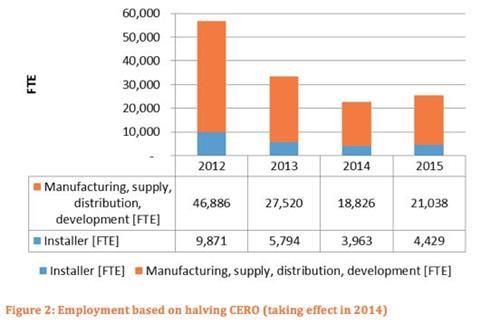 Extending the ECO by two years to March 2017

This scenario sees the ECO extended without its target being increased, in essence diluting the level of activity required to meet its targets. As shown in Figure 3, the effect on employment is worse than in the scenario above, with just 20,000 FTEs required to deliver the ECO in 2014, a loss of 13,000 jobs compared to 2013. 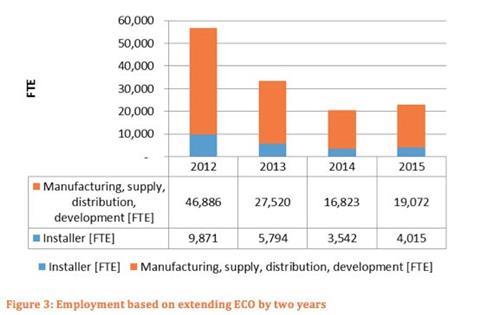 Unlike the previous scenario, this one dilutes the delivery of all three obligations, not just the Carbon Emissions Reduction Obligation. It results in half the number of measures being delivered under the Affordable Warmth and Carbon Saving Communities Obligations – i.e. to those people who need support the most.

This scenario sees the loss of 28,000 FTEs in 2014, and leaves the ECO a true shadow of what it has been to date and could have been. Affordable Warmth and Carbon Saving Communities Obligations are in principle fully maintained. However, it is quite likely that this level of activity reduction sees the loss of economies of scale in installation, delivery and administration costs, with the result that value for money worsens. 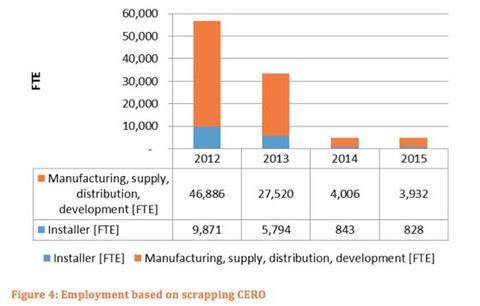 This scenario sees the loss of 32,000 FTEs in 2014. Just under 1,000 people would remain employed in delivering loft and cavity wall insulation via Green Deal finance. This is based on making the perhaps generous assumption that 20% of the lofts and cavities projected to be installed under the Green Deal and ECO framework would still be delivered by Green Deal finance on its own. To date, 219 Green Deal finance plans have been completed. 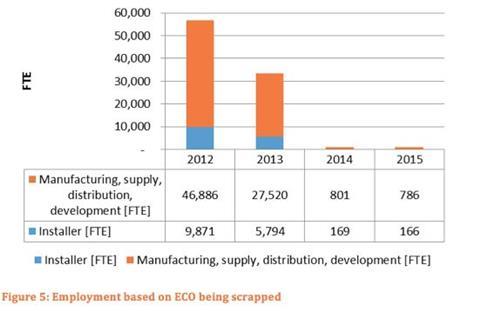