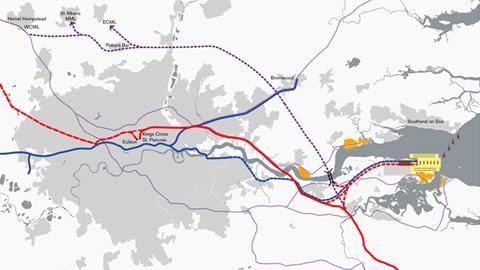 This week, readers have had it with airports near their homes, having to operate at unsustainable margins, those late-paying main contractors and architects’ stardom-seeking experiments

Transport it away from us

Regarding your story Foster + Partners unveils Thames transport hub (1 August, www.building.co.uk), it may improve the quality of life for those in London, but I fail to see how it will do the same for those of us living directly opposite the proposed airport on the north side of the Thames in Essex.

On a clear day the caravan site where the airport will go can be clearly seen and you can’t miss the power station to the left. Add to this mix Southend’s own airport expansion with the arrival of EasyJet next year and we would be sandwiched between the two. People tend to forget that my side of the river is heavily populated.

On the plus side, I guess we might pick up some trade from plane spotters who would be able to sit in a deckchair on the beach watching the planes taking off and landing.

It should be further out nearer to Margate - sorry Margate, right by the wind farm …

It is concerning that the number of young workers in the UK construction sector has more than halved since 2008, as reported this week by CITB-ConstructionSkills.

Scottish employers remain committed to delivering high-quality apprenticeship opportunities in the industry. In Scotland, the number of construction apprentices registered over the past three years has held up well despite the tough trading conditions.

The Scottish government has set itself the target of creating 25,000 apprenticeships per year. It should focus a significant share of this ambition on support to expand the availability of construction apprenticeships.

The construction sector provides quality training frameworks that equip young people with skills that are highly sought after in the labour market. The recession has hit the Scottish industry hard but longer-term prospects are good, with new industries such as renewable energy emerging.

Without action to foster additional apprenticeship opportunities in the construction industry, we face a potential major skills shortage in future years. What’s more, it will make the Scottish government’s apprenticeships target very hard to meet.

Regarding your story “Willmott: Listed firms too bullish” (22 July, page 12), it’s refreshing to hear a realistic view. We are a major timber frame manufacturer supplying a number of sectors of the industry. The common factor we find is that all the companies in the supply chain are operating at margins that are unsustainable in the medium to long term.

Late paying has had its day

In reference to your story, “Minister vows to name and shame late paying contractors” (20 July, www.building.co.uk), this is long overdue. I suffered when my specialist subcontractor (steel) went into receivership over late payments on several BSF projects.

All the main contractors applied a 90-day take-it-or-leave-it attitude. This is effectively a 120-day wait to receive the funds. You are funding the big boys to the tune of a quarter of your whole turnover.

Back to blocks and squares

Regarding Hugh Ellis’ article “Bring back garden cities for the 21st century” (7 July, www.building.co.uk), this is what the traditional urbanists have been saying for years. Look at the success that Poundbury in Dorset has had. Designed by Leon Krier and commissioned by Prince Charles, the town exemplifies what ought to be done when creating new communities: use the patterns of the best places and use that DNA as the basis for organic growth. The same ought to be said for towns and cities. Take the
counter-proposals for the Chelsea Barracks development where the prince rightly criticised Lord Rogers’ design as inhumane. It is time to stop the experimentation of the likes of Rogers for the sake of stardom and embrace traditional elements of placemaking: buildings, blocks and squares.