In the latest twist in the saga, Interserve has provided the additional interest Mouchel has hoped for

So, after rejecting every one of Costain’s bids for the firm, Mouchel’s directors have finally found someone else interested in taking a look at their books. A few names had been doing the rounds, including Capita, but Interserve emerged as the “preferred possible offerer”, to use Mouchel’s description.

Not surprisingly, Mouchel’s shares took off at the news of further interest, rising by 10% in the last week, while investors either bought back short positions in Costain or bought out of relief that they may not be successful in their takeover attempt. Costain shares increased, albeit marginally, by 0.7%.

Interserve shares fell, as is often the case when one company tries to buy another. Hedge funds call this “risk arbitrage”. They will buy shares in the company being taken over and short shares in the acquiring company, making money as the bid comes closer to fruition.

While this is a strategy some hedge funds specialise in, analysts have some input too and not all of the reaction to Interserve’s move has been positive. Kevin Cammack of Cenkos said: “Putting one poor business together with another poor business simply makes one even bigger mess.” He expects Interserve to use its shares to fund the deal - if one materialises at all.

But Costain isn’t out of the running just yet. It can still make yet another offer but is likely to wait and see what happens with Interserve. Costain’s is still the only offer on the table and there is no guarantee Interserve will even make a move.

Despite this fact, Mouchel’s directors must be pretty happy with themselves. After holding on and rejecting Costain’s advances, they pressed on with their debt refinancing, no matter how draconian the terms and they have managed to drum up the interest they craved. All they need to do now is turn this interest into a rival offer and let their shareholders decide their final fate. 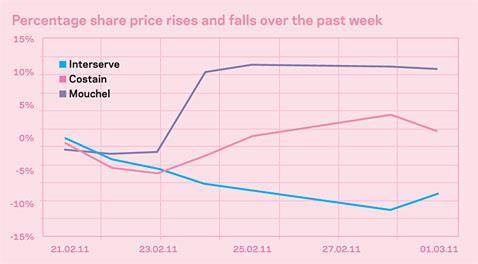