The QCIC director on never owning a Blackberry, buying curries online and building his own PCs 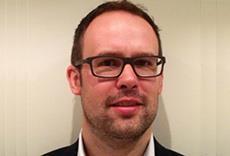 At the moment, Pinterest can get me hooked on photos of anything, from architecture to bad CCTV camera installation.

Backing up my personal photos in multiple places. I think it’s the 21st Century equivalent of keeping all of your old photos in various boxes and albums in drawers and under sofas.

iPhone for work, Android for play. I have never owned a Blackberry, and now probably never will.

I only use Twitter occasionally to see what the public are saying when major incidents happen, so I follow trends rather than individuals.

I like apps that remind me to do something or that automate tasks. Something like Tasker for Android can be very powerful and appeals to the geek in me.

Face to face, although I’m of the generation that began work with email and I have to fight the clichéd tendency to email someone on the other side of the room.

PC. I enjoy using Macs, but I went through a phase of building my own PCs and they stuck.

Since a gig a few weeks ago it’s been Frank Turner. If you don’t know him he’s the chap with an acoustic guitar who appeared in the London 2012 Opening Ceremony.