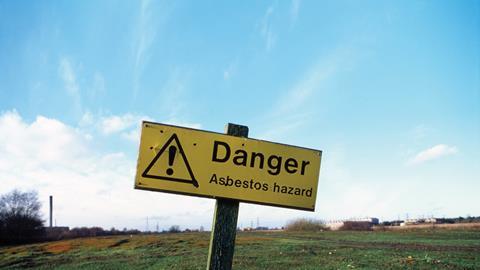 From tomorrow stricter regulations will govern even low-risk asbestos work, triggering new obligations for contractors and property owners. Building reports on the risks for the industry if it doesn’t follow the legislation to the letter

Last week’s ruling by a panel of Supreme Court judges over a raft of claims for asbestos-related illnesses was a huge victory for those whose lives have been irreparably damaged by exposure to the noxious fibres. It makes clear that employers are responsible for preventing exposure to asbestos, rather than just dealing with the consequences if a disease is contracted. Furthermore, to be liable employers only need to have contributed to the risk of contracting the disease, rather than been proved to have caused it.

The ruling, which lawyers have said will pave the way for a spate of asbestos claims, leaves property owners, contractors and their insurers with little defence against injured employees, and should serve as a stark reminder of the responsibilities employers have to protect their staff.

The reminder could not have been better timed. According to an industry-wide survey of property managers and their contractors, revealed today in Building’s news pages and the first of its kind for nearly 10 years, there are large parts of the industry that still are not getting the message. The upshot from a range of detailed questions on asbestos is that 30-40% of the people who should be managing asbestos risk in buildings still are not fully aware of their responsibilities.

Amid this backdrop of persistent ignorance, tomorrow marks the introduction of a significant revision to the 2002 Control of Asbestos Regulations (CAR), which will change contractors’ responsibilities over a range of everyday work. The revision, made after the EU deemed our rules not strict enough, will bring a multitude of everyday tasks under the gamut of asbestos rules. So how badly behind is the industry? And what impact will the new rules have?

Last time an industry-wide UK asbestos survey was carried out, in 2003, less than a year after the introduction of the CAR, it revealed a shocking ignorance of the rules, with 83% of companies not having asbestos plans in place, and more than half not even aware of the rules. As you would expect, a decade later, the findings of the Great British Asbestos in Buildings Survey finds awareness has improved. But not nearly enough.

This has far-reaching implications on how people will have to work. It’s a positive step, even if it is onerous. My concern is awareness is low

The survey of more than 600 people, backed by Asbestos Inspection Bodies, a consortium of firms accredited to carry out asbestos work, and the UK Accreditation Service (UKAS), finds that, 10 years later, there is still an alarming lack of awareness of responsibilities. For example, 37% of in-house staff undertaking building repairs and maintenance said they had no details or did not know if they had details of what asbestos presence there was within their buildings, despite it being a regulatory requirement.

A similar proportion said asbestos was not identified or clearly marked. Of all respondents, 36.5% said there was no need to have qualifications to carry out an asbestos survey, despite the fact the legislation says you have to be a “competent person”, and the only industry-accepted way of doing this is by passing a UKAS course.

Other findings included a large minority saying they had received no asbestos training within the past four years, despite guidance suggesting it should be done annually. Chris Miller-Hanna, director at asbestos contractor PA Group, and one of the sponsors of the research, said: “It seems we’ve still got 30-40% of people operating in our buildings who are supposed to know about this stuff, that don’t know fully what they’re doing. I don’t want to be scaremongering, but the upshot is there could be people operating in buildings unaware they’re being exposed to asbestos.”

With almost 5,000 deaths recorded in the UK from asbestos-related diseases, and insurance claims set to top £100,000 each, the corporate risks of not confronting this issue are stark. There is even the chance of an employee’s representative using corporate manslaughter legislation introduced by Labour against bosses who have been negligent in this area.

This record of continued unawareness does not bode well for the introduction of the CAR 2012 revisions (see ‘The New Rules’, above). The revisions will mean that any contractor carrying out work where asbestos is present but the risks are low, will now have to notify the Health and Safety Executive (HSE) in advance, store a record of it, provide adequate training to staff and, ultimately, provide regular health checks and hold health records. Acts as simple as drilling into an Artex ceiling panel to fit a light fitting will trigger the new rules. Policed by the HSE, each individual breach will be punishable by a £5,000 fine. Matt Clare, director of Trident Building Consultancy and chair of the RICS building surveying group, says: “This has far-reaching implications on how people will have to work. It’s a positive step, even if it is an onerous one. My concern is the awareness of it is extremely low.”

Miller-Hanna says the move will mean contractors will have to choose between dealing with these responsibilities, with all the additional costs, or subcontracting simple tasks to specialist asbestos contractors.

The costs of training and the bureaucracy are not the only burdens the new rules will impose on those who choose to bring the work in house. Ian Insley, partner at law firm Piper Smith Watton, says: “We will have to wait and see how the HSE approaches enforcement, but we have to assume it will look to enforce it as strictly as it can. There are also reputational risks for being found to breach asbestos regulations, as it’s a subject that grabs headlines.”

However, there is also concern that bringing a new area under the aegis of CAR may widen employers’ civil liabilities against anyone suffering an asbestos-related illness in the future. “Our advice has got to be to err on the side of caution,” says Insley. “Even if you think you can do this work, you should be taking proper advice from a company that is licensed and knows about asbestos.”

This potential widening of contractors’ and consultants’ liabilities is not something that has escaped the notice of insurers either.  Richard Muse, managing director at Gerrard Insurance, says any main contractor hoping to do any of the works that fall under the new regulations will have to get a new insurance policy. “The general contractor policies have a generic asbestos exclusion. However, if your staff are doing any asbestos work - whether it be 5% of their time or 100%, it doesn’t matter - you’ll have to go to a specialist asbestos insurer.” Experts predict this could increase contractors’ liability insurance costs by 300-500%.

Consequently, the move could see an increase in work for specialists. “We’re already getting enquiries,” says Miller-Hanna, who will charge contractors a call-out fee for any
work needed under the new rules. “It’s not a deal breaker for a project, but it’s a small percentage increase on lots of projects and it’ll undoubtedly cost millions across the industry. People are surprised and shocked when they see the regs, and logistically and practically they’re just looking at how it’s going to work.”

The other possibility is that the new regulations will be ignored by contractors already being squeezed by cut-throat margins on building work. Clare, of Trident Building Consultancy, says: “My fear is that in this market I can imagine contractors being tempted to cut corners.” Given the awful outcome of failing to get a grip on asbestos problems, this is something that both those working in the construction industry, and its big employers, can’t afford to let happen.

The Control of Asbestos Regulations 2012 come into force tomorrow, 6 April. It changes the current two-tier regime, where work with asbestos is either “licensed” or “non-licensed”, depending on whether it can be carried out by non asbestos-licensed contractors. The reforms add a third tier - non-licensed notifiable work - for a variety of low-risk asbestos work.

This will include work with Artex textured coatings, floor tiles, bitumen roofing products and cement panels that could have been installed before 1999. Almost any work on the relevant materials triggers the rule, including drilling, altering ductwork or removing asbestos-containing floor tiles.

In future, the HSE will have to be notified of all work with these products, respiratory protective equipment will have to be used, medical records kept and, eventually, medical checks done on participating staff. Contractors will also have to fill out risk assessments and a method statement for each work stating what measures have been taken to mitigate risk of asbestos contamination.

If at any point after the works the relevant documents are not available for inspection, contractors will be liable for a fine of £5,000 per rule breach. There will be a three-year transition period, to 30 April 2015, before the medical examination requirement comes into force.