PLP: So business is looking up? 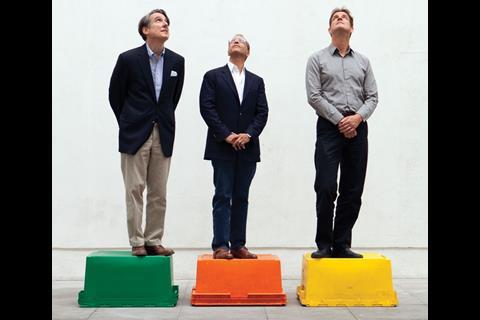 Left to right: David Leventhal, Lee Polisano and Ron Bakker consider the possibility that it will rain later … 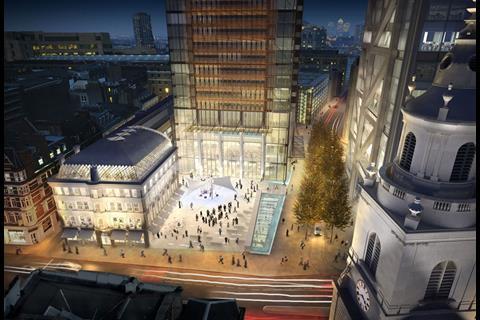 The Four Seasons hotel and residences in London’s Heron Plaza

Remember the Polisano crew who busted out of Kohn Pedersen Fox and started up on their own? That must have been a year ago now. Emily Wright found out what happened to them next

Exactly a year ago, the construction industry witnessed one of the most extraordinary company splits for years. Five partners from American architect Kohn Pedersen Fox (KPF)left their London office last September to set up on their own. All the elements of a cracking industry yarn were there: ambitious characters, a failed management buyout, rumours of a transatlantic power struggle and some of the biggest and best known schemes in London and elsewhere, including the Heron Tower, The Pinnacle and the Four Seasons hotel in Abu Dhabi.

It seems the break had been a while coming. Two of the five, Lee Polisano and David Leventhal, had moved from the States to head KPF’s London office in 1989 and the basic disagreement was over the degree of control that the New York partners exercised over the office. This led to increasing frustration among the UK partners, and Polisano, Leventhal, Fred Pilbrow, Karen Cook and Ron Bakker left in September last year. That move was followed by another equally newsworthy decision by 79-year-old Gene Kohn, one of KPF’s original directors, to relocate to the UK to restore order.

Earlier this year Building spoke with Kohn about his move and his new life in the UK as well as finding out what his plans for the UK business were. But what of those directors and PLP Architecture, their new venture? There was plenty of coverage of the firm the end of last year, centring on its retention of a number of KPF clients, including the Heron Corporation and Grosvenor, and its growth from five to 65 staff in two months. But how are things 12 months down the line? Building went to PLP’s Camden office to meet Polisano, Leventhal and Bakker and find out.

‘You’d be mad not to worry’
“We are in a strange position,” says Polisano. “Most people in their right mind wouldn’t have set up a company at such a bad time for architects.”
“Luckily we didn’t think too hard about that,” laughs Leventhal. “And we didn’t have much choice.”

Thankfully for PLP, despite such the bitter economic weather, they appear to be doing pretty well. The head count has gone up to 75 and work is coming in from the UK and abroad. So is everything as rosy as it appears? “Do we worry? Of course,” says Leventhal.

“Any architect today would have to be out of their mind not to be worried.”
“It’s not like we’re just five people alone in a little place,” adds Polisano. “We have 75 people working for us and we feel real pressure. Those 75 people have dependents so you’re talking 150-200 people or more immediately relying on the success of what we do every day. There are sleepless nights.”

Don’t look back in anger
Although the partners are keen to focus on their future plans, they understand the industry’s interest in how PLP Architecture came about.

“Obviously if you are part of an organisation for a very long time, you are responsible for building that business to a level of success,” says Polisano. “And in any business when individuals like us leave, it’s news within that industry. And it was news. And there were clearly some issues and some controversy surrounding the split.”

That’s an understatement. In May 2009, the breakaway five made an unofficial offer to purchase KPF’s London office, which was turned down. After weeks of legal wrangling, they left. When Building talked to Kohn in April, he implied that Polisano’s initial description of the split as “an amicable separation agreement” was generous. Kohn said: ’They wanted to take all the contracts and all the staff and leave just the name behind. But after nine weeks of work by very expensive lawyers, we ended up in agreement and they left on
15 September. I haven’t spoken to them since.”

Much of Kohn’s version of events focuses on Polisano’s “top-down style” of leadership, something Kohn felt “held everyone back”; he said he preferred a flatter, “truncated” structure. Before Polisano can say whether he is bothered by this assessment, Leventhal jumps in: “I have something to say on that. We’re all about collaboration and working together and always have been.

If you’ve heard anything else other than it’s always been open and collaborative, it didn’t happen before and it doesn’t happen now.”
Equally determined to defend Polisano, Bakker jumps in with: “The ’top’ when we were in KPF in London was about 100 people. It certainly wasn’t a case of just one person at the helm leading everyone else.”

Polisano says: “One of the things that is important for me is to create opportunities for individuals within a firm and that requires a certain attitude about how you promote other people. So I think if that sometimes has to be top-down then that’s okay. It allows a lot of people to do big things.”

On Kohn’s move to London the trio are diplomatic. “He told me he always wanted to live in London,” says Polisano. “So, you know …” “We’re thrilled for him,” says Leventhal, succinctly finishing Polisano’s sentence.

But while the PLP partners are careful not to criticise their former boss, Polisano does point out the differences between a firm run by people who have been based in London for a long time, and one run by someone who has parachuted in. “London has been our home for many years. This is where we live and where some of us have raised our families. When we started PLP I think people recognised that the difference with us is that we’re remaining in a place where we have been for 20 years or more. We’re a British company now. This is the base from where we operate and it’s hard to compare that to a larger corporate entity.”

Leventhal adds that it is the directors’ London roots that allow PLP to go down the more autonomous design route they never felt was possible while they were part of KPF: “We’ve developed a European sensibility and that’s one of the reasons we grew apart from our American colleagues. The difference was an artistic and sensibility difference. There is a huge difference between UK and US design.”

And finally, any thoughts on one of Kohn’s more barbed comments in his Building interview, which was: “I wish PLP luck. And there are no hard feelings. And I am sure they will do well and they will do good work. But we’ll be better, a lot better. We’re the toughest firm to beat here.” All three men laugh in a way that suggests that they wouldn’t expect anything less from Kohn: “What do we think? Really? Well we think that’s great for him,” says Leventhal with a broad smile. “We’re pleased.”

“And we’re not in competition with KPF,” adds Polisano. “Even if they are with us. We’re enjoying the place we’re in right now. When you’re with someone and you break up with them - whether it’s in a marriage or a business - at some point at least one half of the relationship has to move on, which I think we’re doing. It gets more and more difficult to look back because we’re so excited about the future.”

Speaking of which …
And that future is what the partners hope the industry will focus on, rather than the firm’s explosive entrance into the architectural world. The firm has retained some high-profile schemes in the Middle East, including the Four Seasons hotel at Sowwah Island in the UAE, for Mubadala, the Abu Dhabi government’s own investment vehicle, and it is advising on Abu Dhabi airport on its Midfield terminal complex.

In the UK, it is working with Gerald Ronson’s Heron Group on the Four Seasons hotel that will be erected beside the Heron Tower and has teamed up with HOK to tackle the UK Centre for Medical Research and Innovation in London. The clients for that job are Cancer Research UK, the Medical Research Council, the Wellcome Trust and University College London. They hope that the finished facility will become the UK’s foremost biomedical research centre.

And of course, no list of blue chip employers would be complete without Grosvenor Estates, for which it is designing the Bond Street Crossrail station (it’s also handling the design of the Farringdon station with Scott Wilson).

Although the partners are quick to emphasise that they want to be known as a British firm, the UK accounts for only a half of their revenue. They also have schemes in Paris, Frankfurt and Amsterdam among other European cities, they have a strong presence in the Middle East and have just won two urban planning projects in Brazil. The firm is also looking to India, China and Iraq.

Bakker adds they will aim to keep the workload split the same so UK staff can gain experience of the sharp end. “We want people working in our office here to be going onto sites and seeing how things are going. It’s better for their development. They can’t really do that in international projects so we try to maintain the equal split.”

And the firm is looking to grow - very slowly - to cope with the workload. “We would like to hire people that we could make part of the group on a permanent basis and so we’re conservative about who we take on,” says Polisano. “We get 300 CVs a week so it’s really an organic thing. We are always keeping an eye out for good people and that’s one of the great, and also unfortunate, things about the current market today: there are a lot of talented people who can’t find work. It’s very unfortunate for them but it’s a good thing for us.”

And as for what the industry can expect from PLP, Polisano hopes it will get better and better. And, if the staff sitting in the open-plan office are anything to go by, trendier and trendier: “Are they really that trendy?” says Polisano. “But it’s so early in the morning.” Well, perhaps they’re responding to the Camden grunge-chic vibe. And for a firm that wants to prove it is representative of the UK’s capital, there is nothing more London than that.