It’s a big-stakes game for construction this week, with large donations to politicos and whole countries being flogged off. Meanwhile, Building itself pulls off a mass deception

Losing almost £900,000 in the year to July 2010, the Candy brothers naturally tightened their belts and cut their donations to charity from £34,318 to £9,500 last year. In difficult times, it makes sense to be frugal and look after number one. But they still found it in their hearts to give £60,000 to another needy institution … the Conservative Party, having given nothing at all in 2009. Coincidentally, the donation was about the same amount as the average salary at the company - where staff numbers shrank from 110 to 93 over the year. The donation is big enough to get the Candys into the Tory Leader’s Group, where they can meet the prime minister. Let’s hope the conversation is worth it.

Building supplies Leviathan, Wolseley, ran rings round the nation state last October when it moved its corporate HQ from the UK to Switzerland to save a shedload of tax. And last week we seemed to inch closer to a Blade Runner-style corporate-dominated dystopia when the firm announced it had “completed the disposal of Italy” in its
half year results. Closer reading, however, reveals that the materials giant was not selling entire countries, but its Italian heating and plumbing business. After all, who would want to buy Italy? Two-for-one with Greece?

Of the coalition’s many new ideas, the Big Society has proved one of the easiest to lampoon. So found communities minister Andrew Stunnell, at the launch of a report by a UK Green Building Council task group calling for, among other things, a new technical body to support the extension of DECs. In a not-too-subtle bid for cash, Dr Hywel Davies, one of the authors, told Stunnell that “so far it’s been a kind of Big Society report.” Perhaps visualising the charred remains of all the quangos so recently thrown on the bonfire, the minister smiled, and looked at the ceiling.

Sad news for fans of garish, oversized screens. A mooted plan to fit St Giles Circus in London with a “digital skin” - like the brash Piccadilly Circus - is no longer being considered. An insider had suggested the plans were on the table, but the client in question was at pains to quash the claim. The multi-billion pound redevelopment of the area around Tottenham Court Road station will be sadly lacking outsized illuminations.

Let it not be said that directors fail to understand the problems facing workers on site. Robin Wood, group managing director at Keltbray, took on the menace of materials theft head on early in his career. Legend has it that when he noticed someone stealing scrap metal from a tip alongside his site, quick-thinking Wood jumped into the nearest dumper truck and chased the thief down. John Price, Wood’s joint group managing director, recalled watching a similar incident at a site he had worked on in Nottingham. Clearly not a company to delay payments to.

It was a particularly subtle April Fool, but some of you may have guessed that yes, our story about builders having to scrub up and wear Wills and Kate hard hats on the day of the royal nuptials was indeed less than true. This didn’t stop one rather credulous website, Builders in Bath, picking it up and apparently swallowing it whole. Still, what do they say about imitation being the best form of flattery? 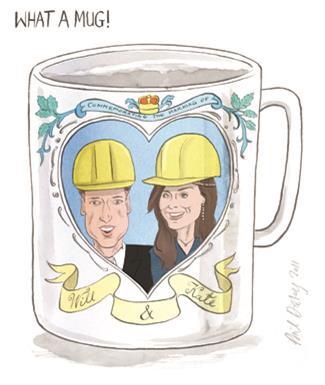