Lord Sugar fires one of our own, primary school kids are in charge of site safety and the happy royal couple appear to have the extraordinary ability to duplicate themselves in exotic locations

In February I cast a rather sceptical eye over a report that claimed local government could save £7bn by managing its property better - sponsored by Interserve, a company willing and able to help them … for money. Well, the PR team at Interserve has won again: the outsourcer has “discovered” that 40% of local authorities don’t have proper plans in place to deal with impending budget cuts. Troubled by the findings, chief executive Adrian Ringrose thinks that the “future is going to be defined by partnerships between the public, private and third sectors working together”. What a helpful guy.

They think it’s all over

Alas, Ellie Reed, construction’s representative on The Apprentice, has been shown the finger by Lord Sugar. The director of recruitment firm A&E construction was fired last week for being - in Lord Sugar’s eyes - largely anonymous. A little harsh we thought. Ellie had always been one to call things as they are, remarking at least once that her teammates efforts were “bollocks”. In an interview on The Apprentice’s after-show “You’re Fired” Reed said the job hadn’t been for her. It was easier to deal with bolshy builders than media-savvy business fanatics, she concluded.

Through the eyes of a child

What would site-safety posters look like if they were designed by kids? I hear you ask. Well, speculate no longer: the National Federation of Builders has run its yearly competition for primary school children to see how they would warn people of the hazards on construction sites. However, this year the NFB has advised schools to calm their entrants down after receiving a wide array of horrifying entries, featuring a disproportionate number of detached limbs and one that bleakly read: “Don’t Die”. If you think you could design something that passes for the work of a child, or know any budding artists, applicants have until 17 June to enter.

One of my spies was recently dispatched on a mission to investigate Brazil’s infrastructure market.

It was not the extreme friendliness of almost every single Brazilian that caught his attention, nor the fact that on more than one occasion a contact had forgotten about the meeting and turned up more than fashionably late, if at all, nor the monkeys scampering along the street. The prevailing and most exotic memory of his trip, in fact, was walking into the British Consulate in Rio de Janeiro and seeing life size cardboard cut out figures of Wills and Kate in a happy embrace. Exactly the image that will win us work on Rio 2016.

Peter Rees, planning officer for the City of London, has made no secret of his joy at seeing Canary Wharf Group stick its flag in the square mile. The developer has started construction on its first scheme in the City - the Walkie Talkie tower, as a joint venture with Land Securities. Rees and Canary Wharf boss George Iacobescu spent much of the nineties at loggerheads, as the two London locations competed to house various finance firms. Rees told one of my hacks: “I knew they’d see sense in the end! It was novel seeing George be nice to me when Fenchurch Street was on the table.”

Does Labour lack a coherent strategy in opposition? When it comes to construction, the answer appears to be yes. Two weeks ago, the party informed one of my spies that Chuka Umunna would be taking over from Gordon Banks, who had resigned as shadow minister for the sector two weeks earlier. Last week, however, Umunna’s office clarified that Ian Lucas, rather than Umunna, will be shadowing the industry’s current man in government, Mark Prisk. When we tried to check this, Lucas’ office was only able to confirm for sure this week. Seeing as it’s only taken a month to switch shadow ministers, Labour policies for the industry shouldn’t be with us much later than, say, 2014. 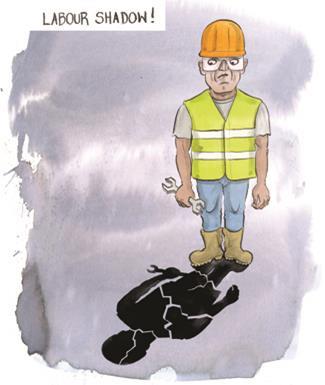