Hard to know who to feel most sorry for this week – the boss barred from using his own phone, the manager terrified out of a pub – or the high-rollers who missed out on the Sunday Times rich list

Zaha Hadid made a dramatic appearance - as if she ever makes any other kind - in the Sunday Times rich list this year, clocking up a cool £37m. Still, it didn’t even get her into the top 1,000. Construction’s highest roller was … Shwan Al-Mulla, a London-based Iraqi Kurd, whose work rebuilding Iraq has helped him pocket £500m, which puts him 151st on the list. Redrow’s Steve Morgan was £50m richer this year, taking his total pile to £400m, while Doyle Group chairman, Stef Stefanou’s joint stash with brother Stelio was up £15m to £140m. Construction is the poor relation of property however, managing just 39 in the list compared to 198. It could have been a bigger rout if the Candys had featured, though. They refused to cooperate because of less than favourable coverage in the paper, the Telegraph reported.

What does it take to prise a chief executive from their Blackberry? A national grid meltdown? A hatchet? The wife of ECA chief executive Steve Bratt thinks she has come up with an answer. When the Bratts go away on holiday, she locks her husband’s phone in a safe and withholds the combination from him. Liberated, Bratt tells one of my hacks he uses some of his free time to encourage his children into rock music. “It may be a case of a parent living their dreams through their kids,” the once-aspiring drummer says ruefully.

From construction to destruction

All this publicity comes in the week following the demise of what was arguably the industry’s most infamous son: Osama bin Laden. The world’s most wanted man was the son of Yemen-born Mohammed bin Laden, who worked his way up to become a wealthy construction magnate and reportedly built 80% of Saudi Arabia’s roads. Bin Laden studied civil engineering, and inherited a small fortune after his father was killed in a helicopter crash in 1968.

Stephen Tagg, director of management services at Gleeds, has been prepared by his extensive life experience to work on the BBC’s new Broadcasting House. During a visit to Belfast in the eighties, Tagg befriended a local in a pub. After a brief chat the atmosphere darkened when the Ulsterman said he owned two rocket launchers to use “when required” in the service of the IRA. Tagg managed to end the conversation before quickly leaving the bar. According to Tagg, this was only slightly less frightening than having to work with the BBC.

Happy seventh birthday Make. It may seem a tad unimaginative to hold your bash in your professional federation’s offices. But when that federation is the RIBA on London’s plush thoroughfare of Portland Place, you can be forgiven. The guests swept up the grand staircase into the main hall to be greeted by developers, engineers, consultants and planners - a who’s who of people cosying up to the Broadgate and Cube architects. My hack enjoyed the nibbles, but couldn’t understand why so many declined the mini-burgers, a disproportionate number of vegetarians in the crowd perhaps?

Despite losing out to property in the rich list, the industry has a new representative. Ellie Reed, 33, is the managing director of the unfortunately named A&E Construction, a recruitment company based in Yorkshire, and is a contestant on the new series of The Apprentice. Reed set up the business “when asked to open a new office [for a previous company] without a pay rise”. Another on her list of accomplishments is that she chased a burgler out of her house, aged 17. Clearly not someone to be messed with - she might even put you in A&E. 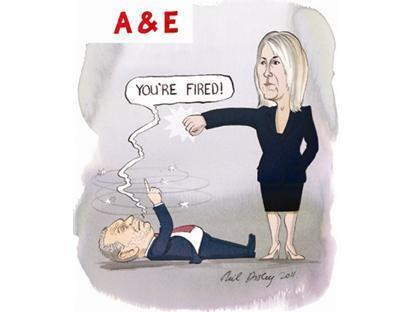