This week’s theme is ’caution’. From a cash-happy economist, to pillow-throwing protestors, to the RICS’ attempts to cash in on water, my advice is: count to 10 before making hasty decisions

Noble Francis, economics director at the Construction Products Association, normally has a good head for numbers. But after perhaps just a few too many glasses of champagne at an industry bash last year, a blind auction of prints by Picasso caught his attention. Bidding while under the influence is risky at the best of times and he was shocked to discover a few days later that his bid on one of the prints had been successful. After getting over the initial surprise, his wallet was considerably lighter and living room wall much brighter.

The only way is East London

It seems like the east London borough of Walthamstow, hitherto best known for producing pop sensation East 17, has become something of a hotbed for anti-development activity. Before Christmas, consultation events for the planned redevelopment of the Walthamstow dog track were cancelled as (allegedly) staff feared for their safety. The latest weapon from the protesters is altogether more formidable: an organised pillow fight to protest against a proposed 14-storey hotel tower next to the station. The developer, Solum Regeneration, better be careful. It might not be pillows next time …

After awful floods devastated Brisbane, the residents must now go about the task of patching up their city. It is perhaps ironic, therefore, for the RICS to call for water to be given a monetary value, because: “Population growth and burgeoning levels of food production mean that the world’s water resources are becoming increasingly valuable”. This is undoubtedly true, but this isn’t quite the week when a lack of water has been the problem. 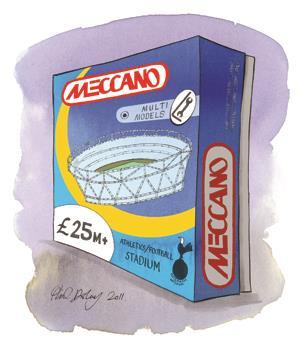 Whatever your views on the popularity of athletics, Spurs’ plan to dismantle the Olympic stadium like a giant Meccano set will come as a bit of a blow to the industry’s pride. Particularly galling is Tottenham FC’s rather token £25m offer to redevelop the athletics facilities at Crystal Palace stadium. After Wembley, it seems nigh on impossible to estimate how much stadiums cost to build. But would anyone honestly argue that the Olympic stadium would have cost just £25m less had it not needed to cater for track and field? A higher offer, please.

Our story featuring the best pictures from Building’s Flickr group ended up being our most read (or looked at) article of the year. Ian Bramham’s picture of the Imperial War Museum got almost 1,800 votes, while Paul Galbraith’s picture of the Berlin TV Tower attracted 1,200 thumbs up. Our data shows that over 1,000 people from the Nikon DSLR Flickr group had responded to Ian’s call to vote. While not wanting to take anything away from Ian and Paul’s brilliant images, we want to reassure the other shortlisted photographers that a low number of votes is less a reflection of their photographic ability and more a commentary on their limited number of online friends.

If you struggled to travel through the snow and ice this winter, spare a thought for the cyclists training for this year’s Cycle 2 Cannes (C2C) charity bike ride. They’ve had to face horrendous conditions to get fit for the start of the six-day charity ride in March. According to my man in the peleton there have been plenty of “Bambi on ice” moments but no broken bones. This year the organisers are hoping to raise £200,000 for charity and exceed £1m for the total amount raised on C2C rides. As an extra incentive, Studio Four Four’s - and former winner of Building’s Track Day - Justin Lomas is offering “at least” an iPod for the rider who raises the millionth pound. Generous.

To support C2C or ride the route go to www.cycle2cannes.org