I am grateful to David Scott of McGrigors for drawing this Scottish adjudication case to my attention. It is one of those instances when the Scottish court has looked at what the English courts have done and said we will do the same. It deals with the tricky question of enforcing the adjudicator’s decision when there are real signs that, if the adjudicator’s headlong dash eventually proves wrong, the money paid is unlikely be recovered.

If there was merely a significant risk of non-repayment, the English courts ask awkward questions: Like was the ’winner’ in a poor financial position when the two parties agreed to contract?

Pihl UK is a construction company making strides hereabouts. Although it has been working in the UK for only three years, it is part of the global Danish enterprise Pihl & Son, and ranks 97th in the world’s largest 250 construction companies. I wonder what it makes of our 28-day adjudication system? It got a taster of it on a school rebuilding and refurbishing programme for Aberdeen council; or rather in the matter of a subcontract with Integrated Building Services Engineering Consultants, trading as Operon.

Though no fault of Pihl or Operon, the school jobs suffered a hiccup. The funder was just up the road from Aberdeen; it was the Icelandic bank Landesbanki, which went into administration. That meant delays on the work and claims for consequent loss and expense from Operon. Interestingly, to cover for all this, Pihl placed £1m in an escrow account at Royal Bank of Scotland.

So the work recommenced. The deal with Operon was that Pihl would pay £500,000 on completion. That was last October. But by then Pihl had issued four withholding notices for cash otherwise due. Operon complained and called for an adjudicator. He ordered Pihl to pay up.

By now Pihl was fretting about the accuracy of the decision and the likelihood of getting repaid once a court got to grips with its claim against Operon. By the way, it is no criticism of any adjudicator to suggest they have not got things right. The 28-day process is not intended to be the deep analytical marathon that is litigation. Speed gives way to accuracy. So Pihl’s worries had merit. Just how much merit became apparent in January, when Natwest Bank appointed an administrator to take over Operon. Pihl said that amounted to insolvency and refused to pay. 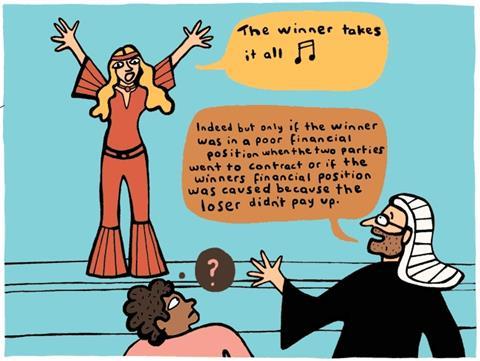 Operon said the Construction Act required the prompt enforcement of a decision. This UK-wide act addresses the mischief of the wrongful withholding of funds, and that’s what the adjudicator dealt with. Operon was not being liquidated, and although the claim that it was insolvent could be run in the adjudication, it couldn’t be run afterwards.

Pihl replied that the Construction Act proceeded on the basis that both parties were solvent. It decided who should hold the money pending a final resolution. Insolvency defeated the intentions of the machinery.

The judge looked to England and Wales, where a court will not enforce a decision if the “winner” is insolvent. Rather, it is resolved in the liquidation, when both parties’ overall claims are merged to give a net balance. Other circumstances were more subjective. If there was merely a significant risk of non-repayment, the English courts ask awkward questions: was the “winner” in a poor financial position when the two parties agreed to contract? Was or is the “winner’s” financial position caused or contributed to because the loser didn’t pay up? If the answer is yes to either, then the loser has to pay. But in Scotland, allegations of insolvency were said to be no defence against enforcement.

This judge considered all the cases over the years and decided that it was unfair to enforce an adjudicator’s decision once an administrator had been appointed. As to other allegations of insolvency raised at enforcement, the court recognised that adjudication does not allow the parties to present their positions in full. It is a cash flow process. A repayment is always possible. However, the court will police a party’s behaviour to prevent the withholding of sums at enforcement, thus engineering the insolvency of the contractor.

And in this case, the judge was persuaded that Pihl could invoke the principle of balancing accounts as a defence to enforcing the adjudicator’s decision. No enforcement.