The London 2012 Aquatics Centre: Star of the show? 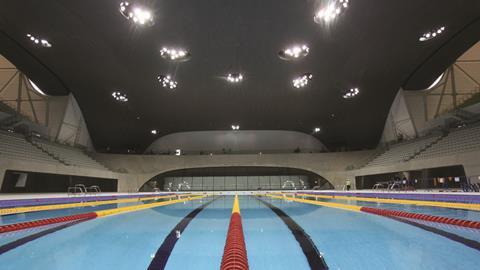 The London 2012 Aquatics Centre, arguably the most eagerly anticipated venue on the Olympic Park is finally complete. For a Games that has conspicuously prioritised legacy over architectural extravagance, Zaha Hadid’s £269m Aquatics Centre was originally pitched as the star of the show, the sole venue that could live up to the kind of visionary spectacle we saw at Beijing in 2004. Does it live up to the hype?

Internally, there is no question that it does. The main auditorium is truly spectacular, a swirling cavern of curved timber and flowing, beautifully honed concrete. The bulging roof, with its soffit clad in silver finished pre-weathered timber strips, rises from only three points on the concrete podium below before swooping voluptuously into the space above. Along its incredible 120m unsupported span, its dips only momentarily to subtly reflect the division between the two pools that inhabit the main arena, the competition and smaller diving pool.

A third training pool is concealed under the entrance and three diving boards, elegantly cast in compacted in-situ concrete and jazzily trimmed with chrome steel steps, adorn the far end of the arena. This is a stunning space all the more so as it exerts its power through purity. It is a triumph of the sculptural fluidity and visceral conceptualism that Hadid does best, with the roof instantly recalling both the dynamic motion of a wave and the corpulent belly of a grounded whale.

The Aquatics Centre’s problems are outside. While the roof retains its sculptural dynamism and pleasingly exhibits the same silver timber soffits evident internally, the building is fatally compromised by the addition of the now notorious temporary stands on either side. Hadid emphatically maintains that these were a part of the brief when she was appointed onto the project, although she concedes that changes to the location, size and cost of the project led to the configuration we see today. Rightly, she also points out that that the long-term feasibility of the facility could only be secured by designing a building that could be adapted from Olympic mode (17,500 capacity) to legacy mode (5,000 when the stands will be removed).

Nevertheless architecturally, the stands retain as much aesthetic integrity as adding steel toe-caps to ballet slippers. They corrupt the sculptural purity of the flowing roof and create a massing composition that seems clumsy and ill-conceived. Yes, thankfully the stands are only temporary. But for as long they remain in place, so too will the Velodrome’s position as the architectural star of 2012.