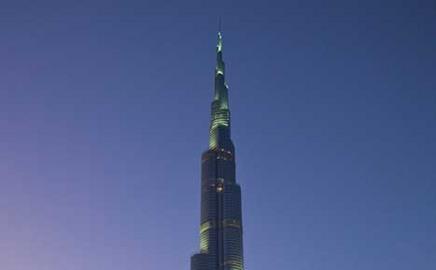 My wonder is the Burj Khalifa tower in Dubai. I’ve stood on 124th floor, on the observation platform, and from there everything seemed so small in comparison – even the bigger towers. From afar the Khalifa seemed like just another expansive emirate building and I wasn’t so sure about it, but up close you can truly feel what an achievement it is.

I wasn’t expecting to be so impressed. It’s an awesome feat of engineering. I went up in the lift, at a speed of about 10m/s, and my ears popped twice.

Once on the observation platform, we looked out over Dubai as the sun was setting and witnessed the most fantastic sunset: on the ground everything was in darkness, though up on the platform it was still light. The top of the tower seemed above the horizon, if that’s possible. It was a pretty cool sight to behold, just looking down on the night.

It’s the Khalifa’s remarkable view that gives you a true appreciation of what has been achieved here. Because of the emirate’s recent troubles, I think people forget exactly was has been accomplished with its buildings.

My blunder is the Hyde Park barracks. It’s a three-storey block built in the sixties and completed a decade later. Perhaps it was deemed “modern” at the time, but it is now hideously outdated. It’s not in keeping with its surroundings and, as a result, it looks as though it’s lost its way. Like the Burj, you can see the barracks from all around: although unlike the Burj, they impose themselves on every inch of their surroundings. Though the similarities end there, a comparison of the two buildings perhaps helps to underline just how far technology has come on since the sixties. Hyde Park barracks are a pretty grim vision of concrete and brick.

WonderBurj Khalifa is the tallest man-made structure ever built, at 828m. Construction began in September 2004, with the exterior of the structure completed on 1 October 2009. The building is part of the 2km2 flagship development called Downtown Burj Khalifa, near Dubai’s main business district. The tower’s architecture and engineering were carried out by Skidmore Owings and Merrill. Adrian Smith was the chief architect. The total cost for the project was about £1bn. The price of office space this time last year had reached £27,000 per m2.

Hyde Park Barracks in Knightsbridge, central London, is the base for the Household Cavalry Mounted Regiment, which carries out mounted ceremonial duties on state and royal occasions in London. The present buildings were designed by Sir Basil Spence, and completed in 1970. They were built to accommodate about 80 officers, 431 rank and file and 273 horses.