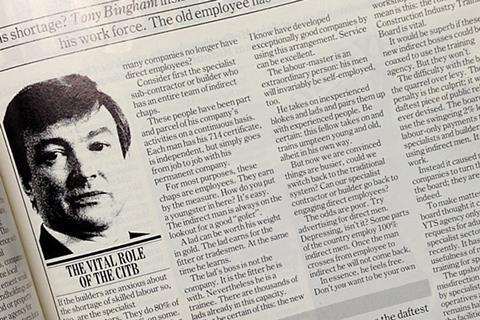 This is the 25th year that Building columnist Tony Bingham has written for the magazine. Below is an extract from his 3 April 1987 debut, entitled ‘The vital role of the CITB’, in which he examined how the CITB could help train an increasingly casual labour-force:

“Like the builder with these indirect men, the specialist contractor faces a new problem.

It is this: he is no longer master of his workforce. The old employee has become his own master. Further, it is this new boss who decides whether to employ more people and engage new apprentices (but this might be too sweeping in all cases.

There are now a massive 500,000 indirect labour-only operatives. It’s growing, too. Don’t get sidetracked by the wailing and beating of breasts over the position.

No. Concentrate on the objective. How do we increase labour now and can we stimulate more apprentice training? And how do we do this, given that many companies no longer have direct employees?

Consider first the specialist sub-contractor or build who has an entire team of indirect chaps.

These people have been part and parcel of his company’s activities on a continuous basis. Each man has his 714 certificate, is independent, but simply goes from job to job with his permanent company.

For most purposes, these chaps are employees. They earn by the measure. How do you put a youngster in here? It’s easy. The indirect man is always on the lookout for a good “gofer”.

A lad can be worth his weight in gold. The lad earns for the fitter or tradesman. At the same time he learns.

The lad’s boss is not the company. It is the fitter he is with. Nevertheless he is a trainee. There are thousands of lads laready in this capacity.”

Remembering this column 25 years on Tony says: “The CITB in those days was being suckered. It was a vehicle for the anti Labour Only Subcontractor brigade. Any builder who engaged a labour only bricklayer/carpenter and more was despised and had to pay 2% levy on what he paid his labour only man. There was a hell of a row about this because it worked out about 10 times the annual levy than if he engaged the same bricky as an employee. Worse, he couldn’t send any self employed person to be trained at CITB. The result was that the industry set its face at the CITB.

“Come 1999 in the High Court leave was given to challenge the legality of this manipulative levy. The High Court was told that the LOSC penal distinction would stop next year. It didn’t. And do you know, it still applies save that silly old CITB [now CITB-ConstructionSkills] reduced the 2% to 1.5%. If the High Court had been asked to decide whether this penal levy set construction firms against CITB I have no doubt that the resounding answer all these years later is YES. Come on CITB wake up. Some might still say you are being suckered. I just think you are silly.”