The industry has gone all childish this week, as a nine-year-old bags an interview with a celebrity, the RICS sings Jungle Book songs and a famous architect gets as excited as a teenager on a first date

Though her dad may be a G&T man, Miles Delap’s nine-year-old daughter knows that rum is a far better bribing tool when dealing with a pirate. Delap, who is a partner at consultant Gardiner & Theobald, was amazed when his daughter, Beatrice, managed to persuade Johnny Depp to visit her school in Greenwich (dressed in full costume) as he filmed scenes for Pirates of the Caribbean nearby. You may have read about Mr Depp’s school visit back in October and here is how it was done. Beatrice wrote to Captain Jack Sparrow asking for help to stage a mutiny against teachers, promising “a plentiful supply of rum” in return. She handed the note to a security guard on set and it made its way around the crew before reaching Depp. A few days later the school received a call saying Johnny Depp would be arriving in 10 minutes. Then Beatrice interviewed him.” Now there’s a girl who knows how to get what she - and pretty much every other girl in the whole world - wants.

Female readers (and no doubt some of their male counterparts) will be all too aware of the perils of footwear choices when attending awards functions. The five inch heels that seem perfectly feasible when sat indulging in a three-course meal become much less appealing when you triumph and feel the need to celebrate by throwing some dubious shapes with colleagues. So spare a thought for those women at the British Council for School Environments bash last week, who hadn’t realised the awards presentation was a stand up affair. One prize winner, presumably surprised by her victory and caught trying to get some respite, arrived shoeless on stage before hurriedly redressing the matter in time for the photograph. Quite a feet.

Too much to bear

Last week’s Lord Mayor’s Property and Construction dinner at Mansion House had all the usual pomp and circumstance but extra significance for us, given that the post is this year occupied by an engineer - head of regeneration at Hammerson, Mike Bear. However, the RICS Singers - a choir made up of RICS members - did their best to undermine any solemnity at the event with a selection of songs inspired by the not at all grizzly Mayor Bear. Starting with Teddy Bear’s picnic, they also sang Bear Necessities from the Jungle Book. Unfortunately they stopped there, missing the chance to regale the diners with their rendition of Elvis’ (Let me be your) Teddy Bear or the Alan Price Set’s Simon Smith and his Amazing Dancing Bear. Care to chip in?

Adorning the front page of Building is a privilege sought by many but realised by few. Last week Ken Shuttleworth joined an elite group of individuals whose portraits have graced Building’s front cover. The enormity of the honour was clearly not lost on Shuttleworth who took to Twitter to pronounce his excitement. “OMG on front cover of Building!” tweeted the man behind the Gherkin. Shuttleworth’s excitement does not extend to London skyscrapers - of which he is openly critical. One presumes we won’t be seeing any giddy tweets about the Shard then. LOL!

Down with the kids

If anyone at Glastonbury last weekend spotted a silver-haired gentleman weaving in and around the bars, tents and stages in a kaftan and a pair of heart-shaped sunglasses, chances are it was none other than the Construction Products Association’s Simon Storer. The communications director told me ahead of his trip to the world of wellies that he fully intended to blend in at the event by donning some sort of “outrageous” outfit. “I am an old rocker,” he said. “I was rocking back when Dylan and Clapton played in 1978.” I can’t help but think that over 30 years on, the kaftan may be more of a “stand out” rather than a “blend in” look. But hey, anything goes at Glasto. 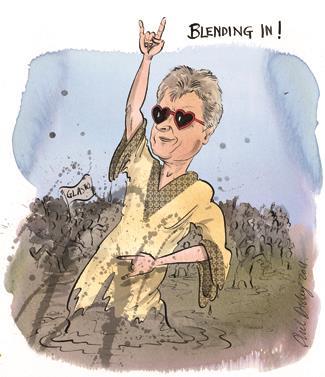