Hansom: It's all relative

Positions are made clear this week, as a producer defends his august ancestor, doctors are sent to the bottom of the ladder, and a new book lifts the lid on architects’ romantic antics

I was interested this week to see my contemporary, the legendary Victorian civil engineer Joseph Bazalgette, invoked in an effort to bolster support for the Thames Tideway Tunnel.
Peter Bazalgette, the controversial TV producer and great-great grandson of Joseph, poured scorn on the London councils attacking the proposed £3.6bn megaproject and said that the scheme should go ahead in the spirit of his ancestor.

“In 1858, [Sir Joseph] cut free from the squabbling of London’s local councils to provide a sewage solution for the entire city, which has lasted 150 years,” he wrote in a letter to the FT.

“Be bold and build the Thames tunnel for the next 150 years. It’s a great idea that will benefit both London’s economy and ecology.”

Rapid changes to the NHS estate seem to be having unintended consequences. Money savings come largely from rationalising space in buildings - and one hospital, which will remain nameless, has taken a particularly ingenious approach. A door along one of its corridors apparently now bears the sign “STATIONERY (and junior doctors)”. What tickles me about this - apart from the bizarre pairing of medics with staplers and printer cartridges - is the implication that office supplies come higher up the pecking order than qualified medical professionals. To downtrodden junior doctors, of course, this may come as no surprise at all.

Give it another spin

Lend Lease’s public image in the UK is facing an important test at the moment, with the industry still getting used to the Australian developer dropping the age-old Bovis brand from its construction business. So it’s timely that the firm is about to freshen up its PR team, with the appointment of Dan Bridgett as head of corporate affairs across Europe, the Middle East and Africa. Bridgett has an interesting history in the field: he endured a brief stint as the spin man for Multiplex when the contractor was fighting to restore its reputation after failing to complete Wembley stadium on time for the 2006 FA cup final.

When Bridgett was appointed that autumn, his task was compared by the Guardian’s sports blog to the difficulty of “becoming Saddam Hussein’s defence lawyer.” His next move - joining Barratt a few months before the housing market collapsed - was also hardly an easy ride. Let’s hope there are better things in store this time around …

Following my observation last week that there is more than a passing resemblance between the chief executive of Dutch consultant Arcadis and Hollywood actor Donald Sutherland, I am on the search for more lookalikes.

Does your boss have a celebrity twin or is the colleague down the corridor the spitting image of somebody famous? Send your “separated-at-birth” nominations - including photos - to hansom@ubm.com or by Twitter via @JosephHansom.

Hats off this week to commentator and New London Architecture chairman Peter Murray, who is just about to publish his first novel, A Passion to Build. The book - a work of fiction, I am keen to point out - follows the “meteoric careers and tangled love lives” of two leading architects who work in practice together before splitting up and becoming competitors. The story has them vying to win the “Frazer prize” and to design stadiums for the forthcoming “Eurogames”. This may be a bonkbuster but Murray has done his research and advance copies have been sent to a handful of the country’s leading architects and to at least one senior figure behind the 2012 Olympics, in an effort to ensure it is as plausible as possible.

Ask Santa for a copy in your Christmas stocking! 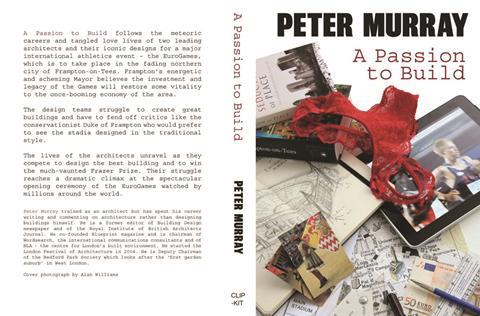