Now the sun’s out, everyone’s up for a good time, whether it’s a Wild Sex Party, a boat party, or John Dodds’ one-man, one-vote Lie Around In The Sun All Summer Party

News last week of consultant EC Harris’ plans to float itself when the market improves may have come as a surprise to some of the top brass at rival Turner & Townsend. A long-standing rumour, vehemently denied by EC Harris, has it that the consultant offered itself for a potential merger earlier in the year, only to be turned down because T&T had its own flotation plans. Surely it couldn’t be that ECH is only looking to the stock market having exhausted plans for a merger on its own terms … could it?

WSP’s house band is receiving a growing amount of attention within the industry, partly because of the novelty of a band of engineers actually being quite good, but probably also due in part to its name, Wild Sex Party. However, any hopes the bandmates may be harbouring of such wild nights on tour have probably been thwarted by their new outfits. Taking to the stage at a WSP bash last week, the lads and ladies were adorned in bright blue T-shirts featuring a large ice cream and the words “Urban Cool”. We might be wrong, but we’re not sure they’re showing our would-be rock stars in their most alluring light …

Trunks, bunks but not sunk

I enjoy nothing more than messing about on boats during the summer months and the annual Dragonboat challenge in London gave me the opportunity to offer Building crew mates the benefits of my oarsmanship. There was as much fun on the quayside as in the water, with supporters in fancy dress shouting themselves hoarse during every race. As ever, there was a healthy array of amusing team names and kit. Speedos R Us caught my eye, as did the T-shirts sported by the Construction Products Association crew: “Skiving for Charity,” they proclaimed. And indeed they were. Over £11,000 was raised for charity Crash from entry fees alone - well worth a day out of the office. 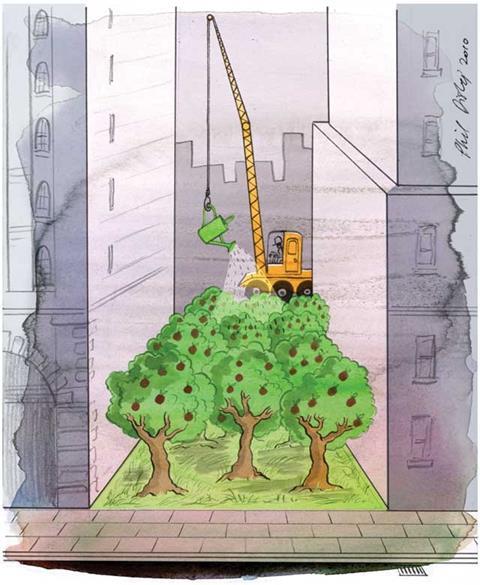 One of the great blights of recession is the number of vacant sites strung across our towns and cities. These sad spaces often turn into rubbish-strewn eyesores long before the developers raise the funds to get work restarted. With this in mind, I was particularly heartened to see a site in Southwark turned into a bountiful orchard as part of the London Festival of Architecture. The site is owned by former CZWG partner Roger Zogolovitch and he told me he hoped the venture would encourage other developers to do something positive with their sites. We agree and are backing Property Week’s Sitelife competition to turn an empty lot in Manchester into a vibrant community space. Visit www.propertyweek.com for details.

Oddly, enough, yet more T-shirt related news reaches me. My colleague bumped into former Kier boss John Dodds recently. Having last seen him at the Building Awards, where the retiree said he was looking to “put something back into the industry”, I asked for an update. “Well,” he said, “I was sitting in my garden in the sunshine this morning in my shorts and T-shirt, and I thought, maybe give it a few more months …”

When bidding for a Crossrail contract, at least one consultant - who for these purposes will have to remain unnamed - used professional actors to train its staff in pitching skills. One trick the actor advised, in the face of nerves, was to walk straight in, smile and steadily look the panel in the eyes. The result, he claimed, was that you’d realise, “They’re not as bad as I thought,” and would suddenly feel OK.

How helpful this advice proved is doubtful, however. Looking forward to conquering her nerves with the technique, one member of the team marched in smiling, looked the interview panel in the eyes - and thought: “That actor bloody lied to us …”