This week, specialists decide to communicate in Klingon, nappies are turned into roof tiles and someone promotes an ascent by absailing down a skyscraper. Is anyone else confused?

Man up and go to Libya

As readers will know, British Expertise chief executive Graham Hand told Building that official advice not to travel to the country was preventing firms from winning work, a point of view that appears to have surprised the equally outspoken Gummer, now a member of the House of Lords.

“I think the FCO should be more adventurous but what kind of wet businessman is it who waits for an all clear from the UK government?” the Tory peer responded scornfully. “He who risks wins!”

Going up or down?

Del Hossain, the managing director of architectural recruitment firm Adrem, was planning to abseil down London’s 540ft Broadgate Tower to raise money for the British Red Cross as Building went to press. In a mass email circulated to contacts, Hossain divulged that he had been inspired after being able to help someone having a seizure on a tube train thanks to attending a first aid course run by the organisation.

Not wanting to let a bit of publicity go to waste, he also mentioned that he is also launching “Ascent TM”, a “new management consultancy that focuses on developing architecture and design businesses.” Hansom applauds the good deed but surely he should be going up the building if he wants to promote the idea of “ascent”?

Do you speak Klingon?

This summer’s “silly season”, as it is known to journalists, extends beyond the national press if the Confederation of Construction Specialists’ newsletter is anything to go by. It seems that the July/August edition originally featured an article written in Star Trek speak before the “error” was spotted and the newsletter reprinted.

“Enclosed is a corrected newsletter,” a letter from the CCS stated. “The admin staff apologises for the article on page three that was translated into Klingon when scanned.”

If the Confederation does wish to broaden its intergalactic appeal in future, it need only call the Klingon Language Institute: www.kli.org

Brady vs Reed: Round 1

Last Friday night’s formal handover of the RIBA’s presidential baton from Ruth Reed to Angela Brady proved to be quite a lure for much of the industry. Unfortunately the historic occasion, the first and only time one female president has been able to hand over to another, wasn’t entirely conducted in a spirit of female solidarity with Reed unable to resist a little dig at the reported ambition of Brady to make the RIBA “cooler” with a potential “hub” further to the east of London.

“No, Angela, I wouldn’t want to move [the RIBA] to Hoxton,” she said, before admitting she had no idea where Hoxton is.

Parents of young children feeling guilty about the waste produced by their little darlings have a saviour at hand with the opening of the UK’s first nappy recycling plant. The West Bromwich facility, which will also recycle feminine hygiene and adult incontinence products, is the first of five planned by specialist firm Knowaste, which uses state-of-the-art technology to sterilise such waste and recover plastic and fibre from it. As well as dealing with a byproduct that takes 500 years to decompose, Knowaste claims its plants will save the UK 110,000 tonnes of greenhouse gas emissions a year. What is this material used for, you may ask? Construction of course, in the form of roof tiles, plastic tubes, insulation and so on. 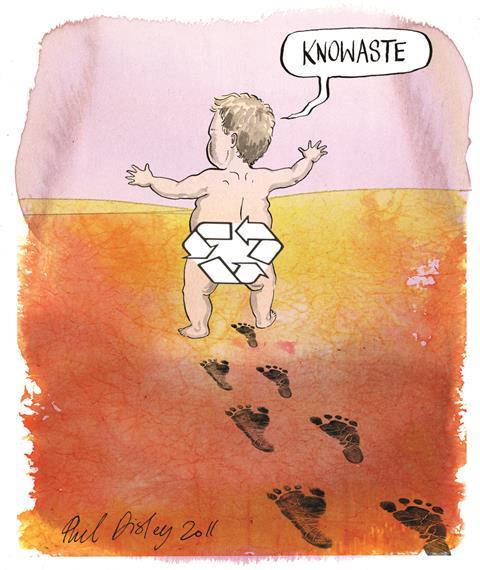