A lawyer has just won a prize for a paper that challenges the NEC evangelists. You don’t have to like it, just read it. Then you too can be the judge

The highly commended prize entry in this year’s Society of Construction Law competition is tricky. Solicitor Mike Barlow of MacRoberts, Edinburgh, won the award with his - controversial - paper, in which he says: “The NEC3 places a greater administrative burden on the parties compared with other standard forms of contract”. If instead, he had yelled “NEC3 is worse than JCT”, well he would now be languishing in the cells four floors down in the ICE. NEC folk are evangelists, disciples following a holy scripture. Pity Mike Barlow
– he is doomed, doomed.

He tried to be tactful and sensitive: “Despite the apparent benefits of NEC3, for some observers at least, it remains a controversial choice - particularly in legal circles.” Well, he is wrong. When I was in Edinburgh giving a paper to real constructor people, there were howls of derision when I said: “I know, like me, you all love NEC.”

The NEC3 has a substantial impact on the fortunes of the parties who enter into it. And to be fair, as an NEC adjudicator and arbitrator myself, I vouchsafe that few users understand this animal

Mike Barlow goes on: “The sheer brevity of NEC3 gives rise to lack of detail, especially when NEC3 is compared with” - oh dear - “JCT 2009, which contains detailed provisions about the parties’ rights and obligations in different scenarios. As for the language on each page, being in the present tense is awkward, especially since everything to do with putting buildings up is in the past, late tense.”

The aim of his paper is to stimulate debate. This contract has a likely substantial impact on the fortunes of the parties who enter into that contract. And to be fair, as an NEC adjudicator and arbitrator myself, I vouchsafe that few, very few, users, lawyers, judges, adjudicators, ICE folk, or sweeper-upperers understand this animal. So Mike Barlow’s paper is worth reading (www.scl.org.uk). 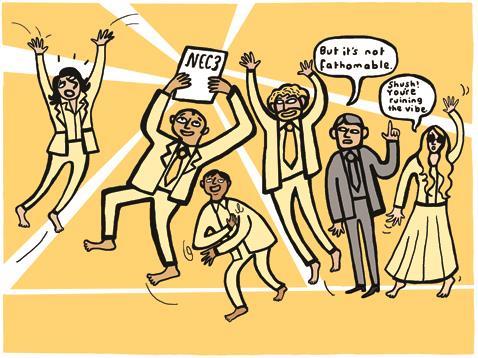 He also says the absence of various market standard provisions, and certain specific differences in NEC3’s risk profile, compared with conventional construction contracts, needs to be highlighted and dealt with. He recommends use of the hitherto despised Z clauses. In short, this very learned lawyer detects gaps - “traps for the unwary” - which ought to be filled sensibly, and the remedy is new, well-drafted and sensible Z clause clarifications. Hurrah! The Z clause device in NEC is intended precisely for all that. The Zs have, however, gained a reputation for “gotcha” small print.

Now it is plainly right that it was an awful mistake to write NEC in the language it now stands in. Lawyers are the folk who point construction customers towards which contract document to use. It hasn’t dawned on NEC that if lawyers can’t take comfortably to NEC, they will use JCT instead. Simple. Mike Barlow picks out clauses that are, he says, a masterpiece of obfuscation. Take the rigmarole of what is called the “pain/gain” mechanism. These rules need redrafting using more conventional language, and it’s no good that the evangelists are toffee-nosed about doing that.

It hasn’t dawned on NEC that if lawyers can’t take comfortably to NEC, they will use JCT instead

Come on NEC, play the lawyers to win them over. Stop kicking out. And what the blazes is meant by the expression “total of the prices?” It actually means “the price”. Why not say so? Elsewhere, there is a complete tangle where it says the only rights to a “compensation event” are changes to prices, completion date, and key dates. Barlow sees a quirk in the drafting, where the contractor has no entitlement to a compensation event - when it is plainly intended - behind the words on the face that compensation is payable.

The emperor’s new clothes come right off when Mike Barlow bravely ventures to suggest that the great sales pitch of NEC, and the one that attracted Sir Michael Latham to NEC, is not fathomable. It’s the one about the employer, the contractor and the project manager coming to the party and behaving via the contract, “in a spirit of mutual trust and co-operation”. Well, says Mr Barlow: “It is not clear how - IF at all - this requirement might effect the meaning of a particular provision.” Oh, what a spoilsport you are, Mr Barlow. This magic dust clause is put in front of me as adjudicator as an answer to everything. And I say yes, yes of course.

Where were we? Ah yes, the Z clauses and what’s to be done. Easy, read his prize paper. Like it or lump it, but read it at least.

This article was published under the headline: “Religious education”.