We’re in a party mood this week, as we toast the Building Awards 2011 finalists at an exclusive, and very sartorially aware, London venue. Now, has anyone seen my bow tie?

The Met Bar, famed as the achingly trendy hangout of Kate Moss and the Gallaghers at the height of their Britpop fame in the nineties, is back. Last week it hosted a new wave of stars - the candidates for the Building Awards 2011. No cocaine, but plenty of wine and superb, freshly baked cheese twists. It has certainly maintained its exclusivity as well, with one slightly more casually dressed Building host refused a beer from the bar. Meanwhile, one nominee, attempting to free her feet from the prison of her high heels, was told to put them back on. Oh it’s a glamourous world, construction.

Confusion still reigns over the fate of regeneration body, the London Development Agency, which got no funding in the Comprehensive Spending Review. With just three weeks left until the new financial year, it is yet to secure a finalised settlement, although sources suggest a provisional agreement has been reached. But why did the LDA not get any money in the CSR? The latest rumour is that London mayor Boris Johnson’s economic development adviser, Anthony Browne, simply forgot to put in a bid for it. Which probably indicates how high the body is on the mayor’s priority list.

The Heating and Ventilating Contractors’ Association (HVCA) used to hold an annual dinner, rather than a lunch, for guests and press. However, a mixture of free-flowing booze and bizarre behaviour from guest speakers put paid to the event a few years ago. One well known speaker got so sozzled at one dinner the HVCA was forced to hold back half of his fee. Another year John Prescott was apparently so bewildered at an event that he was overheard exclaiming: “Who are these people?!” to a fellow guest. Another year, restless members spent the entire speech (by Austin Mitchell MP) popping helium balloons at the back of the hall. A wistful Robert Higgs, chief executive of the HVCA, said that despite the mishaps most members reported they enjoyed the old format.

A word of warning to housebuilders wishing to show off their green credentials: don’t scare off the punters. Mark Clare, chief executive of Barratt Homes, offered a cautionary tale to firms wishing to market their ecological wares at last week’s Ecobuild conference. Clare said the housebuilder was so pleased with its ecological innovations on a residential development in Southampton, that it decided to put its technology on display behind a glass wall in the show home. Unfortunately this had exactly the opposite effect on punters. The display “frightened the life out of customers”, Clare said.

Last week’s Ecobuild was judged to be a resounding success, even if delegates felt they were attending a sustainability conference in an airport terminal. A heavyweight lineup of BBC presenters chaired the debates: Kirsty Wark, Sarah Montague, Justin Webb, Stephen Sackur and Ed Stourton. But with three Today presenters at the event, you do wonder who was manning the ship at the Radio 4. And what do you have to do to land the tenacious interviewer John Humphrys?

One topic of conversation at the Building Awards shortlist bash was Hansom favourite, Noble Francis, head economist at the Construction Products Association. At a black tie do at Lords last year, Francis disappeared for a while into the toilets, and came back with an artfully undone bow tie draped over his dress shirt. I hear he looked rakish, almost like David Bowie in Let’s Dance. However it was noted that he had simply replaced a clip-on with an undone tie he had cunningly brought in his pocket. To be fair, who hasn’t done this at least once? They are a nightmare to get right. 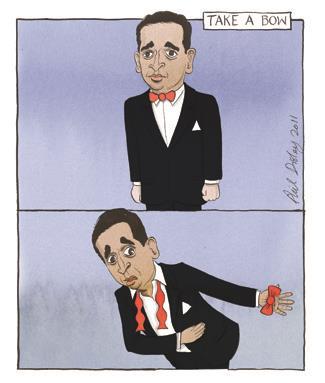